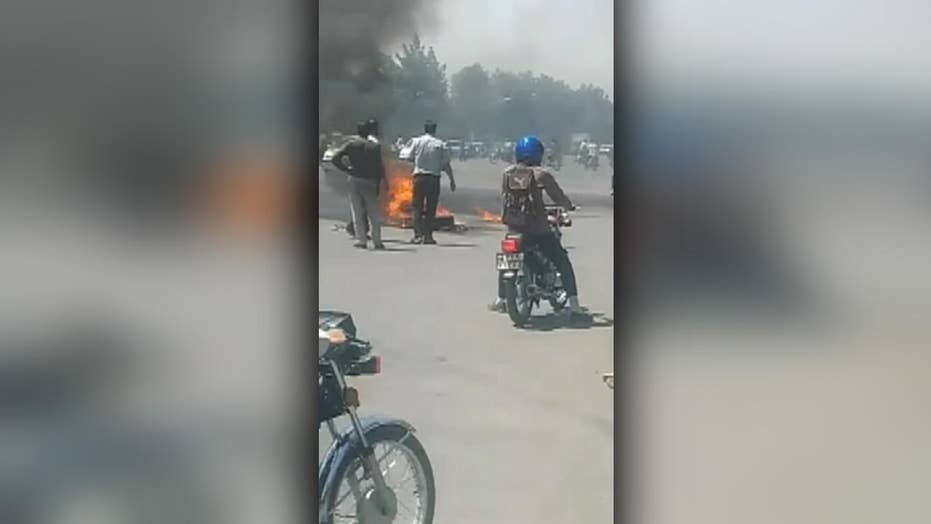 Video shows protests in Iran against government corruption and the state of the economy.

Iranians protested for a third day in a row against the clerical regime that they blame for running the economy into the ground.

Protesters have long complained of regime corruption and mismanagement that has led to severe water shortages and significant price hikes on basic foodstuffs. Another big complaint is its spending on its foreign adventurism in places such as Syria and Yemen, while ignoring problems at home, which seems to have pushed ordinary Iranians over the edge as they risk prison or worse.

According to the National Council of Resistance of Iran (NCRI), the protests are growing. A spokesman told Fox News that the regime has arrested many protesters, and have dealt with them violently. He also said the authorities have used water cannons and tear gas to halt the protesters.

A video circulating on Twitter shows protesters marching in the Iranian capital of Tehran Thursday evening: #IranProtests against Khamenei’s regime reach the capital Tehran tonight w/chants of “The mullahs must get lost (video via MEK in Vali Asr Street) For 3 days protests have rocked Iran’s major cities #FreeIran2018

Another Tweet showed protesters in Arak shouting, “No to Gaza, No to Lebanon. My life for Iran.”

Iran analyst Behnam Ben Taleblu, a research fellow at the Foundation for the Defense of Democracies (FDD), in Washington, D.C., said the words of the protesters are significant.

“The chants by the brave, chador clad women of Najafabad in Isfahan province, which used to be a traditional bastion of regime support said it best: ‘They fed Syria, but made our young people turn old.’ Iranian protestors recognize that the regime in Tehran does not have their best interests at heart, and will continue to divert national treasure towards its ideological contests abroad,” he said.

Ben Taleblu said it’s significant that the very people who have been the backbone of support for the regime are now protesting against it. “Although Tehran is yet to respond with the same type of force deployment seen in 2009, these protests present a larger problem for the regime’s leadership than previous movements. They represent those whom the regime relied upon in the past, such as day laborers, the urban and rural poor, and even select religious classes. In a sense, the regime’s social base is turning against it, indicative of the growing cleavage between state and society in Iran.”

A spokesman for Texas Republican Senator Ted Cruz, who has long called for supporting Iranian protesters, told Fox News: “Senator Cruz believes that the United States should be doing everything possible to support these protesters. These are people who have been bravely taking to the streets for months to speak out against the ayatollahs, who brutalize and repress them, and who spent Iran’s windfall from the Obama Iran deal on terrorism, and bolstering Assad, instead of on Iran’s citizens.”

Maryam Rajavi head of the NCRI, in a statement, said that, “I salute all the women and youth who waged a staunch resistance today against the criminal revolutionary guards, Bassij, and plain clothes agents. Iran’s risen and revolting cities are joining the protests, one after the other. The cry for freedom is becoming louder, and the uprising is expanding more and more every moment. There is no force more powerful than the united force of young people.”

Farhan Haq, a spokesman for the United Nations Secretary General António Guterres, told Fox News that, “We once more emphasize, as we do with all such protests, that the rights … of their freedom of expression and peaceful assembly needs to (be) respected by all including the security forces.”

He declined to say whether Guterres had been in touch with Iranian authorities over the protests.