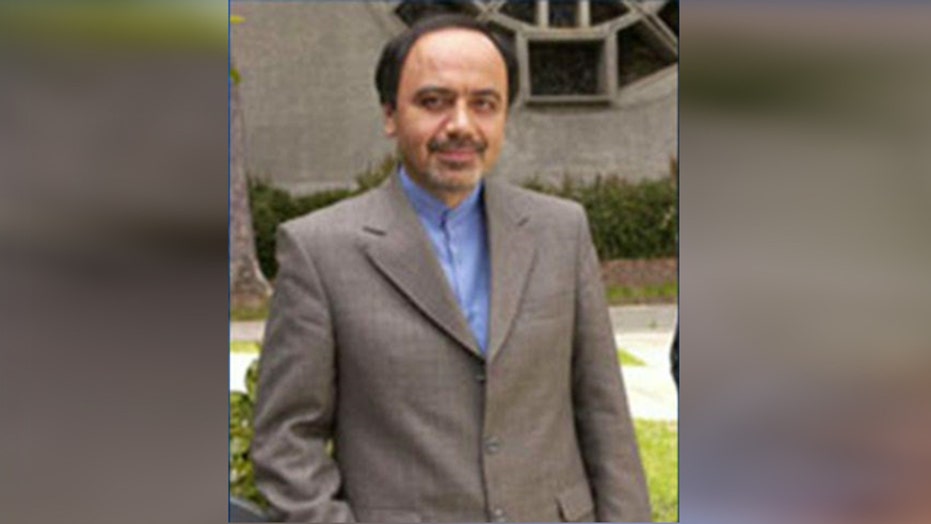 The man Iran intends to send to America as its new United Nations ambassador is accused of helping organize the political assassination of an Iranian dissident in Italy, but has never been charged by authorities.

Hamid Aboutalebi is at the center of a controversy over whether the Obama administration and the State Department will grant him a visa to come to the U.S.

He has been accused of being an accomplice in a brazen murder plot that killed a prominent Iranian government defector, Mohamed Hossein Naghdi, 42, who was shot dead in Rome as he was being driven to work on March 16, 1993.

"I think that Aboutalebi was involved in the death of my partner," Naghdi's companion of 17 years, Ferminia Moroni said. "All roads lead to the Iranian embassy in Rome and the ambassador."

At the time of Naghdi's murder, Aboutalebi had completed his stint as Iran's ambassador to Italy.

"Hamid Aboutalebi definitely was not only involved in the political assassination of Naghdi, but he was actually the mastermind," charges Alireza Jafarzadeh, the Washington, D.C. based Deputy Director of the National Council of Resistance of Iran, also referred to as the MEK, the group for which Naghdi worked.

"The story is another nasty and calculated attempt by MEK riding on recent news wave about Ambassador Aboutalebi using all media as their bugle," Iran U.N. Mission spokesman Hamid Babaei told Fox News in a statement. "It's just mockery of professional journalism to consider all these nonsense as evidence for fair and objective reporting."

The Iranian Foreign Ministry also defends Aboutalebi, calling him fully competent for the post and giving no indication that it plans to pull the appointment.

Until now, opponents of the U.S. granting Aboutalebi a visa have focused on his role as a member of the student militant organization that stormed the U.S. embassy in Tehran in 1979, sparking the Iranian hostage crisis that held 52 American diplomats hostage for 444 days.

He has told Iranian media that he was only a translator for some of the freed hostages and was not part of the initial embassy takeover. He later went on to become a veteran Iranian diplomat.

But the U.S. State Department has called his appointment as U.N. ambassador "extremely troubling" and the White House has called it "not viable."

Naghdi was shot in the face by two unknown gunmen who fired multiple shots from an automatic weapon from a motorbike that pulled alongside his car.

He had once served as the Iranian charge d'affaires in Rome, before defecting from Tehran in 1982.  At the time of his killing, Naghdi was head of the Rome office of the National Council of Resistance of Iran, the main opposition group.

A 1996 British Parliamentary Human Rights report titled “Iran: State of Terror,” concluded that "the regime in Iran assassinated Mr. Naghdi" because "he was the most important opposition figure in Italy."

The Iranian opposition says the accusations concerning the assassination come from Abolghasem Mesbahi, identified in Carabinieri (police) documents as a former high-ranking Iranian intelligence official who defected to Germany in 1996.

The documents say Mesbahi claimed Aboutalebi was "in charge and authorized from Tehran to direct the operation," and that "Aboutalebi and Naghdi knew each other since the 1979 revolution. The personal interest of Aboutalebi in the assassination of Naghdi was based on one hand on the religious obligation to carry out a fatwa, and on the other hand, was based on his knowledge… possibly as Ambassador and thanks to his long lasting knowing with the victim to be able to carry out his intention of killing possibly without risk."

"Did Aboutalebi have to ask permission from any authority in Iran for this project?" asked Carabinieri Major Carlo Wilhelm Messina, according to the papers.

"Certainly, he not only needed permission, but he would have had to formally request authorization."

The only person to stand trial for the murder was identified as Iranian government agent Mansour Amir Bozorgian, according to the documents. He was acquitted by a panel of Italian justices after he was tried in absentia in Rome on November 24, 2006 and in a second proceeding.

In announcing the verdict, Judge Giovanni Muscara wrote that for Mesbahi, "while in 1997 Aboutalebi was nearly alone responsible for the assassination, today he becomes a person who had to be informed as a member of the Pasdaran," or Iranian intelligence.

The panel of Judges declared that Mesbahi was "a credible witness" in a separate Iranian terror case that resulted in convictions in Germany, but that in the case against Bozorgian, "Mesbahi's voice is the only accusing voice" and there was no other proof of Bozorgian's involvement, let alone Aboutalebi's.

Mesbahi, who reports say now lives in Germany, recently publicly claimed that Iran was also behind the 1988 bombing of Pan Am 103 even though Libyan intelligence agent Abdel Baset al-Megrahi was convicted for it.

Iranian Deputy Foreign Minister Hossein Amir Abdollahian was quoted by Iranian media as calling the accusations "a smokescreen campaign at the behest of the Israeli regime...the report was fabricated in line with the Zionist regime lies."

Aboutalebi, who also has served Iran as an ambassador to Australia, Belgium and the European Union, never faced any charges. It is unclear if the reason was a lack of evidence, diplomatic immunity, or prosecutorial discretion. The Italian prosecutors would not comment on the case.

The lawyer in Naghdi's case does not know why the Italian government did not pursue possible charges against Aboutalebi.

"All the elements are against him," Paolo Sodani told Fox News, who called his appointment as U.N. ambassador, "scandalous."

"What is astonishing to me is, how can the U.S. allow someone who was involved in terror assassinations to come to this country and represent Iran at the United Nations?" the Council's Jafarzadeh told Fox News.

"At the time of Naghdi's assassination, U.S. officials said that the assassination was part of a larger terror campaign by Iran, but now they are keeping silent. This is inconsistent and unacceptable."

Last week, Aboutalebi was called "an acknowledged terrorist " by Texas Republican Senator Ted Cruz, who has sponsored a Senate bill that would bar the Iranian from the United States. The bill passed the Senate and is awaiting a vote in the House before going to President Obama's desk for a possible signature.

Former President Jimmy Carter, on the other hand, has said that it would be "inappropriate" for the United States to try to block Aboutalebi from taking up the U.N. post. The American hostages were taken on Carter's watch and only released on the day Ronald Reagan was inaugurated, January 20th, 1981.

There is no word on the status of Aboutalebi's visa, since the U.S. State Department cites confidentiality. If he is allowed into the United States, he will arrive in New York and take up residence in the elegant Fifth Avenue limestone mansion that is home to Iran's U.N. representative, where he will promote Tehran's policies at the world body.

Jonathan Wachtel contributed to this report.