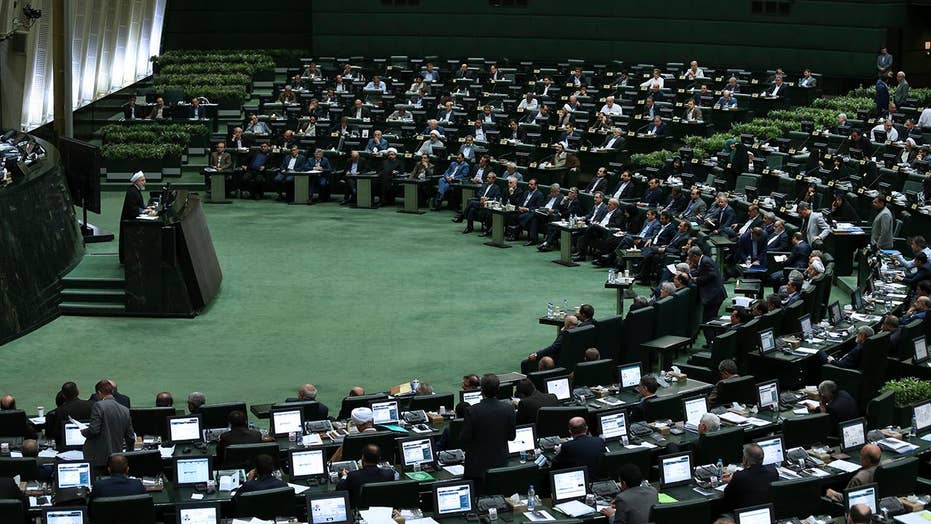 Iranian lawmakers order President Rouhani to answer for his role in the faltering economy; Benjamin Hall reports on the growing political divisions in the country.

Iran's president attempted to explain to parliament on Tuesday how he would pull the country out of its economic nosedive, taking shots at the U.S. before lawmakers voted to reject his explanation.

Iranian lawmakers had ordered President Hassan Rouhani to answer for his role in the faltering economy amid growing political divisions in the country. Rouhani claimed that newly reimposed U.S. sanctions after President Trump pulled out of the 2015 nuclear deal would only serve to unify the country, according to Reuters.

“I want to assure the Iranian nation that we will not allow the U.S. plot against the Islamic Republic to succeed,” he told parliament. “We will not let this bunch of anti-Iranians in the White House be able to plot against us.”

Iran's currency, the rial, has lost more than two-thirds of its value in a year while the official unemployment rate sits at 12 percent. Youth unemployment, however, is as high as 25 percent in a country where 60 percent of the 80 million population is under 30, according to Reuters.

Earlier this year, nationwide protests erupted over economic anxiety, and lawmakers fired Rouhani's labor and finance ministers this month amid the economic crisis.

Speaking Tuesday before parliament, Rouhani said those protests only strengthened Trump's hand to pull out of the atomic accord.

"This lured Trump into saying that he will not remain in the deal," Rouhani said.

Rouhani failed to convince parliament on Tuesday that his plans will pull the country out of an economic nosedive worsened by America's withdrawal from the nuclear deal, further isolating his relatively moderate administration amid nationwide anger. (AP Photo/Vahid Salemi)

Lawmakers, however, were not satisfied with the president's answer and voted four separate times to say they were unconvinced of his answers about Iran's recession, its cratering currency, unemployment and smuggling, according to the Associated Press.

Those questions now could go to Iran's judiciary for further review, serving as a warning to the cleric his political stature is slipping.

In recent days, rhetoric from Iran has increased as a top Iranian Navy general said that the country has taken full control of the Strait of Hormuz and Persian Gulf.

Military officials echoed similar statements on Tuesday at a briefing with reporters at the Pentagon.

"For decades, our forces have been posted in the Gulf, to ensure freedom of navigation and we will continue to do that," said Joseph Dunford, chairman of the Joint Chiefs of Staff."