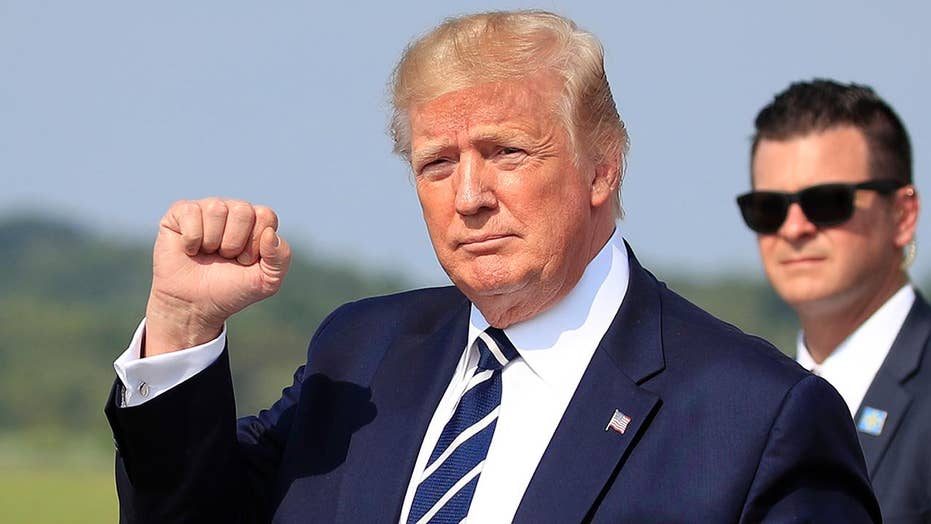 Trump calls Iran 'nothing but trouble' after tankers seized

Iran seized a British-flagged oil tanker in the Strait of Hormuz Friday and briefly detained a second, marking a fresh escalation of tensions between Tehran and the West.

The U.K.-flagged Stena Impero, which has 23 crew members of Indian, Russian, Latvian and Filipino nationalities aboard, “was approached by unidentified small crafts and a helicopter during transit of the Strait of Hormuz while the vessel was in international waters,” Stena Bulk, the shipping company that owns the vessel, said in a statement. "We are presently unable to contact the vessel which is now heading north towards Iran."

Iran's Revolutionary Guard forces, in a statement on their website, say the ship was seized for "non-compliance with international maritime laws and regulations" and is being brought to an unnamed Iranian port, according to the Associated Press. Websites tracking the ship's path showed it turn sharply in the direction of Iran's Qeshm Island, instead of its intended destination of Saudi Arabia.

“We are urgently seeking further information and assessing the situation following reports of an incident in the Gulf," a U.K. government spokesperson told Fox News.

Stena Bulk says "there have been no reported injuries and their safety is of primary concern to both owners and managers." 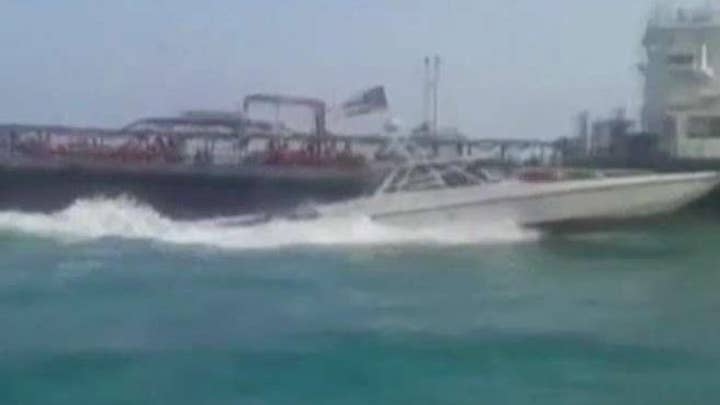 Approximately an hour later, a Liberian-flagged tanker Mesdar was also seized by Iran's Islamic Revolutionary Guard Corps (IRGC) and was seen on maritime tracking services making a turn toward Iran. However, the tanker's owner later said the ship was briefly boarded by armed guards before being allowed to go. Iran's semi-official Fars news agency tweeted that the Mesdar had left Iran's territorial waters.

"These seizures are unacceptable," British Foreign Secretary Jeremy Hunt said as he prepared to enter an emergency government meeting Friday night. "It is essential that freedom of navigation is maintained and that all ships can move safely and freely in the region."

"We're not looking at military options, we're looking at a diplomatic way to resolve the situation, but we are very clear that it must be resolved," Hunt later told Sky News, warning that if the situation is not resolved quickly "there will be serious consequences."

President Trump said Friday that Iran is "nothing but trouble" and that "we heard one, we heard two," tankers were seized.

"Iran is showing their colors," the president told reporters before departing the White House to spend the weekend at his golf club in Bedminster, N.J. "Iran is in big trouble right now. Their economy is crashing, it's coming to a crash ... It's very easy to straighten out or it's very easy for us to make it worse."

"This is the second time in just over a week the UK has been the target of escalatory violence by the Iranian regime," National Security Council Spokesman Garrett Marquis said. "The U.S. will continue to work with our allies and partners to defend our security and interests against Iran's malign behavior."

The Pentagon had no official statement on the situation, but Fox News has learned that there are no current plans for U.S. naval vessels to escort commercial ships through the strait.

Late Friday, U.S. Central Command (CENTCOM) said the U.S. had intensified air patrols over the Strait of Hormuz. CENTCOM spokesman Lt. Col. Earl Brown said that U.S. Naval Forces Central Command had been "in contact with U.S. ships operating in the area to ensure their safety." 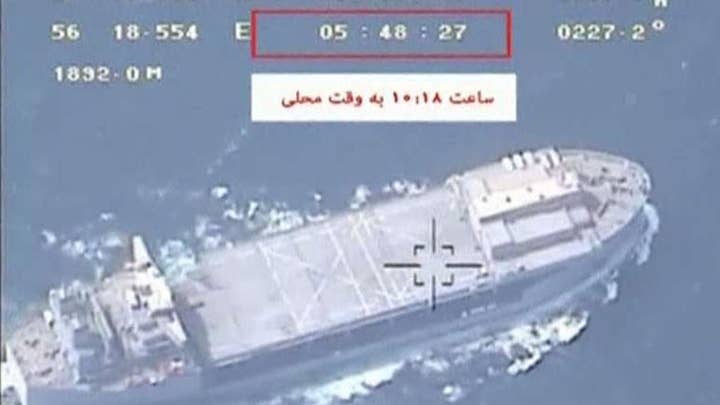 Late Friday, CENTCOM announced Operation Sentinel, what it described as "a multinational maritime effort ... to increase surveillance of and security in key waterways in the Middle East to ensure freedom of navigation in light of recent events in the Arabian Gulf region.

"The goal of Operation Sentinel is to promote maritime stability, ensure safe passage, and de-escalate tensions in international waters throughout the Arabian Gulf, Strait of Hormuz, the Bab el-Mandeb Strait (BAM) and the Gulf of Oman," the CENTCOM statement went on. "This maritime security framework will enable nations to provide escort to their flagged vessels while taking advantage of the cooperation of participating nations for coordination and enhanced maritime domain awareness and surveillance. While the United States has committed to supporting this initiative, contributions and leadership from regional and international partners will be required to succeed."

The seizures come two weeks after British Royal Marines seized a tanker off the island of Gibraltar that authorities said carried oil bound for Syria in violation of European Union sanctions. Iran warned Britain that it would face "repercussions" over that seizure, which Tehran called “mean and wrong." Last week, a British warship blocked three Iranian vessels from seizing another U.K.-flagged tanker.

UK Chamber of Shipping CEO Bob Sanguinetti said in a statement that the seizure was "in violation of international regulations which protect ships and their crews as they go about their legitimate business in international waters" and called on the British government to do "whatever is necessary" to ensure the safe and swift return of the ship's crew.

Earlier Friday, Iran and the United States emphatically disagreed over Washington's claim that a U.S. warship downed an Iranian drone near the Persian Gulf. American officials said they used electronic jamming to bring down the unmanned aircraft, while Iran said it simply didn't happen.

Neither side provided evidence to prove its claim. 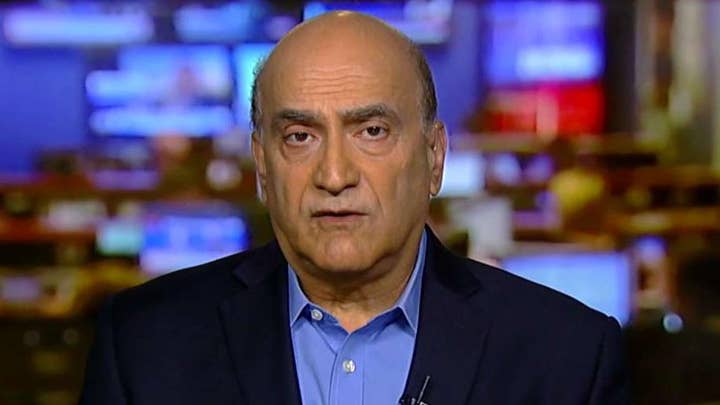 At the White House on Friday, President Trump said flatly of the Iranian drone: "We shot it down." But Pentagon and other officials have said repeatedly that the amphibious assault ship USS Boxer actually jammed the drone's signal, causing it to crash, and did not fire a missile. The officials spoke on condition of anonymity to discuss sensitive technology.

"There is no question this was an Iranian drone, and the USS Boxer took it out as the president announced yesterday because it posed a threat to the ship and its crew," National Security Adviser John Bolton said. "It's entirely the right thing to do."

In Tehran, the Iranian military said all its drones had returned safely to their bases and denied there was any confrontation with the USS Boxer.

Maritime security in the Strait of Hormuz has deteriorated in recent weeks after six attacks on oil tankers that the U.S. has blamed on Iran -- an allegation the Tehran government denies. The incidents have jolted the shipping industry, with some of the 2,000 companies operating ships in the region on high alert and many ordering their vessels to transit the Strait of Hormuz only during the daylight hours and at high speed.

Of the roughly 2,000 companies that operate ships in the Persian Gulf, only a handful of companies have halted bookings outright.