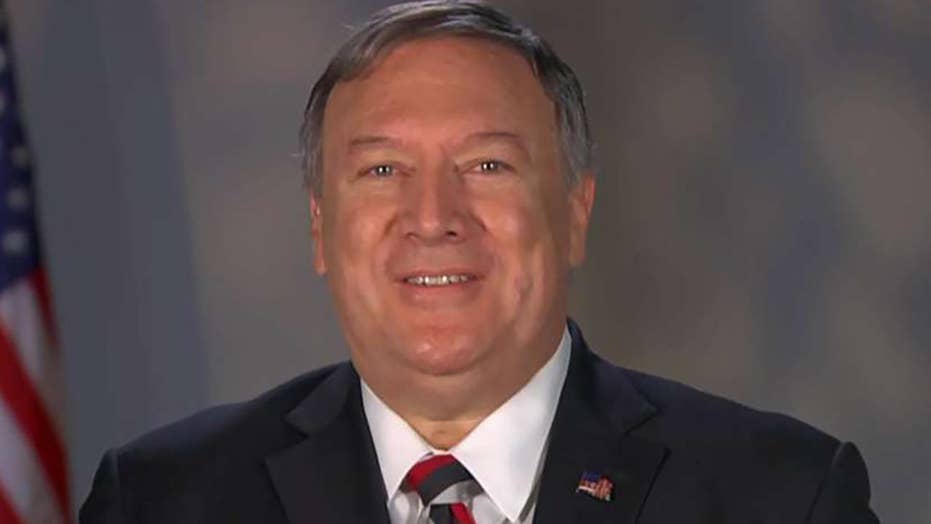 Secretary of State Mike Pompeo joins 'Fox &amp; Friends' to discuss his meetings with Mexico and El Salvador on reducing illegal immigration and weighs in on global tensions with Iran.

President Trump on Monday dismissed as "more lies and propaganda" claims out of Iran alleging authorities there had disrupted a CIA spy ring and sentenced several of the plotters to death -- a development that threatened to further inflame an already precarious staredown between the Islamic Republic and the United States.

Trump's tweet, which also mentioned an Iranian drone shot down by the U.S. Navy last week after the unmanned vehicle wandered too close to the USS Boxer, echoed comments made earlier in the morning by Secretary of State Mike Pompeo and cast Tehran as flailing amid tough U.S. sanctions that threatened to strangle its economy.

"The Report of Iran capturing CIA spies is totally false. Zero truth," Trump wrote. "Just more lies and propaganda (like their shot down drone) put out by a Religious Regime that is Badly Failing and has no idea what to do. Their Economy is dead, and will get much worse. Iran is a total mess!"

The roundup of the alleged espionage cell ensnared 17 people during the past several months and was completed by the end of March, an Iranian official said at a news conference in Tehran. The official was identified only as the director of the counterespionage department of Iran’s Intelligence Ministry, which is highly unusual in Iran, as officials usually identify themselves at press conferences.

"The identified spies were employed in sensitive and vital private sector centers in the economic, nuclear, infrastructural, military and cyber areas...where they collected classified information," said a ministry statement read on state television.

Pompeo, while not commenting directly on the spy report, advised caution and noted Iran has a history of lying.

"I can’t add much to it specifically," Pompeo told "Fox & Friends" on Monday morning. "I would urge everyone who’s reading that story that the Iranian regime has a long history of lying. They lied about where they shot down the American UAV, they now lied about where they took down this tanker. It’s part of the nature of the Ayatollah to lie to the world. I would take with a significant grain of salt any Iranian assertion of Iranian actions taken. "

Pictures of some of the alleged spies were reportedly shown on state TV, which also broadcast a documentary purporting to show a CIA officer recruiting an Iranian in the United Arab Emirates.

Tehran also announced in June the takedown of a CIA spy ring, but it was not immediately clear if those alleged spies were the same as those referenced Monday.

Iran's semi-official Fars news agency was the first organization to report on the matter, according to Reuters. The identities of those arrested were not immediately known.

The U.S. has increased its military presence in the Persian Gulf region in recent weeks after it alleged provocative moves by Tehran that included attacks on two oil tankers in the Strait of Hormuz, the downing of a U.S. drone and the seizure of a British tanker.