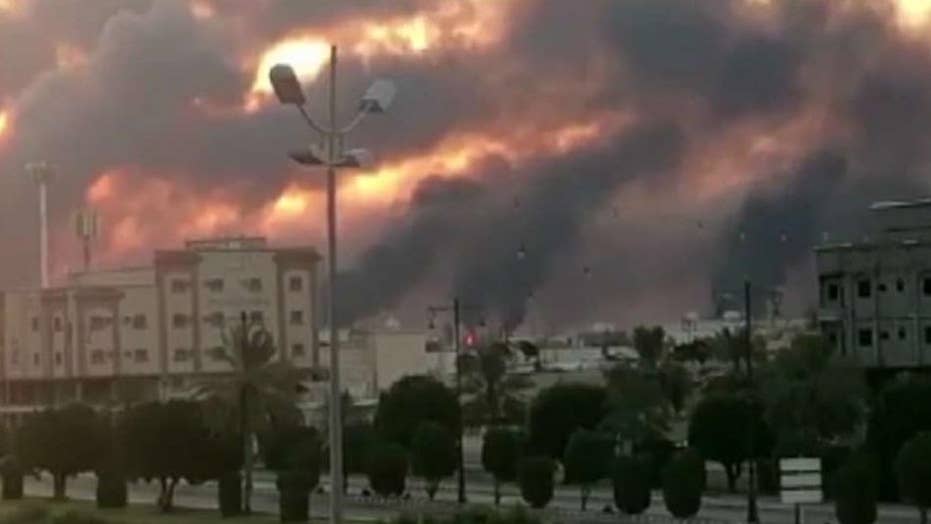 U.S. and Saudi forensic teams have been collecting and analyzing the remains of weapons that were used in the attack; chief White House correspondent John Roberts reports.

Iranian officials looking to hit back at the U.S. over crippling economic sanctions and its withdrawal from a nuclear deal initially considered attacking American bases before launching airstrikes on a massive Saudi Arabian oil facility instead, a new report claims.

The decision to target the facility owned by Saudi Arabia’s Aramco state-run oil company on Sept. 14 came after top Iranian military officials huddled for a series of meetings in Tehran – one of which was attended by Supreme Leader Ayatollah Ali Khamenei, who ultimately signed off on the attack, officials familiar with the discussions told Reuters.

“It is time to take out our swords and teach them a lesson,” a senior commander of Iran’s Revolutionary Guard Corps unit reportedly said during the first gathering in May.

US pressure on Iran is working: Retired general

The officials told Reuters that the military brass assembled for at least five meetings at a heavily fortified compound in Tehran. They initially weighed striking a Saudi Arabian seaport, an airport and U.S. military installations, but scrapped the ideas over fears that they would prompt mass casualties and a harsh response from the U.S., the officials added.

“Agreement on Aramco was almost reached unanimously,” one official told Reuters. “The idea was to display Iran’s deep access and military capabilities.”

It is not immediately clear what the locations are of the U.S. bases, Saudi Arabian seaport and airport that were said to be considered as initial targets.

The officials said Khamenei approved the oil field strike in early September but insisted his forces avoided hitting any civilians or Americans.

The extent of the damage at the oil facility following the strikes. (Reuters)

More than 100 contractors fled the site following the attack, in which there were no injuries, the Associated Press reported in September.

But the strikes temporarily knocked out 5 percent of the world’s oil supply, according to Reuters.

The drones and missiles used in the barrage were launched from an airbase in southwest Iran and flew over Iraq and Kuwait before hitting their targets in Saudi Arabia, two other sources told Reuters. That route – less direct than simply traveling across the Persian Gulf – was chosen in an attempt to conceal Iran’s involvement, one of the sources added.

A spokesperson for the Iranian Mission to the United Nations in New York, when asked by Reuters about the meetings, said they never happened and Khamenei never approved such military operations.

Workers are seen at the damaged site of Saudi Aramco oil facility in Abqaiq, Saudi Arabia, in September.

The Islamic Republic has repeatedly denied being behind the oil field attack. The Iran-backed Houthi rebels in Yemen have claimed responsibility for it, but U.S. Secretary of State Mike Pompeo has said the strikes were “unquestionably sponsored by Iran” and were an “act of war” against Saudi Arabia.