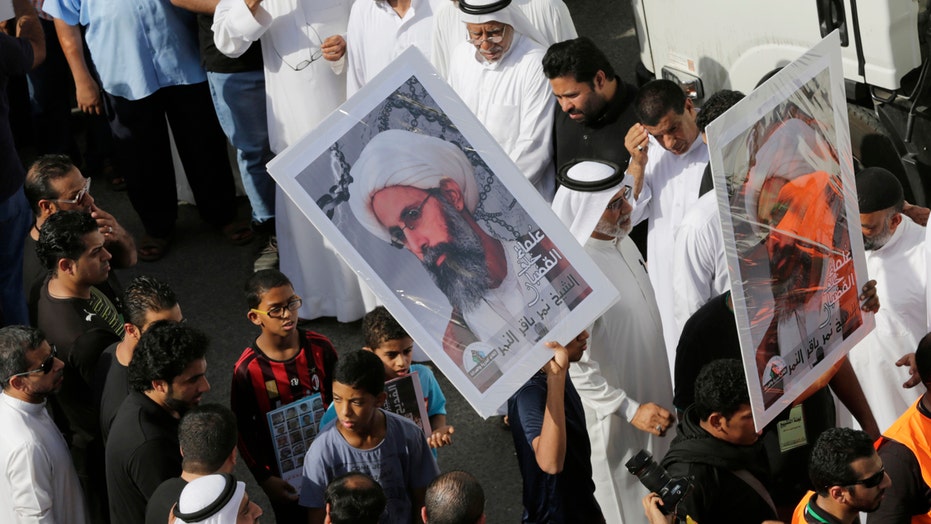 Sheikh Nimr al-Nimr, a central figure in the 2011 Arab Spring-inspired protests in Saudi Arabia, was one of 47 prisoners executed in the kingdom after being condemned to death on terrorism charges.

Iranian Foreign Ministry spokesman Hossein Jaberi Ansari said the execution of al-Nimr, “who had no means other than speech to pursue his political and religious objectives, only shows the depth of imprudence and irresponsibility.” His statement was carried by state-run Press TV.

Iran's parliament speaker says the execution of al-Nimr will prompt a "maelstrom" in Saudi Arabia.

n the Iranian capital, a large crowd upset over the execution of Sheikh Nimr al-Nimr gathered outside the Saudi embassy and chanted anti-Saudi slogans. Some protesters threw stones and Molotov cocktails at the embassy, setting off a fire in part of the building, Iran's top police official, Gen. Hossein Sajedinia, told the semi-official Tasnim news agency early Sunday.

In comments posted on Iranian state television's website, Ali Larijani said, "Nimr's martyrdom will put Saudi Arabia in a maelstrom. Saudi will not pass through this maelstrom

“The execution of Nimr al-Nimr strengthens our existing concerns about the growing tensions and the deepening rifts in the region,” the ministry said in a statement which condemned the the mass executions. Germany does not allow the death penalty.

Lebanon’s top Shiite cleric condemned al-Namir’s execution as well, calling it “a grave mistake that could have been avoided with a royal amnesty that would have helped reduce sectarian tensions in the region.”

"We have warned the concerned sides that any such reckless act means a catastrophe for the nation," said Sheikh Abdul-Amir Kabalan — deputy head of the influential Supreme Shiite Islamic Council, the main religious body for Lebanon's 1.2 million Shiites.

"For a very long time we have expressed our differences with the Saudi government with respect to human rights said, Deputy White House National Security Advisor Ben Rhodes in a statement released Saturday evening. "What I would also say is for there to be greater stability, safety and security across the region there needs to be improved relations between the communities in the Middle East certainly Sunni and Shia communities. So that is necessary to deal with the broader issues in the region.  That’s been an ongoing source of discussion between us and Saudi Arabia."

She said al-Nimr was convicted in an "unfair" trial and that his execution "is only adding to the existing sectarian discord and unrest."

"Saudi Arabia's path to stability in the Eastern Province lies in ending systematic discrimination against Shia citizens, not in executions," she said.

The Interior Ministry announced the names of the 47 people executed in a statement carried by the state-run Saudi Press Agency. Saudi state television also reported the executions.

Al-Namir’s, brother, Mohammed al-Namir, also took to Twitter to express his outrage at the execution.

"You are wrong, uncertain and mistaken if you think that killing will stop demands for rights. We remain peacefully demanding reform and change in our country," he wrote.

His son Ali, the cleric's nephew, is also facing execution, but his name was not among those listed Saturday. Amnesty International describes Ali al-Nimr as a juvenile offender because he was 17 years old in February 2012 when he was arrested. He was later convicted, and his death sentenced upheld, on charges of attacking security forces, taking part in protests, armed robbery and possessing a machine-gun.

Of those executed, 45 were Saudi citizens, one was from Chad and another was from Egypt.

One of the executed was Faris al-Shuwail, a leading ideologue in Al Qaeda’s Saudi branch who was arrested in August 2004 during a massive crackdown on the group following a series of deadly attacks.

The executions occurred Saturday throughout the kingdom, including in the capital of Riyadh.

Al-Nimir had been one of the more vocal critics of Bahrain’s Sunni-led monarchy, which suppressed the 2011 Shiite-led protests. Saudi Arabia sent troops to help Bahrain quash the uprising, fearing it would spread.

Amnesty International has called the verdict against the cleric, who was in his mid-50s, part of a campaign by Saudi authorities to "crush all dissent."

Before his arrest in 2012, al-Nimr had said the people do not want rulers who kill and carry out injustices against protesters. He was asked at his trial if he disapproves of the Al Saud ruling family.

"If injustice stops against Shiites in the east, then (at that point) I can have a different opinion," the cleric responded, according to his brother Mohammed, who attended court sessions and spoke to The Associated Press before the verdict.

Al-Nimir didn’t deny the political charges against him, but claimed he never carried a weapon or called for violence.

In announcing the verdicts, Saudi state television showed mugshots of all those executed. Al-Nimr was No. 46, expressionless with a gray beard, his head covered with the red-and-white scarf traditionally worn by Saudi men.

After listing the names and images of those executed, Saudi state television showed black-and-white footage of previous terror attacks in the kingdom, one showing bodies in a mosque after an attack. Soft, traditional music played in the background.

Saudi Arabia carried out at least 157 executions in 2015, with beheadings reaching their highest level in the kingdom in two decades, according to several advocacy groups that monitor the death penalty worldwide.

Coinciding with the rise in executions is the number of people executed for non-lethal offenses that judges have wide discretion to rule on, particularly drug-related crimes.