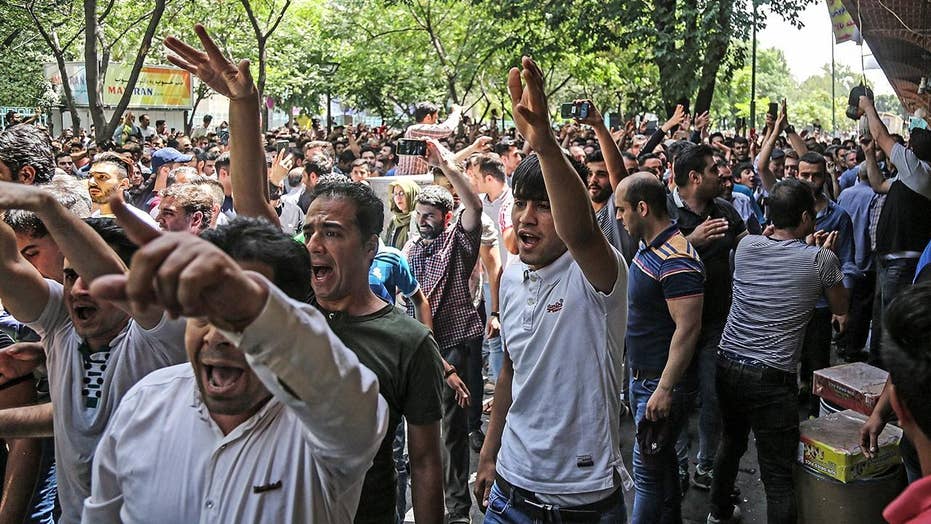 Iran protests: What to know

Days of unprecedented protests aimed at Iran's sluggish economy along with "biting" sanctions imposed by President Trump are ramping up pressure Tuesday on the Islamic Republic's ruling class and causing many analysts to wonder if regime change could be on the horizon.

Videos circulating on social media purportedly taken from inside Iran show thousands of protesters marching through the streets. In one video, crowds leaving a soccer match are heard yelling "death to the dictator! Death to Khamenei! Death to Rouhani!" and "Islamic regime must get lost!” according to a translation tweeted by a Middle East analyst.

Another video said to be taken in Tehran shows idle buses lined up as far as the eye can see, with the same analyst reporting Iran’s government has refused to pay back its debts to a contractor that gives the drivers fuel, leaving them – and the thousands of Iranians they would have been transporting – stranded.

"Look at our situation. We've been waiting for 24 hours,” a bus driver is reported to have said in another clip. “How dare the regime sends money to Hezbollah and Palestine when the country is in trouble. Our revolution's aim wasn't to support dirty [Hezbollah leader] Hassan Nasrallah and we can be oppressed here. Enough."

A senior Trump administration official told Fox News the restored sanctions against Iran that went into effect at midnight are designed to constrict the revenue Iran uses to fund “terrorists, dictators, proxy militias, and the regime’s own cronies.”

Trump signed the executive order Monday to restore some of the sanctions that were lifted under the 2015 nuclear deal during the Obama administration. The executive order targeted transactions involving U.S. dollars, as well as the country’s automotive sector, the purchase of commercial planes and metals, including gold.

In November, the administration says it will restore sanctions on Iran’s oil and gas and banking sector.

An administration official said the U.S. will aggressively enforce these sanctions, potentially subjecting even allied businesses to penalties.

“Individuals or entities that fail to wind down activities with Iran risk severe consequences,” said Trump in a statement.

Trump on Tuesday added he is “asking for WORLD PEACE, nothing less!”

The uncertainty caused by the re-imposition of the sanctions have proved devastating for the Iranian economy, which was already weakened by decades of previous sanctions and mismanagement and theft by high-ranking officials. Iran's rial now trades over double its government-set rate to the U.S. dollar, the Associated Press reported, and has lost nearly 80 percent of its value compared to last year at this time, according to the New York Times.

"We are facing an economic war and the U.S. government is restoring sanctions and also trying to increase them," the new governor of the Central Bank of Iran, Abdolnasser Hemmati, told the Associated Press on Sunday. "But our government is powerful...and is capable of opening up the foreign currency market on the same day."

Iranian President Hassan Rouhani on Monday, meanwhile, said in a television interview he has “no preconditions” for talks with America and his country can rely on China and Russia to help its oil and banking sectors as the U.S. ramps up sanctions in the coming months.

And Britain, France and Germany have been working with Iran, China and Russia to salvage the Iran deal, which the Trump administration pulled the U.S. out of.

“We are determined to protect European economic operators engaged in legitimate business with Iran…the preservation and maintenance of effective financial channels with Iran, and the continuation of Iran’s export of oil and gas,” a joint statement from Great Britain, France, Germany and the European Union said.

But regardless of European and Asian support, the protests are continuing in Iran – and show no signs of stopping.

In Mashad, the country’s second-largest city, demonstrations were captured on video Monday after a cleric told the public to take to the streets because the government isn't fulfilling its promises, according to The Wall Street Journal. Another video reportedly showed crowds chanting insults about security forces in the city of Kazerun.

The protests have also turned deadly, as one demonstrator was reported to have been killed in Karaj on Friday. Activists there told Al Arabiya that a young man was gunned down by security forces, while Iran’s Fars news agency claimed he was killed by unknown attackers.