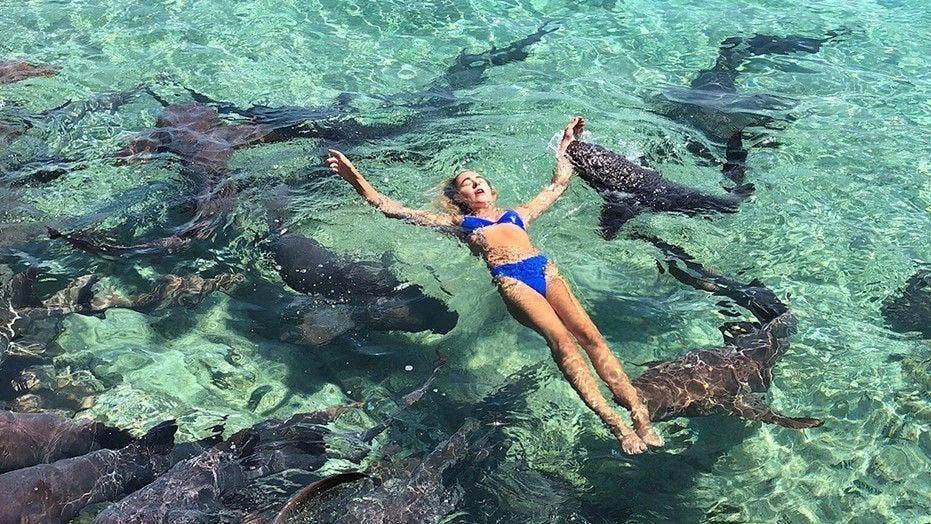 Instagram model bitten by shark while vacationing in Bahamas

In shocking before and after pictures, California native and Instagram model, Katarina Zarutskie is shown swimming with nurse sharks right before one of the animals attacked her and latched onto her arm.

An Instagram model said she’s fortunate to still have her arm after a nurse shark latched onto it and dragged her under water while the woman was swimming with a school of seemingly harmless sharks in the Bahamas last month.

Katarina Zarutskie, 19, an avid surfer from Laguna Beach, Calif., and a nursing student, told Fox News she was on vacation with her boyfriend and his family when locals told her about the opportunity to swim with nurse sharks in Staniel Cay. She added the locals were “very encouraging” in telling her to try the activity.

Her boyfriend's father captured the moment when the nurse shark bit her arm. (Katarina Zarutskie)

“We had seen all these nurse sharks swimming around the marina and I had already known, because I’ve surfed my whole life [that nurse sharks are relatively harmless]…I thought it was safe and I saw kids snorkeling, and against my boyfriend’s family’s wishes I thought it would be fine,” Zarutskie said.

The nursing student recalled everything being fine when she first entered the water — until she leaned back and held her arms out. Her boyfriend’s father was snapping pictures and captured the moment the shark sank its teeth into her arm and pulled her under.

Zarutskie said she was pulled under immediately after she was bitten. (Katarina Zarutskie)

"It was very scary. I was pulled under and I'm very fortunate it was a minor situation. It could have been way worse...they could have all started to attack given that they have a pack mentality,” Zarutskie said.

She was able to rip the shark off her arm and stop the bleeding long enough to get out of the water. (Katarina Zarutskie)

She added: "Everyone said they could hear the bite. They said it sounded like a big vacuum seal sort of thing...it all happened very fast. I wasn't screaming and crying. I was staying very calm."

Zarutskie said her past training for surfing and scuba diving quickly kicked in and helped her in the situation. She said she’s “very blessed” she was able to quickly rip her arm out of the shark’s mouth and cover the wound to prevent blood from getting to the other sharks lurking around.

The 19-year-old said it's been a journey treating the wound to have it heal completely. (Katarina Zarutskie)

"If [the shark] would have got my hand in a different way, I probably wouldn't have been able to get my hand out,” she said.

Staniel Cay marina owner David Hocher told NBC News there was a warning sign posted in the area stating visitors must “swim with the sharks at your own risk.” He added it appeared the Instagram model went in the water during feeding time.

The Instagram model said she still loves sharks and the wildlife despite the scary situation. (Katarina Zarutskie)

Zarutskie told Fox News she didn’t see a sign where she entered and would have never gone in the water if they were feeding the sharks.

Zarutskie said she isn’t placing blame on anyone for the incident. She believes the bite was “all a big accident” and the shark may have mistaken her for a piece of food.

She added: “We will never know.”

Nurse sharks are slow-moving bottom-dwellers that are mostly harmless to humans, according to National Geographic. The sharks, however, will bite people as a defense if they are stepped on or bothered. They are known to have strong jaws to crush hard food such as shellfish and coral.

Nurse sharks are relatively harmless to humans unless they are provoked. (Katarina Zarutskie)

The 19-year-old said it’s been a journey healing the bite wound. Zarutskie encountered multiple complications and doctors believe there may still be “pieces of the tooth” lodged in her arm.

"It was a humbling experience and I've learned a lot,” she said.

Despite the scary experience, Zarutskie told Fox News she still loves the wildlife and sharks and hopes to bring awareness to the animals. As for returning to Staniel Cay, the California native said she would go back in a heartbeat.