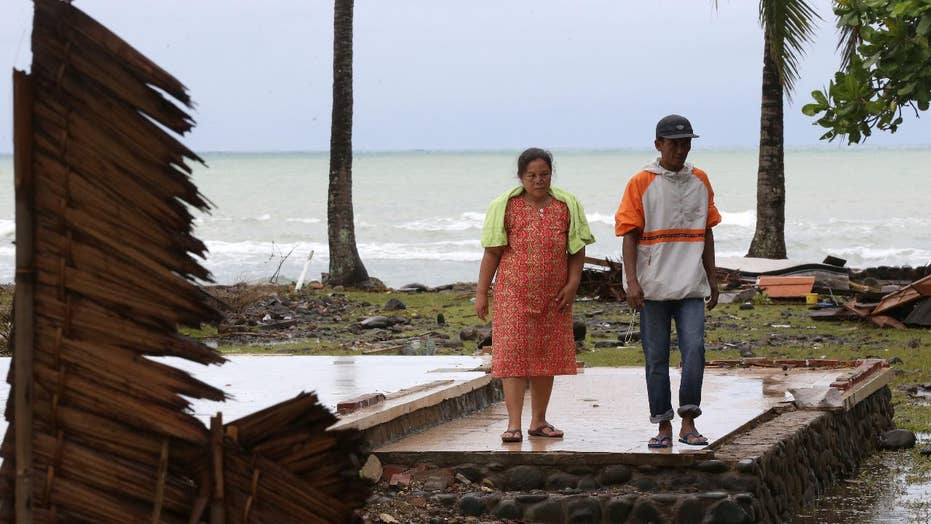 Growing fears of another eruption after the first triggered a deadly tsunami that claimed the lives of over 400 people; Greg Palkot has the latest.

JAKARTA, Indonesia – Indonesia on Thursday widened the no-go zone around an island volcano that triggered a tsunami on the weekend, killing at least 430 people in Sumatra and Java.

The volcanology agency raised the Anak Krakatau volcano's alert status to the second highest and more than doubled the exclusion zone to a 5-kilometer (3-mile) radius.

The eruption on Saturday evening caused part of the island in the Sunda Strait to collapse into the sea, apparently generating tsunami waves of more than 2 meters (6 1/2 feet). The government has warned Sunda Strait communities to stay a kilometer (less than a mile) away from the coastline because of the risk of another tsunami.

The disaster struck without warning, taking people by surprise in a country that regularly suffers landslides, earthquakes and volcanic eruptions. No earthquake shook the ground beforehand, and the waves surged inland at night on a holiday weekend while people were enjoying concerts and other beach and resort activities.

Heavy rains and high seas have hampered the search and effort. Some bodies were found at sea and at least 159 are missing.

Satellite photos aren't available because of cloud cover but radar images from a Japan Aerospace Exploration Agency satellite taken before and after the eruption show the volcano's southwestern flank has disappeared.

Dave Petley, head of research and innovation at Sheffield University who analyzed similar images from a European Space Agency satellite, said they support the theory that a landslide, most of it undersea, caused the tsunami.

"The challenge now is to interpret what might be happening on the volcano, and what might happen next," he wrote in a blog.

JASA's post-eruption image shows concentric waves radiating from the island, which experts say is caused by its ongoing eruptions.

Anak Krakatau, which means child of Krakatau, is the offspring of the infamous Krakatau volcano that affected global climate with a massive eruption in 1883.

Anak Krakatau first rose above sea level in 1929, according to Indonesia's volcanology agency, and has been increasing its land mass since then.