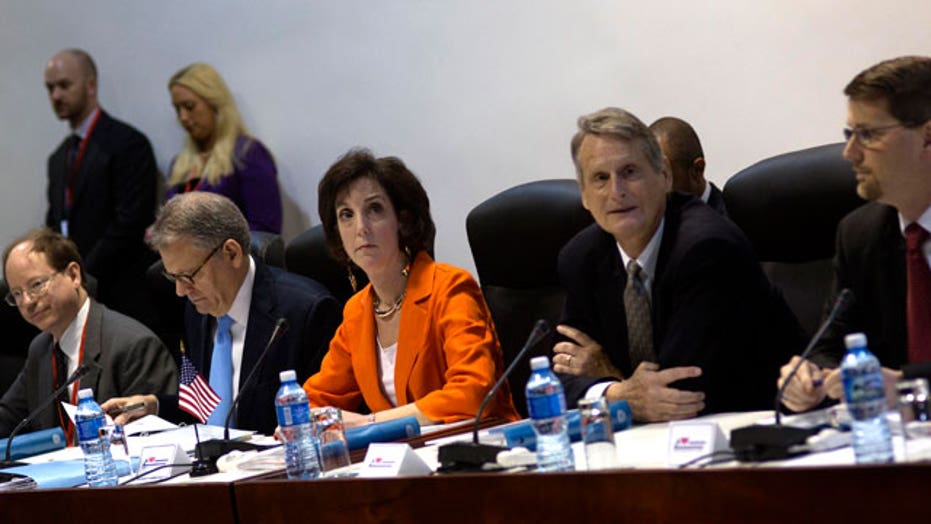 US delegation wraps up normalization talks in Cuba

HAVANA – Still at odds over human rights, the United States and Cuba closed two days of historic talks in Havana with some progress toward restoring diplomatic ties after a half-century of estrangement.

It wasn't immediately clear whether the human rights issue, which has previously blocked closer U.S.-Cuban relations, would pose a threat to the new diplomatic process.

"As a central element of our policy, we pressed the Cuban government for improved human rights conditions, including freedom of expression," said Roberta Jacobson, the top U.S. diplomat for Latin America and most senior American official to visit the island country in more than three decades. In Spanish, however, her statement said the U.S. "pressured" Cuba on the issue.

The comments by Jacobson and Vidal reflected longstanding positions of their governments. And they laid bare the pressures each side faces at home — the U.S., from Republican leaders in Congress and powerful Cuban-American groups and Cuba, from hardliners deeply concerned that rapprochement could undermine the communist system founded by Fidel Castro.

In the first face-to-face talks since last month's declaration of detente, the two countries laid out a detailed agenda for re-establishing full diplomatic relations. Further talks were planned.

Jacobson hailed a morning session as "positive and productive," focusing on the mechanics of converting interest sections into full-fledged embassies headed by ambassadors. But she also spoke of "profound differences" separating the two governments and said embassies by themselves would not mean normalized ties.

"We have to overcome more than 50 years of a relationship that was not based on confidence or trust," Jacobson told reporters.

Along with human rights, Cuba outlined other obstacles in the relationship. Vidal demanded that Cuba be taken off the U.S. list of state sponsors of terrorism. However, she praised Obama for easing the U.S. trade embargo and urging the U.S. Congress to lift it entirely.

"It was a first meeting. This is a process," Vidal said. In the next weeks, she said, the U.S. and Cuba will schedule a second round of talks, which may or may not be the time to finalize an agreement.

Issues on Thursday's agenda included ending caps on staff, limits on diplomats' movements and, in the case of the U.S. building, removing guard posts and other Cuban structures along the perimeter.

Earlier, the two countries disputed whether human rights had even been discussed at all. Jacobson said the U.S. raised it in the morning meeting; Vidal said it had not come up.

A U.S. official said the difference in Jacobson's statements was unintentional and that the English version — that the U.S "pressed the Cuban government for improved human rights conditions, including freedom of expression" — reflected the delegation's position.

The U.S. and Cuba also talked about human trafficking, environmental protection, American rules to allow greater telecommunications exports to Cuba and how to coordinate responses to oil spills or Ebola outbreaks.

The need for at least one future round of talks could set back U.S. hopes of reopening the embassies before April's Summit of the Americas, which Obama and Castro are expected to attend.

Still, after so many years of mutual suspicion, each side stressed the importance of the collegial atmosphere in Havana that included long working lunches and a dinner together.

"Look at my face," Machin said, smiling. "It reflects the spirit in which we've been talking up 'til now."