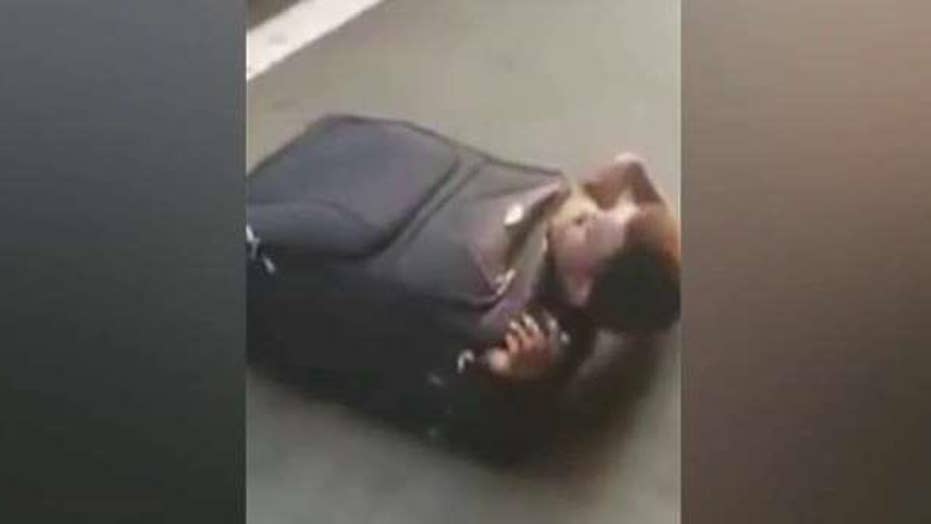 This is the moment stunned Swiss cops discovered an illegal immigrant hidden inside a suitcase – who was trying to get to Britain.

The man from Eritrea had managed to stuff himself inside the small suitcase despite being almost six feet tall.

An accomplice carried him onto a train from Milan that had stopped in Chiasso just over the border in Switzerland.

Travelers raised the alarm with the train guard after hearing noises coming from the suitcase and no one came forward to claim it.

But Swiss cops had already been alerted by Italian colleagues that two Eritreans were trying to head north into Switzerland and the train was stopped when it crossed the border.

Guards boarded the train which had left Milan 45 minutes earlier and passengers pointed out the suitcase which was dragged off the train and onto a platform at Chiasso station.

The man’s head first poked out and then a hand as he struggled to unzip the case, eventually needing help from a guard to emerge into the open.

His accomplice was found hidden in a bathroom.

A Swiss police source said: ’’We received a call from Italian colleagues that two Eritreans were attempting to get into the country and travel northwards across Europe to Britain. The information was that one man was hidden in a suitcase and another man was traveling with him. The suitcase was pointed out to us and the man found inside. He was in his 20s and we found his friend hiding in a toilet on the train.’’

Officials said neither men had any documents on them and they were both sent back to Italy.

The Houdini-style attempt is not the first time migrants have tried to sneak across borders - with some squeezing themselves into tiny spaces in car engines.