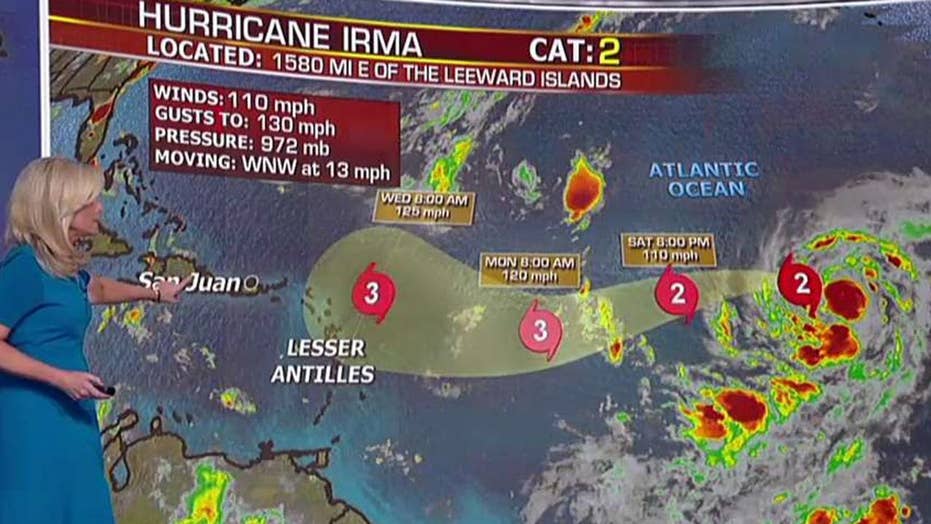 Hurricane Irma strengthened Thursday into a Category 3 storm with 115 mph sustained winds and is forecast to be an "extremely dangerous" storm for the next several days, according to the National Hurricane Center.

In its 5 p.m. ET advisory, the NHC said the storm was located over the Eastern Atlantic Ocean, about 720 miles west of the Cabo Verde Islands, moving west-northwest at 12 mph.

"Fluctuations in strength, both up and down, are possible, but Irma is expected to remain a powerful hurricane for several days," the advisory read.

Earlier in the day, the weather service said Irma is expected to be "an extremely dangerous hurricane for the next several days," and is forecast to become a category 4 storm east of the Leeward Islands in the Caribbean by next week.

Fox News Senior Meterologist Janice Dean said Thursday it's still too early to tell whether Irma will pass well north of the Lesser Antilles and Puerto Rico, or have direct impacts there by next Wednesday or Thursday.

"What we do know is that it will be an exceptionally strong hurricane, and all interest across the Lesser Antilles/Puerto Rico, Dominican Republic, Cuba and the U.S -- both Atlantic Coast and Gulf Coast -- need to monitor Irma’s path," Dean said.

Any impacts to the U.S., if any, would be a full 10 to 11 days away, according to Dean. Forecaster should have a better idea by next week where the storm is going, once Irma moves father across the Atlantic.

The storm does not pose an immediate threat to land and there are no coastal watches or warnings in effect, the hurricane center said.

HARVEY HEROISM: CITIZENS STEP UP TO HELP OTHERS DURING DEADLY STORM

Irma is the ninth named storm of the year, and comes a week after Harvey devastated Texas with record amounts of rain.

Earlier this month, forecasters said the Atlantic hurricane season would be "above-normal," with 14 to 19 named storms ahead of the peak season.

An average Atlantic hurricane season, which runs from June 1 to November 30, produces 12 named storms, of which six become hurricanes, including three major hurricanes, according to the NOAA.