Hungary Foreign Minister: Having another kid must not be an economic decision anymore

What does a pro-family country look like? Foreign Minister of Hungary Peter Szijjarto weighs in.

NEW YORK -- Hungary is backing President Trump in his crackdown on migrants claiming asylum at the southern border -- as the government touts its own success in drastically reducing the influx of migrants into the country.

The Trump administration on Monday announced a sweeping new policy tightening restrictions for asylum-seekers that would require most migrants entering through America’s southern border to first seek in one of the countries through which they traversed, whether Mexico or somewhere else in Central America.

The policy has come under considerable criticism at home from Democrats, with House Speaker Nancy Pelosi, D-Calif., calling the policy “cruel” and a “clear abdication of American humanitarianism.”

But Hungarian Foreign Minister Peter Szijjarto told Fox News in an interview this week that his country, which famously cracked down on illegal immigration and asylum seekers during the 2015 migration crisis, say his country understands what Trump is doing.

“We absolutely understand this approach because you raise the question ‘How should anyone be taken into consideration as a refugee if he or she already crossed a safe country?’” he said. “If you are a refugee that means you would like to reach the first safe place in order to avoid the negative impact of the crisis that makes you escape.”

Hungary was on the frontlines of the 2015 European migration crisis as more than 400,000 migrants walked through the streets of Budapest and set up camps in train stations. As other governments opened their borders in response to the migration crisis, Hungary did the opposite and closed its borders, setting up two fences and militarizing the border.

The result, officials say, is that there has been next to zero illegal immigration into Hungary.

“We raised the question, ‘What should be the legal or humanitarian reason to allow anyone to violate a border between two safe and peaceful countries?’" he said. "And the answer is that there is none."

The hardline approach has been popular at home. Prime Minister Viktor Orban’s Fidesz Party made immigration a focus of its 2018 general election campaign and was rewarded with a supermajority, and polls suggest his party's support is around 50 percent in a multiparty system.

Felipe Gonzalez Morales, the U.N. special rapporteur on migrant rights, this week finished a visit to Hungary and accused the government of scapegoating migrants and engaging in “xenophobic discourse.” He urged the government to soften its stance, arguing that the situation on the ground had changed since 2015.

"The current situation is a completely different one than the one that existed four years ago," he told reporters. "Security concerns, that are legitimate but which cannot override human rights, should be adapted to reality." 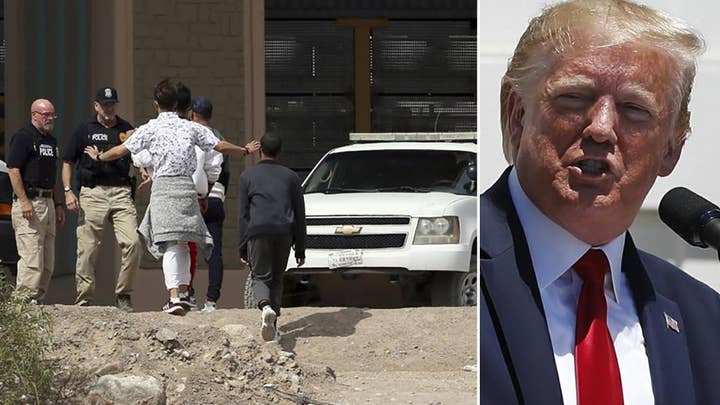 Hungary’s government has dismissed that criticism, and Szijjarto told Fox News that there are still daily attempts by migrants to get into the country illegally. He also pointed to the "Hungary Helps Project', which pumps millions of euros in aid into Christian communities in the Middle East to tackle the root causes of the European migration crisis.

"We have rebuilt houses of more than 1,000 Christian families in Iraq, we are reconstructing 33 Christian churches in Lebanon, covering medical expenses this year for three Christian hospitals in Syria, we are rebuilding schools and orphanages to make it possible for these communities to stay, because if they leave then it fulfills the goals of the terrorist organizations who would like to eliminate these communities," he said.

Szijjarto also challenged the idea that a regular influx of migrants is needed for a healthy economy, pointing to positive economic news showing Hungary’s economy is in good shape, including rising salaries and near full employment. The European Commission recently forecasted that Hungary’s GDP would grow by 4.4 percent in 2019.

“We do not need migration to maintain it, we have totally shifted from a manufacturing-based economy to an R&D-based economy,” he said.

Hungary’s government's confidence comes not only from its recent election wins at home, but also the changing face of international relations. In 2015, it was one of only a few countries taking a tough stance on migration. But in 2019, in addition to alliances with Poland, Slovakia, Austria and the Czech Republic, it can also point to countries such as Italy and particularly the U.S, which have adopted right-wing policies on questions of migration and national sovereignty.

Orban visited the White House in May and Szijjarto said that Hungary's government has enjoyed a much closer relationship with the U.S. since 2017, one based on "mutual respect."

“[Trump's] approach in saying ‘America First’ is very refreshing because that makes it possible for us to say 'Hungary First,'” Szijjarto said. "His being in office shows that patriotic policies do have a future and we really count on good cooperation in the future with him."