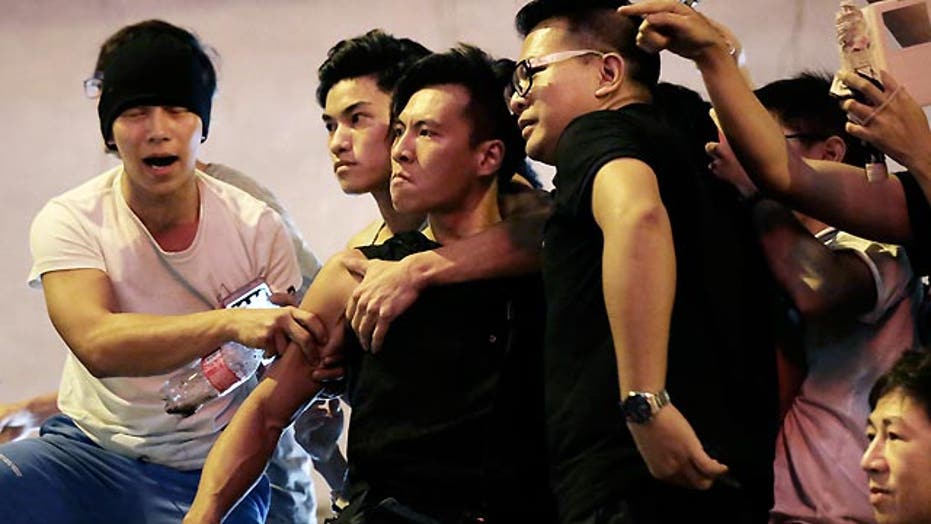 On Friday protesters were attacked by counter-protestors belonging to Hong Kong’s criminal triads. Protest leaders accused the government of inciting the violence by colluding with the triads to try and break-up their massive street protest which has forced government offices and schools to close for more than a week.

Police arrested 19 people during the violent confrontations, including eight with “triad backgrounds,” the BBC reported. Injuries were reported to 12 protestors and six police officers.

The triads have long controlled drug-running, prostitution and extortion networks but the BBC said in its report that in recent years the underworld groups have branched into more legitimate rackets like property development and finance.

Leaders of the Hong Kong Federal of Students said the triad-provoked violence had led them to shelve plans to sit down with the government and negotiate an end to the protests.

“The government allowed the mafia to attack peaceful Occupy participants. It has cut off the path to a dialogue and should be responsible for the consequences,” the group said in a statement, according to the BBC.

As the protests continue, the protestors and the government are facing a potential showdown that could come as early as Monday.

Hong Kong’s current chief executive Leung Chun-ying warned in a television address after the violent confrontations that police will take “all actions necessary” to ensure government offices and schools reopen by Monday.

The protestors are demanding that China steer clear of free elections in 2017 to replace Leung.

The confrontations took place mostly in gritty, blue-collar Mong Kok district. Officials vehemently denied accusations they might have coordinated with the gangs to clear the streets.

The standoff in Mong Kok, across Victoria Harbor from the activists' main protest encampment, continued Saturday after a tense night when hundreds of supporters of the protesters gathered to protect them.

Kwok said those arrested were facing charges of unlawful assembly, fighting in public and assault. On Saturday, the situation remained tense as the anti-protest groups regrouped in Mong Kok, at times chanting "Pack Up!" at the protesters.

The opponents of the demonstrations are using blue ribbons to signal their support for the mainland Chinese government, while the protesters are wearing yellow ribbons. Some of those belonging to the "blue ribbon" side staged a rally in Kowloon's waterfront Tsim Sha Tsui.

"Love Hong Kong" and "Support Police" they chanted, holding up flags and heart-shaped signs with the slogan, "Alliance in support of our police force."