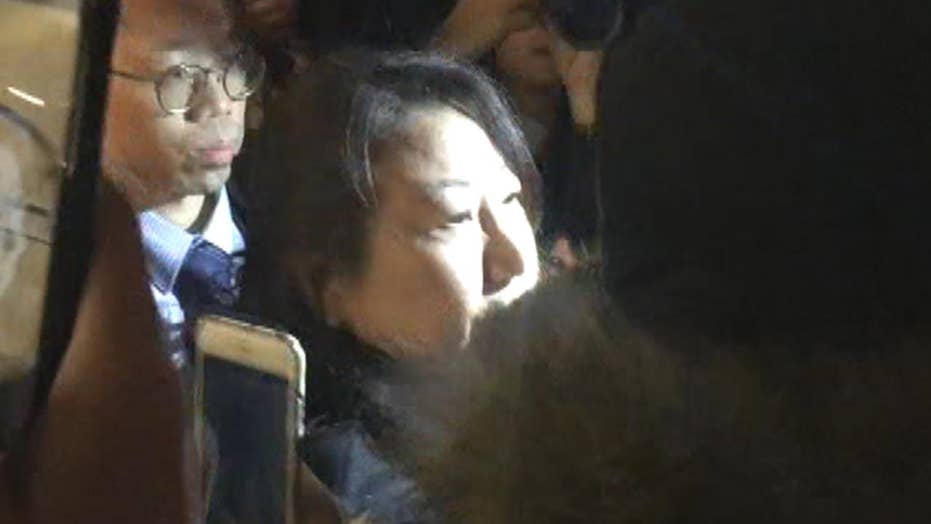 A Hong Kong official was injured in an alleged targeted attack in London on Thursday by pro-democracy protesters who yelled “murderer” and “shame on you,” police said.

Justice Secretary Teresa Cheng, a legal adviser to Hong Kong’s Carrie Lam, was surrounded by dozens of protesters and falling to the ground, video shows. It wasn’t clear if she was pushed or fell in the confrontation.

Hong Kong Justice Secretary Teresa Cheng gets up after falling when protesters surrounded her in London, on Nov. 14, 2019, in this still image from video obtained via social media. Chloe Leung via REUTERS

"A woman was taken to hospital by London Ambulance Service suffering an injury to her arm," London police said in a statement, according to The Guardian. "Enquiries are ongoing to establish the full circumstances. There has been no arrest at this stage."

Cheng was taken to the hospital for treatment and later released.

Hong Kong's justice secretary Teresa Cheng speaks to the media at the Legislative Council in Hong Kong on January 24, 2018, after answering lawmakers' questions about illegal structures found at some of the properties she owns. / AFP PHOTO / ISAAC LAWRENCE (Photo credit should read ISAAC LAWRENCE/AFP via Getty Images)

The Chinese embassy in the U.K. denounced the attack, saying that the “violent and lawless perpetrators” committed a “flagrant assault” on a government official.

“It has once again proved that their real intention is to destabilize Hong Kong, paralyze the SAR government and undermine ‘one country, two systems’,” a statement said.

It added: “Now, they are taking such violence abroad and into the UK. Their action deserves to be condemned not only by the entire Chinese people including the Hong Kong compatriots but also by the British public and the international community unanimously.”

Cheng, an unpopular figure in Hong Kong, played a key role in pushing an extradition bill that sparked the protests in the former British colony that have paralyzed the city. She was scheduled to speak at the Chartered Institute of Arbitrators in Bloomsbury before the attack, The Guardian reported.

A demonstrator who wished to be anonymous told Sky News the incident was an overreaction by the Hong Kong government.

"It was small scale and people were chasing after her and yelling at her, and amid chaos, she did trip over," they told the outlet.

"Now, the Hong Kong government is calling the protesters "violent mob" and "radicals", reporting the case to Met Police, making it pretty big."

The attack against Cheng comes in the heels of the death last week of 22-year-old student Alex Chow Tsz-Lok, reigniting protests in Hong Kong. He was killed after falling from the ledge of a car park while attempting to flee from a tear-gassed area.

Meanwhile, the city remains practically paralyzed as protesters barricaded themselves at the Chinese University of Hong Kong for several days. On Friday, many of those demonstrators began to leave, though it was unclear why or where they were going.