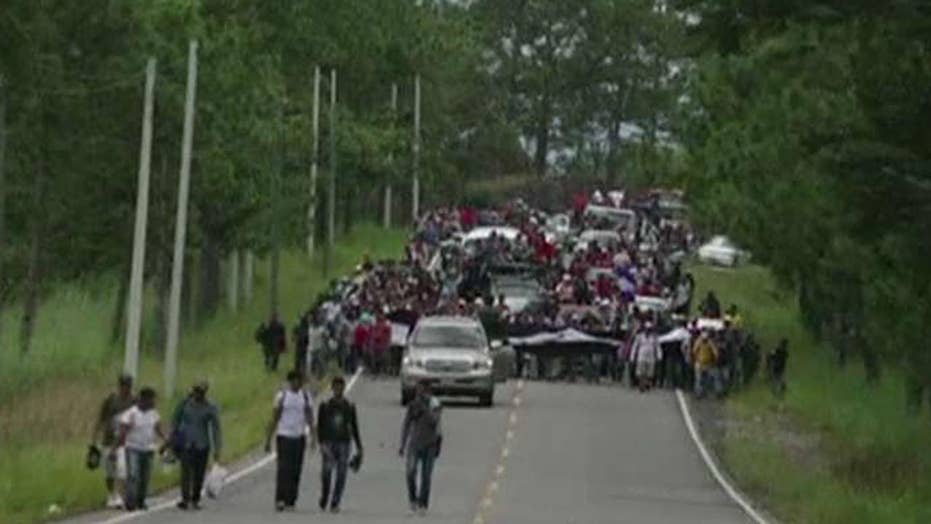 As caravans of migrants head to the U.S., the president issues a warning to Honduras, Guatemala and El Salvador.

Thousands of Honduran migrants heading toward the U.S.-Mexico border reportedly are on the move again Wednesday -- despite warnings to turn back from their own country and President Trump.

The caravan of around 2,000 people was walking through a light rain near Chiquimula, Guatemala on Wednesday afternoon after covering about 30 miles the day before, the Associated Press reported.

Former Honduran legislator Bartolo Fuentes, who is said to have organized the march, was detained by Guatemalan authorities Tuesday after failing to register with migration officials upon entering the country.

The group's numbers have snowballed since about 160 migrants departed Friday from the Honduran city of San Pedro Sula, with many people joining spontaneously while carrying just a few belongings. The migrants, who are fleeing widespread poverty and violence, hope traveling en masse affords them protection from robbery, assault and other dangers that plague many on the journey north.

News of the caravan has prompted Trump to double down on threats to cut off aid to Honduras if the mass migration continues.

“We have today informed the countries of Honduras, Guatemala and El Salvador that if they allow their citizens, or others, to journey through their borders and up to the United States, with the intention of entering our country illegally, all payments made to them will STOP (END)!” the president said in a tweet late Tuesday.

Trump added anyone entering the country “illegally will be arrested and detained” before being deported.

The government of Honduras has called the group of travelers an “irregular mobilization” that is "obviously political and seeks to upset governability, stability and peace in Honduras and the United States."

The caravan, which departed from San Pedro Sula in Honduras, is the second such grouping this year to spur warnings to Latin American leaders by Trump. In April, he threatened to withdraw aid from countries -- including Honduras -- that allowed a previous caravan of migrants to pass through.

Mexico has recently warned that only those who meet entry requirements will be allowed into the country. Hondurans need visas to visit Mexico in most cases.

Still, it remains unclear if Mexico and other governments in the region have the political will to physically halt the determined Honduran migrants.

In a joint statement Wednesday, Mexico's Foreign Relations and Interior Departments said that anyone in the caravan with travel documents and a proper visa will be allowed to enter, and anyone who wants to apply for refugee status can do so.

But the statement said all cases must be processed individually, suggesting that authorities have no intention of letting the migrants simply cross the border en masse without going through standard immigration procedures.

It warned that anyone who enters Mexico in an "irregular manner" faces detention and deportation.

Since 2014, the United States has committed $2.6 billion in aid for Honduras, Guatemala and El Salvador, according to the Associated Press. For 2019, Washington has earmarked $65.7 million in aid to Honduras for security, democracy building, human rights and economic and social development programs.