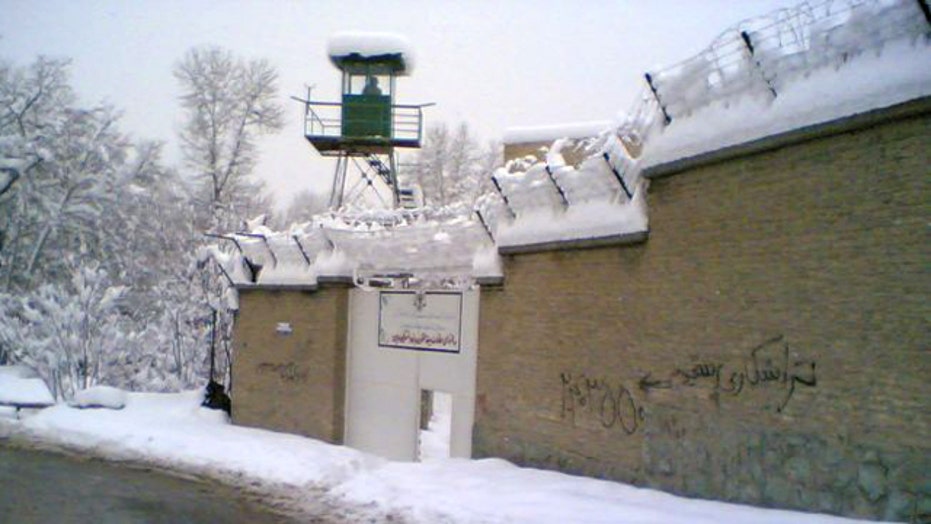 It is known as Evin University, but it's no school -- it is one of the world's most brutal and infamous prisons. And barring intervention by Iran's religious leaders, it could be the home of American citizen and Christian Pastor Saeed Abedini for the next eight years.

Beatings, torture, mock executions and brutal interrogations are the norm at Evin prison, where for four decades the anguished cries of prisoners have been swallowed up by the drab walls of the low-slung lockup in northwestern Tehran. Standing at the foot of the Alborz Mountains, it is home to an estimated 15,000 inmates, including killers, thieves and rapists. But the prison has also held ayatollahs, journalists, intellectuals and dissidents over the years, and few if any who have survived time in Evin could be surprised by claims of torture and abuse made by Abedini's supporters.

“To many Iranians, the concept of Evin prison is synonymous with political repression and torture,” Gissou Nia, executive director of the Iran Human Rights Documentation Center, told FoxNews.com. “Today, anyone who is perceived to be a threat to the Iranian regime, including human rights defenders … is kept within the confines of Evin and other notorious prisons in Iran."

Evin House of Detention was built during the reign of Mohammad Reza Pahlavi -- known to Americans as the Shah of Iran. Before he was ousted from power in the 1979 revolution, the prison housed some of the very radicals and sympathizers who would one day rule the Islamic Republic. During the 10-year reign of Ayatollah Ruhollah Khomeini, thousands of political prisoners were systematically murdered at Evin, according to Nia. After Khomeini's death in 1989, Evin continued to serve as a holding pen for some of Iran’s most prominent intellectuals, activists and journalists, earning it the nickname "Evin University."

“Much of the opposition was sent, without pretense, to Evin,” Nia said.

What they found was a house of horrors little changed over the years.

Marina Nemat was just 16 in 1981 when she was arrested and thrown into Evin during the mass arrests of students. She recalls the experience vividly.

“When you clear the gates, you are immediately blindfolded and brought underground,” Nemat told FoxNews.com. “They take you for interrogation. They take you to a hallway and sit you down. You are there for a long time. If you move or say anything you are beaten. You must sit perfectly still, while still blindfolded, and you can wait for hours, days or even weeks.”

Broken captives are then taken to an interrogation room, where the goal of inquisitors has little to do with getting at the truth.

“They are not looking for information," said Nemat, now a instructor at University of Toronto and author of "Prisoner of Tehran," a 2007 book detailing her ordeal and a second memoir entitled, "After Tehran". "What they want is for you to admit that you affected the national security of Iran.”

The bare feet of troublesome prisoners are lashed with cable to loosen their tongues. They're made to walk on swollen feet before the lashings resume, said Nemat, who added that many prisoners have died during this phase of interrogation.

Nemat survived and then endured six months of solitary confinement in Evin's 209 section, where cells typically had a toilet, a sink and no bed.

“The cells were just large enough to lie down," she said. "When you lay down at night if you stretched out your arms, you could touch the walls. Every day felt like 3,000 years.”

But the most harrowing experience Nemat went through at Evin came when jailers blindfolded her and led her out of a cell and down a corridor. When the blindfold was removed, she was facing a firing squad. As she waited for the cluster of rifle reports that would end her life, a guard pulled her away.

“He brought me back to my cell,” she said. “He told me that I was sentenced to death in court. I told him that I never had a trial and he said, ‘Yes you had a trial, you just weren’t there.'”

Like many other prisoners issued a death sentence, Nemat’s was reduced to life in prison. She spent another 15 months in another section of Evin, where she shared with as many as sixty other inmates in a public cell originally designed for just five or six people.

“Food was bare minimum and we were always hungry," she said. “The prison had closed-circuit television and they showed religious propaganda all day and they also showed the recorded confessions of the leaders of opposition groups who had broken under torture. We had only religious books about the Koran to read. Visitations were extremely limited and if we showed any sign of distress during visitation to our families, we would be tortured.”

Nemat spent three years at Evin before getting a new trial, where her sentence was reduced to time served. Although she and countless other inmates at Evin never were told what their supposed crimes were, the charge of compromising national security is the typical catch-all. It is punishable by death.

Journalist and human rights advocate Roxana Saberi went to Iran back in 2003 where she reported for nearly six years on Iranian society and also started writing a book. She was arrested and sent to Evin in January 2009 as she was getting ready to leave the country.

"My captors said it wasn't possible that I could be interviewing such a large number of people only to write a book, so they claimed it was a cover for espionage for the CIA," Saberi, who now lives in New York, told FoxNews.com. "I denied the accusation, but cut off from the world, without access to an attorney, and threatened by my captors during terrifying interrogations, I gave in to their pressures and falsely confessed I was a spy.

"I later recanted the false confession but was sentenced in a sham trial to eight years in prison," added Saberi, who wrote a book titled "Between Two Worlds: My Life and Captivity in Iran." "I was very lucky to be released after 100 days. I believe that media coverage, along with people's efforts such as signing petitions, writing letters to Iranian officials, and speaking out for me helped pressure the Iranian authorities to release me after my appellate trial."

Such media coverage also may have helped win freedom for Youcef Nadarkhani, an Iranian Christian pastor who was recently released after serving three years in Evin for compromising national security by converting from Islam to Christianity. Nadarkhani, 35, was freed after Fox News and other media outlets drew attention to his plight, but his attorney, Mohammed Ali Dadkhah, remains imprisoned in Evin, where his health is rapidly deteriorating, according to his family. He has been jailed for advocating for Nadarkhani and others, which in the eyes of a twisted and oppressive justice system, also falls under the familiar charge of compromising national security.

Ali Golchin, 31, was arrested in 2010 after officers from the Iranian National Police entered his home and confiscated several Bibles as well as his ID card and computer. He spent nearly three months locked up inside Evin prison.

“I was accused of evangelizing, and [creating] propaganda against Islamic Republic,” Golchin told FoxNews.com. “I didn’t have any life at Evin. I was just in solitary confinement."

In harrowing interrogation sessions that often stretched for as long as eight hours, Golchin was threatened with death and told his family would be punished for his supposed crimes. Released after posting a bail of 200 million tomans (approximately $100,000), Golchin was later summoned back to court and sentenced to another year in prison. With the horror of Evin fresh in his mind, Golchin fled his homeland. Living in Turkey, Golchin fears for family members still in Iran.

Abbas Sadeghi was held for 40 days at Evin when he was accused in December 2010 of conspiring to overthrow the regime and for his involvement with the Elam ministry, an international Christian network that seeks to spread the Bible's message to Iranians and is known by the slogan "The love of Christ for Iran and beyond."

“My life in prison was limited just to interrogations," Sadeghi said. "They were taking me blindfolded to the interrogation room every morning and mocking my belief. They were saying to me that I was foolish to have converted to Christianity. They said they even have arrested [Jesus] Christ and that he was in the other cell.”

Sadeghi was granted bail, then later sentenced to six years prison. Like Golchin, he fled to Turkey rather than return to Evin prison.

"I had no choice but to flee Iran," he said.