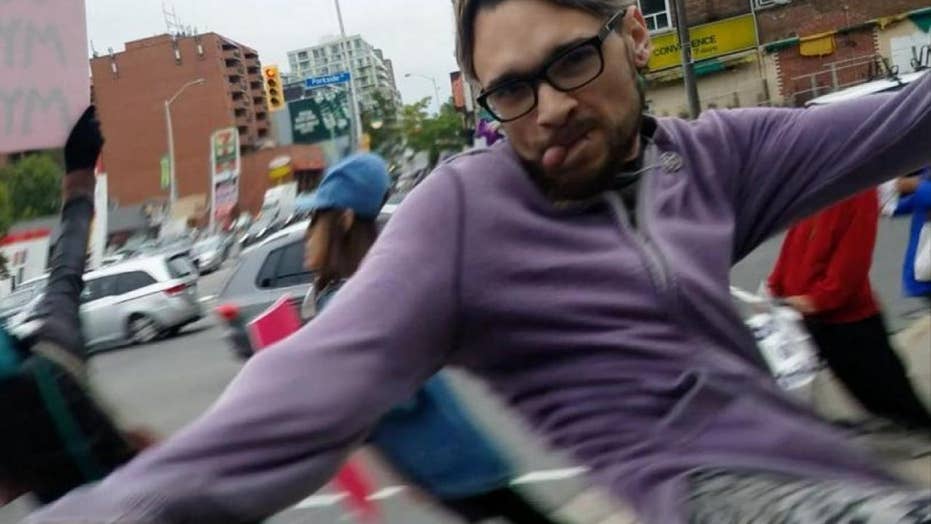 Toronto police arrested a man caught on camera over the weekend violently kicking a female pro-life activist – and he later admitted shoving a woman into a pole during a similar demonstration in August, cops said.

Authorities announced that Jordan Hunt, 26, surrendered to police Saturday and is facing eight counts of assault and seven counts of mischief under $5,000.

In a press release revealing details of the charges, Toronto police said Hunt is facing an additional assault charge stemming from a previously undisclosed Aug. 2 incident in which he allegedly approached a “group of people protesting against abortion,” tried to grab one of their signs and then shoved a female pro-life demonstrator.

Marie-Claire Bissonnette, the 27-year-old woman involved in this past weekend’s incident, is the youth coordinator with Campaign Life Coalition and has since spoken out about the ordeal. She said she would press charges if Hunt was arrested.

In the video – which went viral – Hunt is seen approaching a group of pro-life activists and engaging them in a discussion about abortion before suddenly kicking an activist and ripping a Campaign Life ribbon off her jacket.

“He kicked me in the shoulder, my phone went flying,” Bissonnette told the Toronto Sun. “I start shouting for someone to call police and before he runs away, he goes up to me and I had a ribbon on my jacket…he tore it off my chest.”

Bissonnette said the kick left her with minor pain and those who saw the incident “were in shock.”

“When he began to pose and you can see in the video that he positions himself for this, I guess it didn’t register because it was very sudden,” Bissonnette said. “You would expect someone to start yelling in a loud voice or be very aggressive before they would go and physically assault someone.”

Hunt, a Toronto hairstylist, was immediately fired from his job after his identity was revealed.