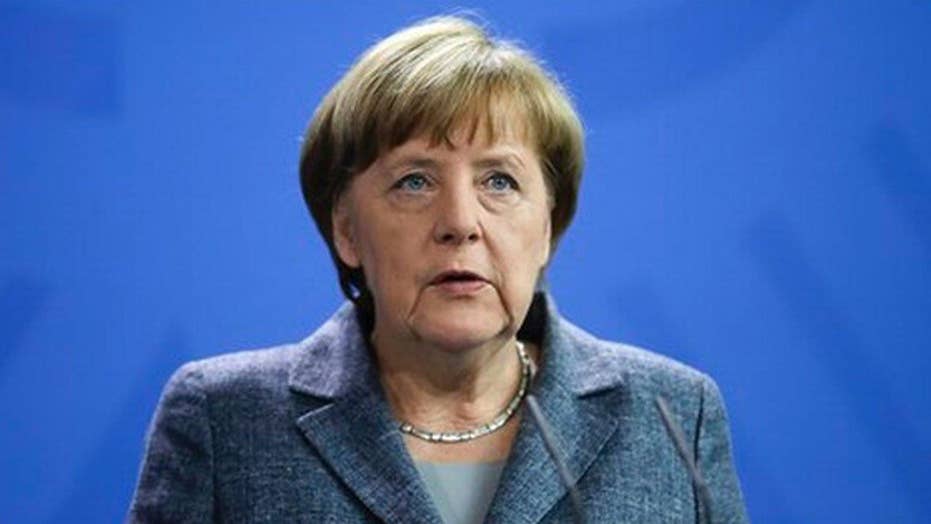 Dr. Gorka: Angela Merkel will be feeling the heat

On 'Your World,' insight into the psyche of Germany amid a shopping center shooting in Munich

BERLIN – Angela Merkel, who has steered Germany through several global crises as its first female leader, said Sunday she will seek a fourth term as chancellor in elections next year, when she could find herself up against the anti-immigrant populist tide that has swept both Europe and the U.S.

"I literally thought about this decision endlessly ... but I am ready to run for office again," Merkel told reporters after meeting with high-ranking members of her center-right party. "I want to serve Germany."

Repeatedly named "The World's Most Powerful Woman" by Forbes magazine, the 62-year-old Merkel has been cast by some as the last powerful defender of liberal values in the West following Donald Trump's election as the next U.S. president.

The nationalist Alterative for Germany party, or AfD, could prove to be one of the biggest stumbling blocks to her re-election. The populist party, now represented in 10 state parliaments, has aggressively campaigned against Merkel's decision to welcome an estimated 890,000 migrants into Germany last year.

Trump's election and Britain's vote last June to withdraw from the European Union have reflected, in part, growing populist and anti-immigrant sentiment among voters. Elections next year could also see a far-right politician become president of France.

Merkel said she expects strong challenges from the left and right fringes as Germany has become more polarized.

"This election will be difficult — like no other election since the reunification" of West and East Germany in 1990, she said.

A date has not yet been set for the election, but it will take place sometime between Aug. 23 and Oct. 22.

Clearly the dominant leader in Europe, Merkel urged caution against outsized expectations about what she might yet achieve.

"No person ... not even with the biggest experience, can turn things in Germany, Europe and in the world more or less to the good, and especially not the chancellor of Germany," she said.

Merkel will also seek re-election as chairwoman of the Christian Democratic Union party at its convention next month but faces no serious opposition.

A physicist by training, Merkel became chancellor in 2005. She is the first leader of a reunited Germany to have grown up under communism in the former East Germany.

If she wins next year and serves the entire four-year term, Merkel will match her one-time mentor Helmut Kohl's postwar record of 16 years in office.

"In these difficult times, Merkel is a pillar of stability," Guellner told The Associated Press. "People have the feeling she represents German interests well abroad."

While she has never been described as a visionary or earned much praise for stirring speeches, Merkel — sometimes referred to as "Mutti," or "Mom," in Germany — has won respect for being tough, shrewd and dogged in tackling problems.

She has dealt with several international crises, including the Eurozone debt crisis in 2008-09 for which she brokered compromises among fractious EU leaders.

She has been a strong advocate of efforts to combat climate change, and in 2011 abruptly accelerated the shutdown of Germany's nuclear power plants following the meltdown at Japan's Fukushima plant.

Unresolved diplomatic challenges include Europe's tense relationship with Russia, the future of Ukraine, autocratic developments in Turkey, the war in Syria and negotiations over Britain's exit from the EU.

In elections in the eastern state of Mecklenburg-Western Pomerania earlier this year, Merkel's party came in third behind the AfD. According to recent polls, the AfD would win around 10 percent of the vote if general elections were held now.

Merkel, the daughter of a Protestant pastor, entered politics in her mid-30s after working as a physicist behind the Iron Curtain. She served as minister for women and families in Kohl's first post-reunification Cabinet in the 1990s and then also as an environment minister.

In the beginning of her political career, she was often underestimated by her mostly male, Catholic, West German party companions, who sometimes referred to her condescendingly as "Kohl's girl." In the end, she eliminated her rivals with tactical skill and sheer luck to make it all the way to the top in 2005.

While Merkel often appears reserved and even stiff in public, she has tried in past campaigns to show a more human side. She opened up about her favorite pastimes outside politics, which include baking plum cake for her husband, the publicity-shy chemistry professor Joachim Sauer, and spending weekends at a cabin outside Berlin.

"I can see how Merkel has this personal ambition to show the people that she, who used to be such an outsider when she first entered politics as an East German and a woman, made it all the way," said Gero Neugebauer, a political scientist at Berlin's Free University.