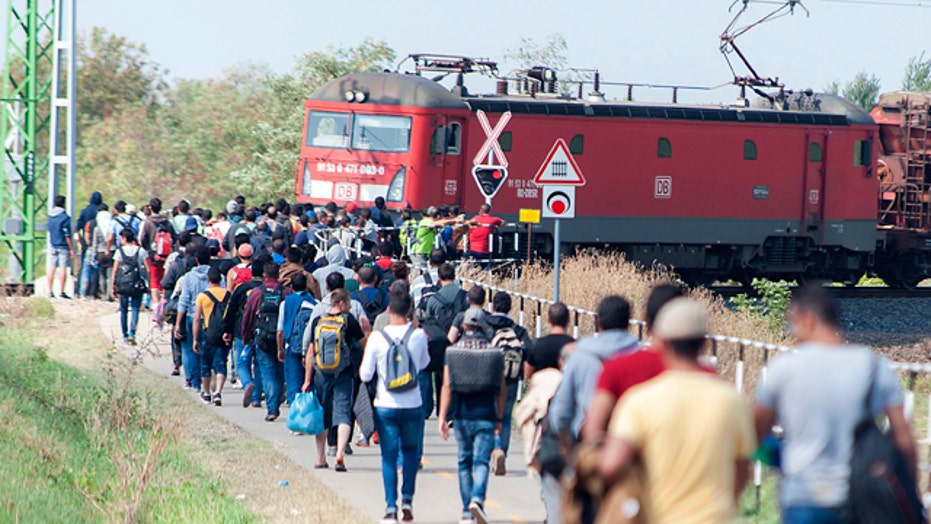 How should US respond to Europe's refugee crisis?

Germany's vice chancellor said Monday that the country expected to take in 1 million refugees from the Middle East, Africa, and Asia this year, a day after Berlin introduced document checks along its border with Austria and temporarily halted trains between the two countries in a bid to limit the influx.

Sigmar Gabriel provided the revised estimate in a letter to his colleagues in Germany's Social Democratic Party. The Germany government had previously estimated that 800,000 refugees would enter the country this year, itself a fourfold increase over 2014's intake. In the letter, Gabriel once again called for other European countries to do more to help refugees, saying there had to be a "common European effort" to tackling the crisis.

The new searches checks were leading to traffic jams on highways at the border Monday morning. Authorities in Bavaria said there was a roughly 2-mile backup Monday on the A8 highway at Bad Reichenhall, near the Austrian city of Salzburg, news agency dpa reported. Regional broadcaster Bayerischer Rundfunk reported a nearly 4-mile jam on the A3 highway near Passau.

A spokeswoman for Germany's national railway told the Associated Press early Monday that it has resumed train services from Austria after authorities ordered a temporary halt on Sunday evening. However, the main Salzburg-Munich line initially remained closed between the Austrian city of Salzburg and the German border town of Freilassing because there were people on the track.

In all, service was suspended for approximately 12 hours.

Meanwhile, Austrian Chancellor Werner Faymann said Monday that he would deploy the country's military to the border with Hungary to help police dealing with the refugee surge if needed. Faymann said the army would currently focus on providing humanitarian help inside Austria, but added that soldiers will be deployed to help at the borders if required.

Germany has been the final destination for many refugees, who have either traveled overland via Turkey and the Balkans or braved the dangerous Mediterranean Sea crossing to Italy or Greece. The German government has estimated it would receive up to 800,000 refugees this year and has indicated it could take hundreds of thousands more per year indefinitely.

Germany and Austria agreed over a week ago to let in thousands of refugees who had gathered in Hungary, saying it was a one-time measure to ease an emergency. Still, the influx has continued.

However, Sunday's actions appear to show that even Germany is at risk of being overwhelmed by the sheer numbers trying to enter the country. On Saturday, 13,000 people crossed into Germany from Austria, and another 3,000 crossed the border Sunday morning before the border checks were implemented.

In introducing the measures Sunday, German Interior Minister Thomas de Maiziere said: "The aim of these measures is to limit the current inflows to Germany and to return to orderly procedures when people enter the country ... The great willingness to help that Germany has shown in recent weeks - by full-time employees and especially by the many thousands of volunteers - must not be overstrained."

Overnight Sunday, Sky News reported that German border police seized 18 cars from eight different countries at the border crossing near the Bavarian town of Passau. Thirty suspected people traffickers were detained and 60 refugees taken to a nearby holding center.

Six of the vehicles were registered in Germany, five from Sweden, one from the Netherlands, one from Hungary, two from France, one from Poland, one from Austria and one from Bulgaria.

In Munich, the main point of entry into Germany from Austria, city officials said their capacity to house the newcomers arriving from Hungary via Austria is being stretched to the limit. Federal police spokesman Simon Hegewald said more than 700 people fleeing their homelands have arrived at the city's main station on Sunday morning after a total of 12,200 refugees came to the city on Sunday.

In response to Germany's decision, Czech Prime Minister Bohuslav Sobotka ordered more police to the Austrian-Czech border ""to ensure that laws and rules inside the Schengen zone are not violated."

The "Schengen zone" refers to the Schengen Agreement, which calls for the abolition of internal borders and the introduction of a single external E.U. border. The agreement also stipulates that those wishing to seek asylum should do so in the country where they first enter the E.U., contrary to the wishes of the refugees heading to Germany and Austria via other E.U. nations.

However, the treaty also provides for its suspension for reasons of "public policy or national security".

European Union interior ministers were due to meet in Brussels Monday for emergency talks in an effort to narrow a yawning divide over how to share responsibility for thousands of refugees arriving daily and ease the burden on frontline states. E.U. president Jean-Claude Juncker called last week for members of the 28-nation bloc to resettle 160,000 refugees over the next two years. The ministers were expected confirm the distribution of an initial 40,000 refugees, but this scheme was conceived in May and some nations still do not plan to take in their share before year's end.