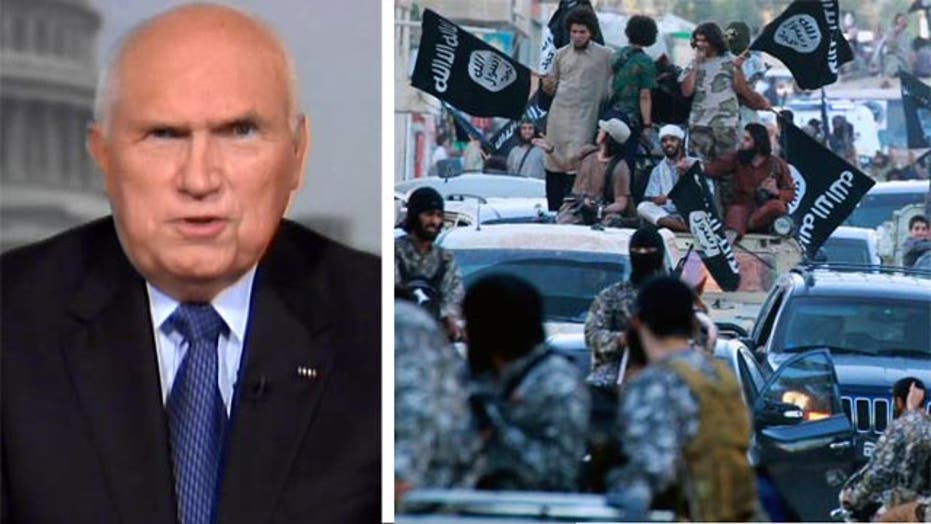 Major General Robert Scales on US strategy against terrorists in Syria

The U.S. starting surveillance flights over Syria is the “opening round” in the military laying out a plan to strike the terrorist group Islamic State -- also known as ISIS, according to a former Army general.

"There is this huge intelligence black hole over ISIS. When ISIS swept over eastern Syria and Northern Iraq they literally swept away any means to look down and had a terrible effect on us to see the battlefield,” said Scales. “We need to re-establish that intelligence network of human beings and signals intelligence such that we know what’s going on.”

He sees this as the “first stage in a direct action campaign” against terrorists “because Syria is the center of gravity of ISIS, not Iraq. Until you assail them at their core, only then will we have success against ISIS.”

This possible military campaign, Scales points out, should not be compared to U.S. strategy used during the 2003 invasion of Iraq.

“Instead of ‘shock and awe,’ this campaign is going to be a very gradual, stepped affair with decision points by the president and the JCS [Joint Chiefs of Staff] at each of those steps.”

Critics say if the U.S. does take action in Syria, American officials should not cooperate with Syrian President Bashar Assad. This comes only a year after the U.S. threatened airstrikes against the regime itself over its chemical weapons use on civilians.

“A year ago there was no end state, it was essentially a revenge attack for the use of chemical weapons and an attempt perhaps to unhinge Assad so the Syrian people would depose him,” said Scales. “This is different. This isn’t about Assad and it’s not even about the Iraqi government, it’s about the United States.”

He added, “these strikes against ISIS aren’t going to be conducted to prop up the Syrian dictator, it’s to remove the ability of ISIS to develop a safe haven … and turn that into a terrorist campaign against Western Europe and the United States.”