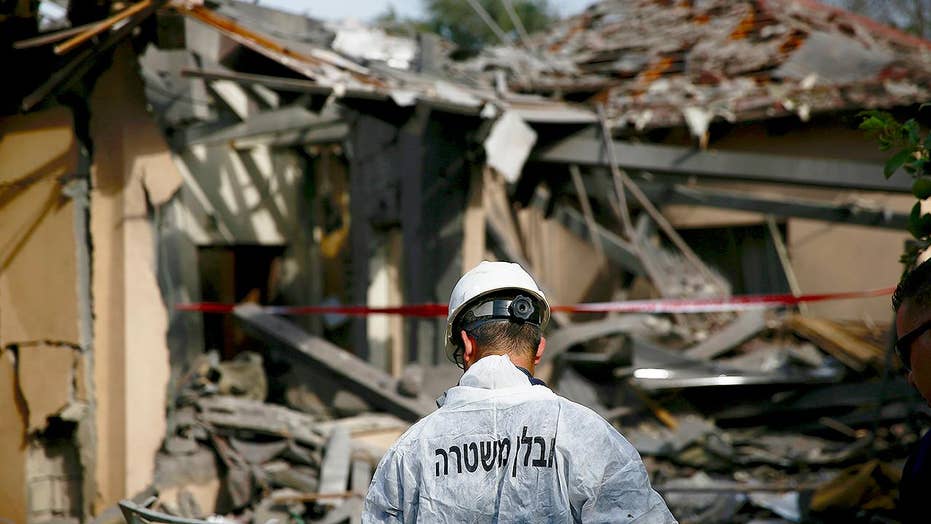 Gaza militants launched at least 10 rockets Monday evening in their latest barrage of fire after Israeli forces struck key targets including the offices of Hamas leader Ismail Haniyeh. The barrage of rockets from Gaza hit Israeli towns around the border, including a house in the town of Sderot. No one was injured.

Sirens could be heard wailing in southern Israel amid the latest rocket fire.

Israel's strikes had come in response to a rocket attack from the Palestinian territory earlier Monday. It also came amid a bolster in Israeli troops and rocket-defense systems ahead of what is expected to be a new round of battle with the Islamic militant group.

"Israel is responding forcefully to this wanton aggression," he said. "We will do whatever we must do to defend our people and defend our state."

Ahead of the Israeli airstrikes, Hamas' leadership went into hiding. In both blasts, Israel fired warning shots to evacuate the buildings.

"This morning, a rocket was launched from the Gaza Strip at central Israel," the Israel Defense Forces (IDF) said in a statement. "In response, IDF fighter jets recently targeted the office of Hamas Chairman, Ismail Haniyeh in the northern Gaza Strip neighborhood of Rimal. The building which was struck hosts many military meetings and was previously struck during Operation 'Pillar of Defense' in 2012," the IDF said.

"This prominent Hamas building is used for terror purposes by Hamas. It was targeted alongside IDF strikes conducted throughout the Gaza Strip. Hamas is responsible for all events transpiring in the Gaza Strip and emanating from it."

Netanyahu was presented with a “bank of targets” that were gathered ahead of time by the IDF, as is custom, but this time they were called “Otzem targets” or bigger targets. Netanyahu approved all of the targets, one by one.

The latest escalation of violence began early Monday when a rocket fired from Gaza struck a home in central Israel, wounding seven people. Israel vowed to respond "forcefully," raising the prospect of a fourth war between Israel and Gaza's militant Hamas rulers.

The early morning rocket, fired from the Gaza Strip, demolished a residential house, leaving it in ruins, with tiles, broken furniture and debris scattered about. A shattered baby's crib lay among the rubble and two family dogs died in the explosion.

Fox News' Trey Yingst, Lucia I. Suarez Sang and The Associated Press contributed to this report.