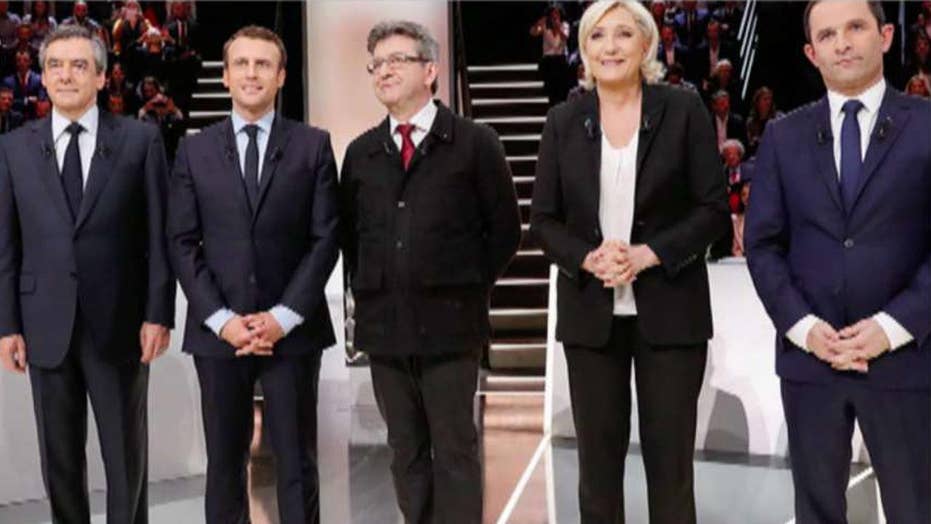 French voters to cast ballots in wake of terror incident

PARIS – Voters are going to the polls in France tomorrow in high stakes and unpredictable elections being closely followed--including in the U.S.

French are choosing between 11 different candidates for their next President. The two top vote getters go on to a run off two weeks from now. Of the leading candidates, only embattled center-right Francois Fillon is from an established party. Emmanuel Macron is an independent moderate. Marine Le Pen is a firebrand right wing populist. Jean-Luc Melenchon is a leftist.

The public is dissatisfied with a stagnant economy...and worried about insecurity. This was underscored by the Thursday attack on police on Champs Elysee which left one officer dead and two injured. Treated as terror by authorities, ISIS has claimed responsibility.

“Islamic State made no secret,” noted security analyst Olivier Guitta told us, “they wanted their followers to influence the outcome of the election by targeting France and French interests.”

It was revealed in local media reports Saturday that the killed gunman, Karim Cheurfi, was monitored for months as a terror risk and still fell through the cracks.

That’s a reason why the government here is beefing up security for vote. Even more officers are being added to the ranks of some 50,000 guarding polling stations. France wants to avoid any repeat of Thursday’s violence.

While campaigning is over, the candidates last statements played to security concerns, especially from anti-immigrant figure Le Pen. She called for sealing of the borders and expulsion of terror suspects.

Despite all this strong talk, big concerns remain about domestic matters, and many here apparently aren’t happy with any of the choices. Close to a third of the electorate remains undecided. Abstention levels could be at record highs.

“I think it’s a mess,” one Parisian told us.

“No matter who the President will be, 80 per cent of the people ‎will not have voted for the person,” another young man noted.

And an exasperated woman complained, “It's not very clear. We are afraid a little.”

The most unfavorable result for the US, according to many analysts, is that the French choose a President who wants France to leave NATO or the European Union or both.

While that is thought to be unlikely, in this election season anything goes.