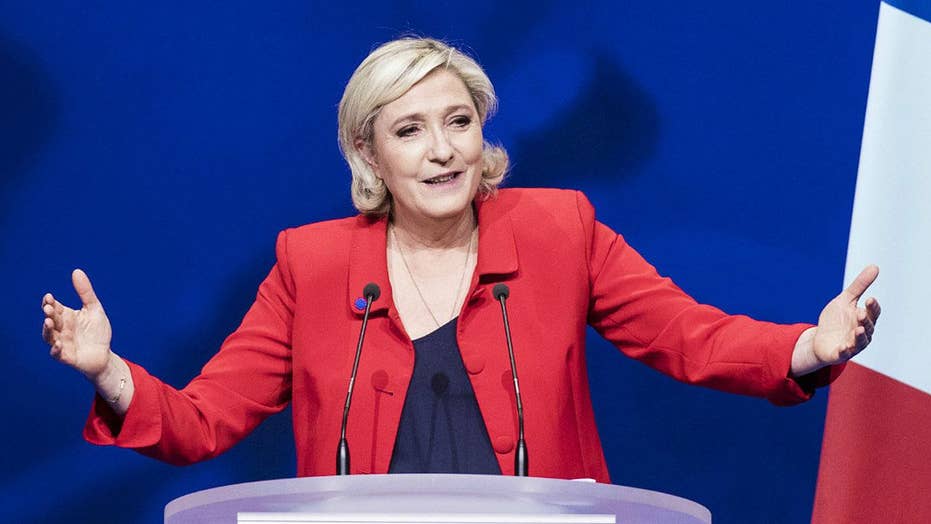 Implications of French election for the US

With one day before France officially heads to the polls for the first round of its presidential elections, candidate Marine Le Pen -- who has built her campaign on the populist anger that helped President Trump get elected -- is seeing a similar boost in support.

An opinion poll released Friday by Odoxa shows her nearly neck-and-neck with centrist candidate Emmanuel Macron, a jump in the past week. Analysts point out that the latest attack in Paris, which killed a police officer and left three other people wounded Thursday, may have contributed to her surge in support.

HOW FRANCE'S ELECTION COULD HAVE A BIG IMPACT ON UNITED STATES

Still, the race is far from decided. As many as one-third of voters had not settled on a candidate this week, Newsweek reported. President Trump said he believed the Champs-Elysees attack would help Le Pen, while former President Barack Obama offered Macron his best wishes in a phone call Thursday. Both Trump and Obama stopped short of full endorsements.

Newsweek found many voters across France saying they were leaning toward Le Pen -- which would parallel the surge for Trump last year among undecided voters and supporters who chose to lay low.

'COULD LE PEN WIN?' A GUIDE TO THE FRENCH PRESIDENTIAL ELECTION

André Robert, 56, said her tough stance on terror convinced him. “I’m voting for the candidate who’ll keep us safe.”

“Marine gets me shaking,” 65-year-old Monique Zaouchkevitch said, adding that she'd stayed out of politics until she heard Le Pen speak. “Marine, she’s close to the people.”

In another parallel to the U.S., some voters seemed to suffer from election fatigue and weren't blown away by any of the candidates. Gabriel Roberoir, a 61-year-old former public servant, called the election a “circus,” adding, “I don’t even know why any of them are running.”

Sunday's vote is the first round in the French elections, with the top two candidates advancing to a winner-take-all runoff on May 7. The high-stakes contest is viewed as something of a vote on the future of the European Union, with Le Pen calling for a referendum on France's membership in the bloc.

In a sign of how tense the country has become, a man holding a knife caused widespread panic Saturday at Paris' Gare du Nord train station. He was arrested and no one was hurt.

Conservative former Prime Minister Francois Fillon, whose campaign was initially derailed by corruption allegations that his wife was paid as his parliamentary aide, also appeared to be closing the gap, as was far-leftist, Jean-Luc Melenchon. Campaigning by the 11 presidential candidates got off to a slow start, bogged down by corruption charges around once-top candidate Fillon before belatedly switching focus to France's biggest fear: a new attack.

Le Pen has also echoed some of Trump's hard-line rhetoric on immigration, calling for hardening French borders to stanch what she describes as an out-of-control flow of immigrants.

She has spoken of radical Muslims trying to supplant France's Judeo-Christian heritage and, among other measures, has called for foreigners suspected of extremism to be expelled from the country.

Le Pen, a 48-year-old mother of three, has distanced herself from her father, National Front party founder Jean-Marie Le Pen, who has been convicted of crimes related to anti-Semitism and mocked the Holocaust as a "detail" of history.

Nevertheless, earlier this month she denied the French state was responsible for the roundup of Jews during World War II, drawing condemnation from other presidential candidates and Israel's Foreign Ministry.

A victory for Macron would be a vote of confidence in France staying in the EU. Obama, when he was in office, encouraged Britain not to leave, though it ultimately voted to do so anyway.

Trump backed Britain's decision to exit from the EU and has also predicted that other countries would make similar decisions. Yet during a White House news conference Thursday, the president said he believed in a strong Europe.

"A strong Europe is very, very important to me as president of the United States," he said.