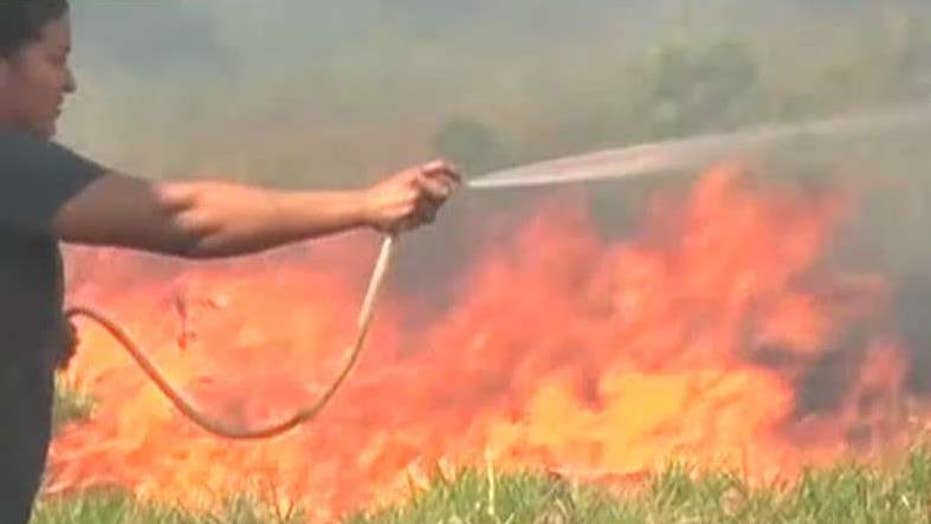 France and Ireland are threatening to block a trade deal with South American nations in a sharp escalation of tensions with Brazil over the fires ravaging the Amazon.

It comes as Bolsonaro said Friday that he was weighing deploying the military to fight the fires and protesters in Europe criticized Brazil's efforts so far.

The French statement accused Bolsonaro of lying to Macron about his stance on climate change and comes a day after the two feuded on Twitter. Marcon said countries around the world need to respond to the fires; Bolsonaro told Macron to butt out.

Fires burning in the State of Rondonia, Brazil, in the upper Amazon River basin. Brazil's National Institute for Space Research, a federal agency monitoring deforestation and wildfires, said the country has seen a record number of wildfires this year, an 84 percent increase compared to the same period last year.  (Maxar Technologies via AP)

"In light of Brazil's attitude these recent weeks," the statement said, Macron "can only conclude that President Bolsonaro lied to him during the Osaka Summit" in June where governments agreed on the "urgent need" to tackle climate change, pollution and environmental destruction.

"The decisions and statements from Brazil these recent weeks show clearly that President Bolsonaro has decided to not respect his commitments on the climate, nor to involve himself on the issue of biodiversity."

As a consequence, France says it will not ratify a tariff-slashing trade deal between the European Union and South American nations that has taken 20 years to negotiate.

Protestors gather to demonstrate against the Brazilian government and the fires in the Amazon in Berlin, Friday Aug. 23, 2019. (DPA via AP)

Irish Prime Minister Leo Varadkar also said "there is no way that Ireland will vote" for the deal "if Brazil does not honor its environmental commitments."

Fires in the Amazon rainforest—a major source of oxygen for the world—have increased to a record number, BBC reports.

The fires have dismayed environmentalists, who blame Bolsonaro’s policies and European leaders.

UK Prime Minister Boris Johnson called the fires "not only heartbreaking" but "an international crisis,” the BBC reported. "We stand ready to provide whatever help we can to bring them under control and help protect one of Earth's greatest wonders."

German Chancellor Angela Merkel said the fires were an "acute emergency... shocking and threatening not only for Brazil and the other affected countries, but also for the whole world."

In Dublin, protesters gathered at the Brazilian embassy in Dublin. Outside Brazil’s embassy in London, climate change activists chanted slogans and waved banners.

The protesters numbered in the hundreds and unfurled signs reading “stop destruction now,” “save our planet” and “I want you to panic.”