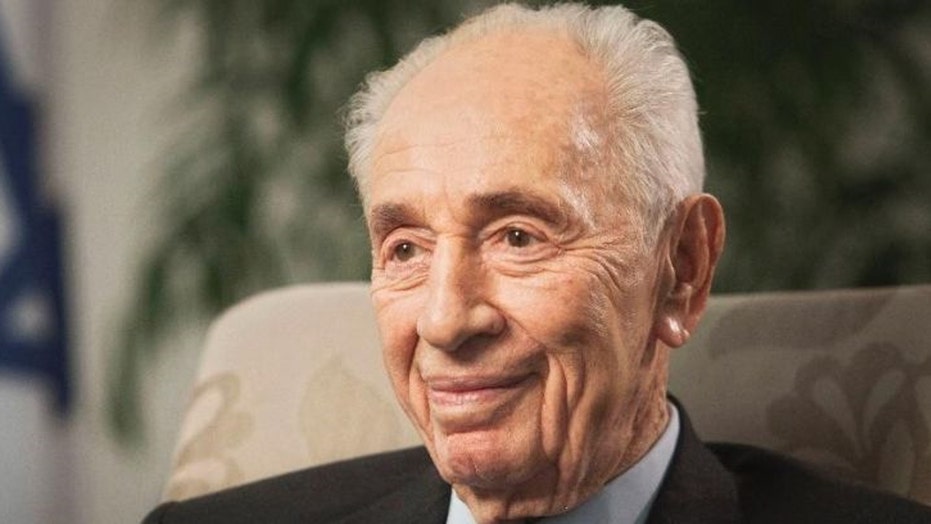 Peres died two weeks after suffering a massive stroke, he was 93

Shimon Peres, a Nobel Peace Prize laureate who was prime minister of Israel on three separate occasions before becoming the country's president, died Wednesday. He was 93.

Chemi Peres confirmed his father’s death Wednesday morning to reporters who were gathered at the hospital where Shimon Peres had been treated for the past two weeks. An official confirmed Shimon Peres’ death to Fox News earlier.

Peres’ condition deteriorated following a massive stroke two weeks ago that led to bleeding in his brain. He was sedated on a respirator during most of his hospitalization.

"Today with deep sorrow we bid farewell to our beloved father, the ninth president of Israel," Chemi Peres said.

"Our father's legacy has always been to look to tomorrow. We were privileged to be part of his private family, but today we sense that the entire nation of Israel and the global community share this great loss. We share this pain together."

Current Israeli Prime Minister Benjamin Netanyahu said in a statement that he would convene his Cabinet for a special session later in the late.

After that, a special committee is due to to prepare arrangements for a funeral that many international dignitaries and world leaders are expected to attend.

Officials said that Peres' body would lie in state at the Knesset, or parliament, on Thursday to allow the public to pay final respects. His funeral was set for Friday at Mount Herzl, the country's national cemetery in Jerusalem. Yona Bartal, a former personal aide to Peres, said the arrangements were in line with his wishes.

As word of Peres' death spread, reaction started pouring in from Israel and around the globe.

President Barack Obama eulogized him as a man who represented "the essence of Israel itself."

"There are few people who we share this world with who change the course of human history, not just through their role in human events, but because they expand our moral imagination and force us to expect more of ourselves. My friend Shimon was one of those people," he said. "A light has gone out, but the hope he gave us will burn forever."

Former President George H.W. Bush said in a statement that Peres "time and again helped guide his beloved country through the crucible of mortal challenge. But it was by his innate humanity, his decency, that Shimon inspired the world over and helped pave a path to peace broad enough that future generations will walk it one day, side-by side."

Former President George W. Bush added that he and his wife Laura were mourning Peres’ death. “For the rest of his life, he led it with a deep and abiding concern for his people and a commitment to freedom and peace. The Bush family will miss Shimon Peres and his grace, dignity, and optimism."

The Clintons said Israel has lost a leader "who championed its security, prosperity and limitless possibilities from its birth to his last day on earth." They called him "a genius with a big heart who used his gifts to imagine a future of reconciliation, not conflict."

In an unprecedented seven-decade political career, Peres filled almost every position in Israeli public life and was credited with leading the country through some of its most defining moments, from creating its nuclear arsenal in the 1950s, to disentangling its troops from Lebanon and rescuing its economy from triple-digit inflation in the 1980s, to guiding a skeptical nation into peace talks with the Palestinians in the 1990s.

During his second of three stints as Israel's Minister of Foreign Affairs, Peres shared the 1994 Nobel Peace Prize with then-Prime Minister Yitzhak Rabin and Palestinian leader Yasser Arafat for their work on the Oslo Accords. Just over a year later, Peres took over as Prime Minister for the second time after Rabin was assassinated by a Jewish extremist.

A protégé of Israel's founding father David Ben-Gurion, Peres led the Defense Ministry in his 20s and spearheaded the development of Israel's nuclear program. He was first elected to parliament in 1959 and later held every major Cabinet post -- including defense, finance and foreign affairs -- and served three brief stints as prime minister.

And yet, for much of his political career he could not parlay his international prestige into success in Israeli politics, where he was branded by many as both a utopian dreamer and political schemer. His well-tailored, neck-tied appearance and swept-back gray hair seemed to separate him from his more informal countrymen. He suffered a string of electoral defeats: competing in five general elections seeking the prime minister's spot, he lost four and tied one.

Peres finally secured the public adoration that had long eluded him when he has chosen by parliament to a seven-year term as Israel's ceremonial president in 2007, taking the role of elder statesman.

He was the world's oldest head of state when he stepped away from the post in July 2014, at the age of 90.

Shimon Perski was born on Aug. 2, 1923, in Vishneva, then part of Poland. He moved to pre-state Palestine in 1934 with his immediate family. His grandfather and other relatives stayed behind and perished in the Holocaust. Rising quickly through Labor Party ranks, he became a top aide to Ben-Gurion, Israel's first prime minister and a man Peres once called "the greatest Jew of our time."

At 29, he was the youngest person to serve as director of Israel's Defense Ministry, and is credited with arming Israel's military almost from scratch. Yet throughout his political career, he suffered from the fact that he never wore an army uniform or fought in a war.

Of his 10 books, several amplified his vision of a "new Middle East" where there was peaceful economic and cultural cooperation among all the nations of the region.

Despite continued waves of violence that pushed the Israeli political map to the right, the concept of a Palestinian state next to Israel became mainstream Israeli policy many years after Peres advocated it.

In 2000, Peres absorbed another resounding political slap, losing an election in the parliament for the largely ceremonial post of president to Likud Party backbencher Moshe Katsav, who was later convicted and imprisoned for rape.

Even so, Peres refused to quit. In 2001, at age 77, he took the post of foreign minister in the government of national unity set up by Ariel Sharon, serving for 20 months before Labor withdrew from the coalition.

Then he followed Sharon into a new party, Kadima, serving as vice-premier under Sharon and his successor, Ehud Olmert, before assuming the presidency.