A series of "boom after boom after boom" rocked a central Florida neighborhood after series of explosions from a  propane gas plant injured several people with at least three in critical condition.

All the workers at the Tavares, Fla., plant were accounted for early Tuesday after officials initially could not account for more than a dozen employees.

John Herrell of the Lake County Sheriff's Office said there were no fatalities despite massive blasts that ripped through the Blue Rhino propane plant late Monday night.

"Management is comfortable saying all of those they knew were there tonight have been accounted for," he said. 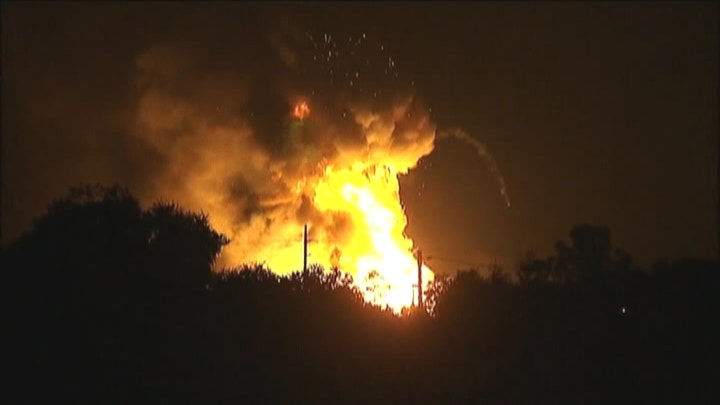 Herrell said some others drove themselves to area hospitals.

The Blue Rhino plant, which is northwest of Orlando, refilled propane tanks typically used for barbecues and other uses.

Herrell said a crew of 24 to 26 people was working at the plant on an overnight shift when the explosions occurred around 11 p.m.

Video footage on WESH-TV in Orlando showed fires burning through trucks used to transport propane tanks, which were parked at the plant. The fire was sending plumes of smoke into the air hours after the blast. Emergency crews could also be seen massing nearby.

Herrell said an evacuation zone was initially a one-mile radius but had been reduced to a half-mile radius. No injuries have been reported from residents in the neighborhood and residents were later allowed to return to their homes.

Marni Whitehead, 33, who lives less than a mile from the plant, said she was in bed ready to go to sleep when she heard a loud boom.

"It was like a car had run into my house, is what I thought had happened," she said.

"We knew right away it was the plant, the propane plant," Whitehead said. "After that, it was just sort of panic."

Herrell said officials believe the fire was contained and wouldn't spread to another part of the plant but they could not guarantee that.

According to the Leesburg Daily Commercial, the plant was built in 2004 and employs fewer than 50 people.