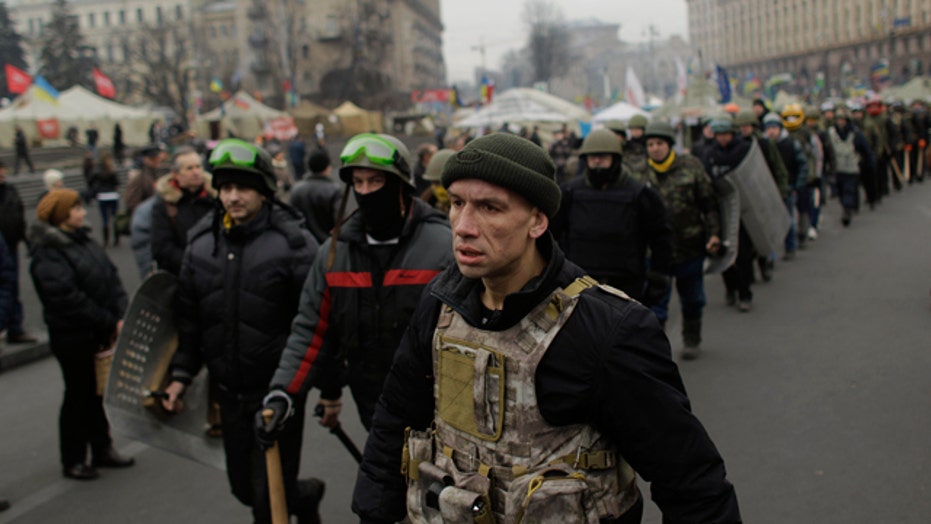 Ukraine's future in flux as protesters remain in Kiev

KIEV, Ukraine – Ukraine needs money, and fast — in weeks, not months. But bailing out the country of 46 million people will not be a matter of simply writing a big check.

For one, Ukraine has already burned the main international financial rescuer, the International Monetary Fund, by failing to keep to the terms of earlier bailouts from 2008 and 2010.

Now it needs help again, and its economic and financial problems are worse than before.

The currency is sliding, raising concerns that companies that owe money in foreign currency could go bust. Banks are fragile. A rescue with outside lenders can't be agreed until there's a government. And Russia could make things worse by demanding on-time payment for natural gas supplies or withdrawing a recently granted break on the price.

Analysts estimate the country will need between $20 billion and $25 billion for 2014 and 2015, perhaps $15 billion this year and $10 billion the next. The money would help the government pay salaries and pensions and maturing bonds. Acting President Oleksandr Turchynov says the treasury account used to pay bills is almost empty.

Ukraine's acting finance minister Yuri Kobolov says the country needs $35 billion (25.5 billion euros) to cover this year and next and expressed hope that Europe or the United States would help, hopefully within the next two weeks. Ukraine has major debt repayments coming up in June but analysts indicate it probably won't make it that far without help.

The Institute of International Finance, a Washington-based association of banks and financial companies, warned that Ukraine's finances "are on the verge of collapse."

"It's crunch time for the economy," said Lilit Gevorgyan, an analyst with IHS Global Insight in London. "All those issues they have swept under the rug are re-emerging."

U.S., European and IMF officials have expressed their willingness to support Ukraine. "There's a commitment at the highest level — the view is that Western governments will likely provide enough aid to avoid default," said Eurasia analyst Mujtaba Rahman.

The main rescue lender would be the IMF, but it could take time for it to formally agree on the bailout conditions. Countries such as Poland or Germany might offer bridge loans on a country to country basis until then. The European Commission, the EU's executive arm, could also make a small contribution.

Ukraine is battling to keep its currency, the hryvnia, from collapsing, which would bring down banks and companies that owe money in foreign currencies.

But the central bank is running out of money to do so. It spent some $2.8 billion of its reserves since the start of the start of the year and has about $16 billion left. Still the hryvnia has fallen a sharp 12 percent during that period.

The government also spends way more than it takes in, largely because the state owned gas company Naftogaz charges customers as little as one-fifth the cost of gas imported from Russia. The IMF halted payouts under earlier bailouts because the government refused to halt that practice.

The economy is estimated to be in a deepening recession, with industrial production, consumer spending and exports all dropping.

Yet a bailout involving the IMF would involve painful cutbacks and reforms that could quickly douse any euphoria over the country's political changes.

To begin with, the IMF would probably insist on letting the currency fall steadily, by as much as 30 percent, according to the IIF. That would be painful upfront — some banks may need bailouts as their foreign debts balloon. And standards of living would suffer as imports soar in price. Eventually the currency drop would help exports and make Ukraine a cheaper place for foreigners to invest, particularly if they see that the government is committed to reforming the economy by cutting bureaucracy and fighting corruption.

The government would also have to sharply raise the price of natural gas, which it is subsidizing heavily. The IIF estimates natural gas prices may have to be doubled, which would be a heavy blow to consumers and businesses at a time of hardship.

The IMF, for one, might be reluctant to sign on for a large loan, given Ukraine's track record of not holding to agreements. Instead, it might prefer to give smaller loans of $3 billion to $5 billion at intervals, according IHS analyst Gevorgyan. One now, one after the presidential election, and so on, "to make sure they remain on the path of reform."

Also, Russia, Ukraine's larger neighbor could intensify the country's troubles by getting tough on its supplies of natural gas.

Russia almost halved the price of its gas supplies to Ukraine in December as it sought to woo the country away from closer ties with the EU. That price cut is up for review every three months. Russia could also stop letting Ukraine delay monthly payments that are as large as $1.8 billion.

Russian officials have reacted with angry statements to the vote to remove Yanukovych. Yet it's not clear what Russia will do. Past behavior suggests they have been willing to take it easy on Ukraine — a major trading partner who now owes them money — when it's in their interest.