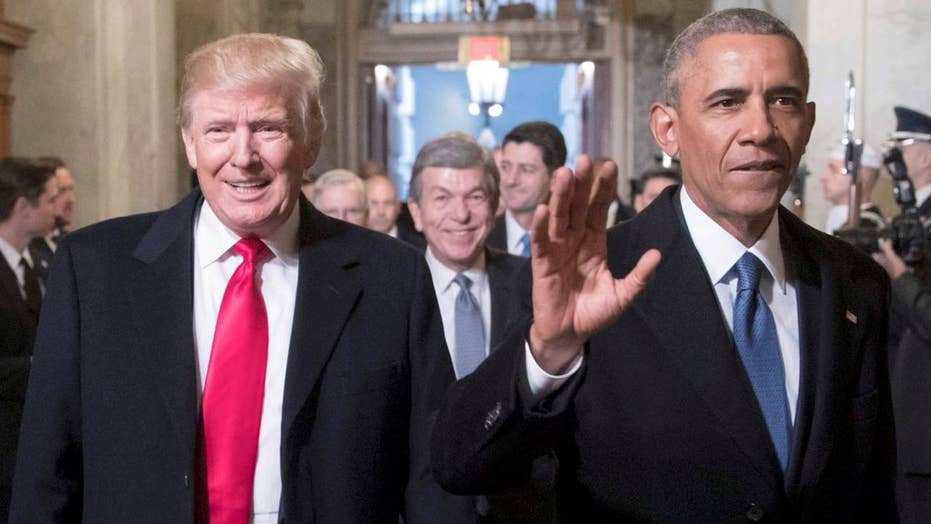 Trump vs. Obama on Syria

The difference in the coverage

News of President Trump’s response to the Syrian chemical attack left several Obama administration officials with a sense of frustration and a reluctant feeling of vindication.

Trump’s decision to act swiftly and decisively, with an airstrike, was what they had wanted to see Barack Obama do in 2013 when he was president and the world learned of the Syrian government’s chemical attack that killed some 1,400 people, including hundreds of children.

But Obama, they say, was too hesitant and too guided by a belief that dialogue was the way to deal with rogue leaders. He preferred the olive branch to the stick in his efforts to appeal to leaders with dangerous instincts, they say.

“I think he left a more dangerous world,” Barry Pavel, senior director for defense policy and strategy on the U.S. National Security Council staff from 2008 to 2010, said to Fox News.

“In Syria, a major mistake was treating it like a humanitarian crisis, when it was a major national security crisis that has caused destabilization on our closest allies in Europe,” Pavel said, “Syria has been a source of terrorist attacks in Europe and the United States, and future attacks. I worry about that very much.”

The world watched the United States’ underwhelming response to rogue moves by the Syrian government and by Russia in its invasion of Ukraine, Pavel said, and got the message that aggression would not be met with a military response.

He left a more dangerous world. Political adversaries knew we had the capability, but not the will.

“Potential adversaries know we had the capability, but not the will” to strike out at aggressive actions by certain nations against their neighbors or their own people, Pavel, who is director at Brent Scowcroft Center on International Security at the Atlantic Council, said. “Because they knew that the Obama administration would not use military force for any purpose, they felt free to conduct their coercive actions in the South China Seas, the Russians went into Syria and North Korea accelerated their nuclear arms program.”

Pavel called it unfathomable that it wasn't until this year that U.S. troops arrived in Europe to deter Russia from a repeat of its 2014 annexation of Crimea from Ukraine.

"That should have been done in 2014," he said. "We could have reinforced NATO to reassure our allies that we had their back, or we could have given the sovereign country under attack from Russia legitimate defensive weapons."

Pavel recalls the resistance he faced when he suggested that the U.S. be more forceful in handling of Syria. While the Obama administration said it did not want to commit hundreds of thousands of troops to a new military conflict, Pavel said there were choices between a full-scale commitment and complete inaction.

Gary Samore, who served for four years as Obama’s White House coordinator for arms control and weapons of mass destruction (WMD), said the Iran nuclear deal – widely criticized by Republicans – has been effective.

That proves, Samore said, that not all adversaries can be handled the same way.

“The constraints that Obama negotiated are holding,” Samore, who is executive director for research at the Belfer Center for Science and International Affairs at Harvard University, said. “But who knows, in a couple of years they might renege on the agreement. It’s true that you cannot trust the Iranians, but can we spot cheating? The agreement has mechanisms for us to restore U.N. sanctions. If we can catch them cheating we have much stronger rationale for using the military. We can say we tried the diplomatic approach, it gives you a stronger argument for using the military.”

Military action can be risky with an unstable leader who has access to nuclear weapons, Samore said.

“The Syrians are so weak,” he said. By contrast, “Iran has options. It can retaliate against U.S. allies, against Israel, Saudi Arabia. North Korea is another example.”

“I applaud Trump,” Samore said. “It was the kind of strike that Obama was planning – a limited military attack against the airfields in order to deter Assad from carrying out additional chemical weapons attacks, but he decided not to use it. Obama made a huge mistake by saying he was going to go to Congress for authorization, it turned out he did not have the votes.”

“Trump was very smart to do it without congressional support,” Samore said.

“I think the Trump administration is putting the world on notice,” he said. “The U.S. can use military force to achieve particular goals without getting mired in a protracted conflict.”

Michael McFaul, Obama’s ambassador to Russia, said in an interview with the New York Times that the former president’s penchant for a kinder, gentler approach to adversaries was counterproductive.

“For me, this tragedy underscores the dangers of trying to do deals with dictators without a comprehensive, invasive and permanent inspection regime,” said McFaul after the Syrian chemical attack earlier this month. “It also shows the limits of doing deals with [Russian President Vladimir] Putin. Surely, the Russians must have known about these chemical weapons.”

Other experts say that while reaching out to foes of the United States may not yield the desired results, playing hard ball may yield far worse consequences.

“Imagine what Syria would look like without that deal,” former Deputy Secretary of State Antony J. Blinken said to the Times. “It would be awash in chemical weapons, which would fall into the hands of ISIS, Al Nusra or other groups.”

Blinken said that the Obama administration was not blind to the Syrian government’s deceptive ways.

“We always knew we had not gotten everything,” he said, “that they Syrians had not been fully forthcoming in their declaration.”

Pavel says there is no one-size-fits-all answer to dealing with adversaries.

“I don’t agree that you should never come to agreements with dictators,” he said, “as long as the agreements are hard-headed and have necessary provisions, and they are largely enforced.”

“During the Cold War, we had agreements, and that contributed to stability,” he said.