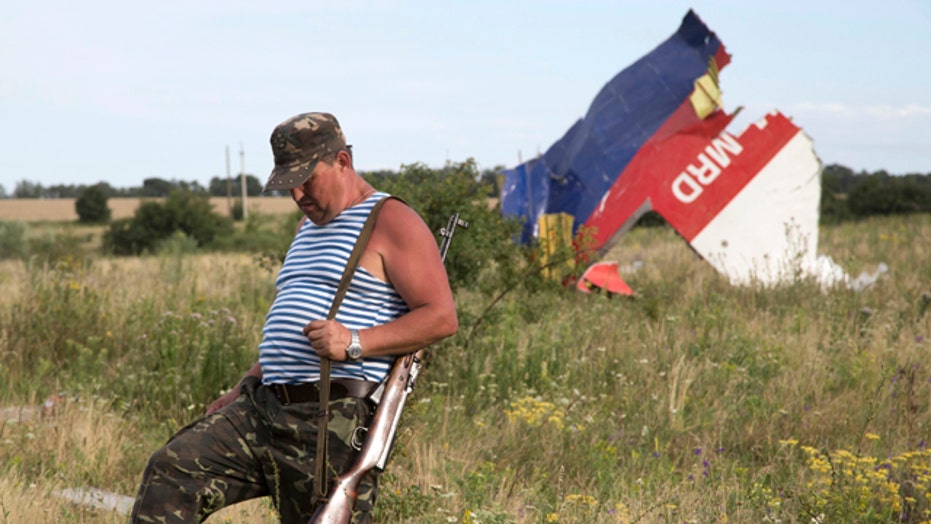 The European Union agreed Tuesday to impose new sanctions against Russian officials deemed responsible for the country’s actions in Ukraine, amid growing international anger after Malaysia Airlines Flight 17 was shot down over rebel-held territory.

European foreign ministers stopped short, at least for now, of more forceful sanctions that would hit full sectors of the Russian economy.

The EU agreed to impose visa bans and asset freezes on more Russian officials, Dutch Foreign Minister Frans Timmermans said. He did not say how many officials were targeted or reveal their names.

He said the ministers also asked the 28-nation bloc's executive arm to prepare for more sweeping sanctions — including targeting the arms, energy and financial sectors — if Russia fails to back down from destabilizing Ukraine.

"Russia has not done enough to contribute to a de-escalation of the conflict," German Foreign Minister Frank-Walter Steinmeier said.

EU foreign policy chief Catherine Ashton said the priority for the ministers' meeting in Brussels was to deal with the concerns of the Netherlands, which lost more nationals in the disaster than any other. That means repatriation of the victims' bodies and a full investigation of the crash and its cause, she said.

Meanwhile, a refrigerated train carrying the bodies of many of the victims of the crash arrived in the Ukrainian city of Kharkiv Tuesday, as an international monitoring group charged that pro-Russia rebels continued to tamper with the crash site.

If the accusations are true, the rebels would be acting in defiance of a United Nations resolution that calls for international investigators to have unfettered access to where the plane went down in eastern Ukraine last week.

After a 17-hour journey from the town of Torez in rebel territory, the train carrying the bodies pulled into a station in Kharkiv around 11:40 a.m. local time (4:40 a.m. ET). The train gave a low-pitched blast from its horn as the grey corrugated refrigerator cars slowly rolled through weed-choked tracks onto the grounds of a factory where the bodies were being received.

Kharkiv is where the Ukrainian government has based its investigation into the crash that killed all 298 people on board.

Dutch Prime Minister Mark Rutte says his government aims to have the first bodies returned on Wednesday. "It is our aim -- and at the moment our expectation -- that sometime tomorrow the first plane carrying victims will leave for Eindhoven," he said.

Oleksander Kharchenko, spokesman for the state committee on the crash, said "we will do our best" to send the bodies to the Netherlands by the end of the day Tuesday. Of the 298 who died in the crash, 193 were Dutch citizens.

Meanwhile, a spokesman for the Organization for Security and Cooperation in Europe (OSCE) told Fox News that the rebels had used chainsaws to dismantle the nose cone and front sections of the Boeing 777 and had carted some pieces of the plane away.

The spokesman said that investigators who have seen the debris believe that the surface-to-air missile responsible for bringing the plane down impacted near the aircraft's front section. That hypothesis would require a full examination of the parts reportedly tampered with by the rebels crucial for confirming what many Western leaders already believe: that Flight 17 was shot down by rebels using a SA-11 antiaircraft missile supplied by Moscow.

The claims made by international monitors of rebel tampering with the debris are not new. On Monday, OSCE monitors observed workers at the crash site "hacking into the fuselage with gas-powered equipment." The spokesman added that there was no security perimeter around one of the bigger debris fields, and monitors saw that one of the largest pieces of the plane "had somewhat been split or moved apart."

The report drew outrage from President Barack Obama, who asked of the rebels, "What exactly are they trying to hide?"

"This is an insult to those who have lost loved ones. This is the kind of behavior that has no place in the community of nations," Obama added.

On Tuesday, Australian Prime Minister Tony Abbott, whose country lost 37 citizens and residents in the disaster, decried what he called "evidence-tampering on an industrial scale" and claimed that his country, along with Malaysia and the Netherlands, should be responsible for providing security at the crash site as nations "wronged" by the tragedy.

However, Abbott did not elaborate on whether he would be prepared to send troops or police to secure the site for independent investigators, saying the security arrangements were still under discussion among government leaders.

Earlier Tuesday, the rebels handed over both black boxes from Flight 17 to Malaysian investigators in Donetsk. A rebel leader, Alexander Borodai, said the orange-colored flight recorders were being handed over to Malaysian officials on the condition that they would be delivered to experts at the International Civil Aviation Organization.

"I can see that the black box is intact even though a little bit damaged, but in a good condition," Col. Mohamad Sakri of the Malaysian National Security Council. He added that the number one priority was for the bodies of the victims to be delivered to Amsterdam.

International forensics experts had finally gained access to the crash site Monday — an emotional experience for the head of the Dutch National Forensic Investigations Team, Peter Van Vliet. Seeing the wreckage gave him goosebumps, he said.

The team stumbled across remains that had not yet been removed and inspected the perished passengers' luggage.

In Moscow, Russian President Vladimir Putin said Russia would do "everything in its power" to facilitate the investigation including putting pressure on the rebels, but said that "was not enough" to resolve the situation. During a meeting with Russia's Security Council, he again lashed out at Kiev for its military offensive to dislodge the rebels.

Russian officials insisted that the country had not given the rebels any surface-to-air missiles — and said they have no evidence that any missiles were launched at all. They asked the U.S. to share any satellite images of the launch.