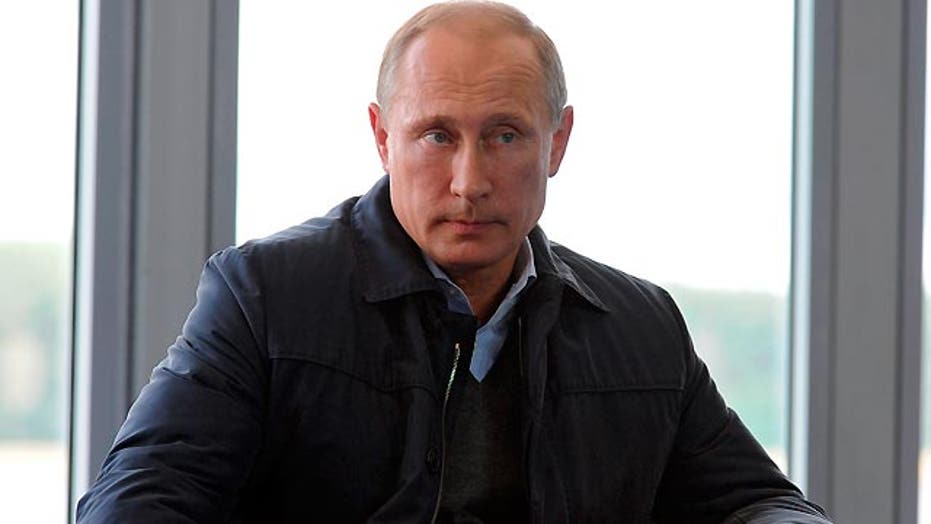 Russian President Putin warns US and its allies

The European Union announced Saturday that new economic sanctions are being drawn up in response to the apparent incursion of Russian troops into Ukraine, although some European leader were hesitant about straining relations with Russia and damaging their own economies over the conflict.

Ukrainian President Petro Poroshenko, who briefed a summit of the 28-nation EU's leaders in Brussels, said a strong response was needed to the "military aggression and terror" facing his country.

French President Francois Hollande and Swedish Prime Minister Fredrik Reinfeldt said upon their arrival for the summit in Brussels the leaders will make a political decision and then ask the EU's executive arm to finalize the fine print of new sanctions.

Hollande argued that if Russia failed to reverse the flow of weapons and troops into Ukraine, then it would leave the EU with no other option than to impose new sanctions.

"Are we going to let the situation worsen, until it leads to war?'' Hollande said at a news conference, Reuters reported. "Because that's the risk today. There is no time to waste."

"Russia is practically in the war against Europe," she said in English, The Associated Press reports.

NATO estimates that at least 1,000 Russian soldiers are in Ukraine even though Russia denies any military involvement in the fighting that has so far claimed 2,600 lives, according to U.N. figures.

"Countries in Europe shouldn't have to think long before realizing just how unacceptable that is," he said. "We know that from our history. So consequences must follow if that situation continues."

However some leaders were cautious about implementing new sanctions, The Wall Street Journal reported, with leaders of Hungary and Slovakia blasting sanctions as ineffective measures that would only hurt EU economies as much as they hurt Russia.

Austrian Chancellor Werner Faymann warned the Union that it should be "speaking less" about sanctions.

"The effect of sanctions as they have been applied so far hasn't always produced what some expected," he said.

In Brussels, European Commission President Jose Manuel Barroso provided no specifics about which sanctions were being considered but also said that "sanctions are not an end in themselves," but a means to dissuade Russia from further destabilizing Ukraine.

The U.S. and the EU have so far imposed sanctions against dozens of Russian officials, several companies and the country's financial industry. Moscow has retaliated by banning food imports.

Grybauskaite said the EU should impose a full arms embargo, including the canceling of already agreed contracts. France has so far staunchly opposed that proposal because it has a $1.6 billion contract to build Mistral helicopter carriers for Russia.

New EU sanctions have to be agreed unanimously -- a requirement that has in the past blocked or softened decisions since some nations fear the economic fallout. Russia is the EU's No. 3 trading partner and one of its biggest oil and gas suppliers.

Barroso said that the EU -- a bloc encompassing 500 million people and stretching from Lisbon to the border with Ukraine -- stands ready to grant Kiev further financial assistance if needed. The bloc will also organize a donors' conference to help rebuild the country's east at the end of the year, he added.

Ukrainian officials say that their forces face increasingly strong resistance from Russian-backed separatist rebels just weeks after racking up significant gains and forcing rebels out of much of the territory they had held.

Ukrainian forces had been surrounded by rebels in the town of Ilovaysk, about 15 miles east of the largest rebel-held city of Donetsk for days.

"We are surrendering this city," Ukraine's Lysenko told reporters. "Our task now is to evacuate our military with the least possible losses in order to regroup."

Lysenko said that regular units of the military had been ordered to retreat from Novosvitlivka and Khryashchuvate, two towns on the main road between the Russian border and Luhansk, the second-largest rebel-held city. Ukraine had claimed control of Novosvitlivka earlier in August.

Separately, Ukrainian forces said one of their Su-25 fighter jets was shot down Friday over eastern Ukraine by a missile from a Russian missile launcher. The pilot ejected and was uninjured, the military said in a brief statement.