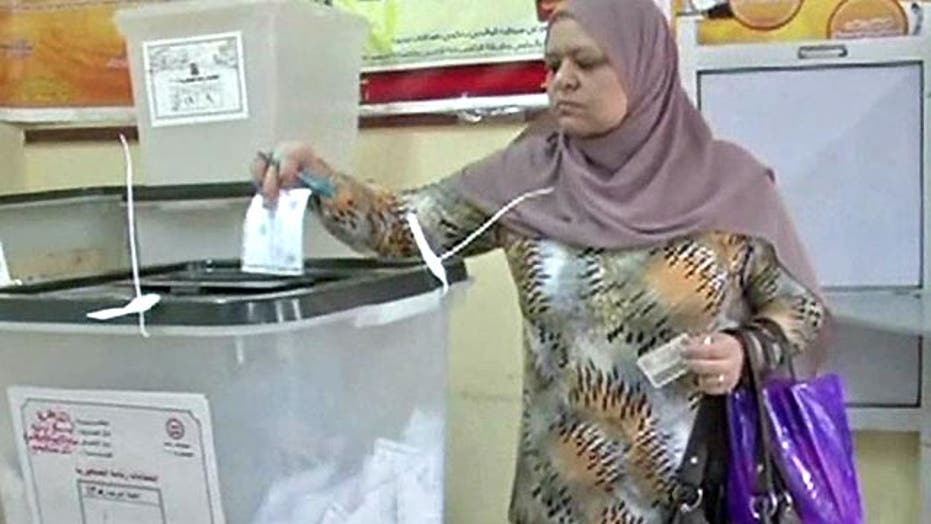 CAIRO – With nearly all ballots counted, Egypt's former military chief has won a crushing victory over his sole opponent in the country's presidential election, his campaign said Thursday. But the results were stained by questions about turnout despite a robust government effort to get out the vote.

Retired field marshal Abdel-Fattah el-Sissi won more than 92 percent of the votes, compared with 2.9 percent percent for his sole opponent and 4 percent of invalid votes, according to a tally released by his campaign.

His victory was never in doubt, but the career infantry officer had pushed for an overwhelming turnout as well to bestow legitimacy on his ouster last July of Egypt's first freely elected president, the Islamist Mohammed Morsi.

Turnout was more than 46 percent after officials extended voting to a third day. That figure was lower than the 52 percent turnout in the 2012 presidential election that vaulted Morsi to power. It also was lower than the bar el-Sissi himself set in his last campaign interview, when he said he wanted three-quarters of the country's 54 million registered voters to cast ballots so he could "show the world" his support.

It was telling that Sabahi, who came in third in the previous election, garnered less than the 1.03 million spoiled ballots cast.

Official election commission figures will likely be released next week but are not expected to change much due to the wide gap in results.

Mario David, the head of the European Union observers' mission, said the election that ended Wednesday was carried out within the boundaries of the law, with only minor violations like campaigning near polling centers.

However, senior member of the EU mission, Robert Goebbels, pointed out that the relatively high turnout should not be taken as evidence of democracy.

Boycott, he said, is a form of freedom of expression and no one should speak for the "silent" voters.

"High turnout is not necessarily proof of democratic elections," he said, adding that turnout in totalitarian states like North Korea in which there is only a single candidate has run as high as 99.9 percent.

The unusual measures taken by the government to get voters to the polls also raised skepticism over the extent of support.

Widespread reports of empty polling stations in the first two days of voting also prompted the state to abruptly add a third day after declaring the second day to be public holiday to free voters to cast ballots had made little difference. Government officials also offered to bus-in voters to polling centers and threatened to invoke a rarely enforced law that would allow them to fine boycotters. Bus and trains were free to allow people to return to home districts and cast ballots.

"Citizen enthusiasm was dampened by the widespread perception that this election was not meaningful and that its results were predetermined," the U.S.-based Democracy International said in a statement Thursday.

Interim President Adly Mansour insisted that legitimacy had been achieved. He put turnout at 46 percent and said it showed "a broad consensus" for the political roadmap transition set by the military after Morsi's ouster. He said the voting was free of any "serious misconduct."

Islamists, once the country's most powerful political machine, had called a boycott of the vote, as had many secular "revolutionary" youth groups.

After polls closed, several thousand el-Sissi supporters celebrated in Cairo's Tahrir Square, birthplace of the 2011 uprising that toppled longtime autocrat Hosni Mubarak. They waved Egyptian flags, el-Sissi posters and danced. Similar celebrations took place in the Mediterranean city of Alexandria and a string of other cities north of the capital and in the oasis province of Fayoum to the southwest.

Sabahi objected to the extension, saying it aimed to "distort" the will of the people. His campaign pulled its representatives from polling stations Wednesday to protest what it called a campaign of intimidation and arrests of its campaign workers.

Sabahi's spokesman, Hossam Moenis, told ONTV network that a member of the campaign has been referred to a military tribunal.

"We are digging a channel for democracy ... in the face of an undemocratic project," he said. "The same mentality that we thought we managed to topple on Jan. 25, is back and ruling," -- a reference to the start of the 18-day, anti-Mubarak uprising in 2011.

Critics said the lack of enthusiasm at the polls was in part due to apathy among even el-Sissi supporters, knowing that his victory was a foregone conclusion. Others said it showed discontent with el-Sissi, not just among his Islamist foes but also among a broader section of the public that believes he has no concrete plans for Egypt's woes and fears he will return Egypt to the autocratic ways of Mubarak.

The measures to increase voter numbers were also startling because el-Sissi was not expected to need any help. The government and media had been whipping up adulation for el-Sissi over the past 10 months, depicting him as a warrior against terrorism and the only person able to tackle Egypt's economic problems, high unemployment, inflation and instability.