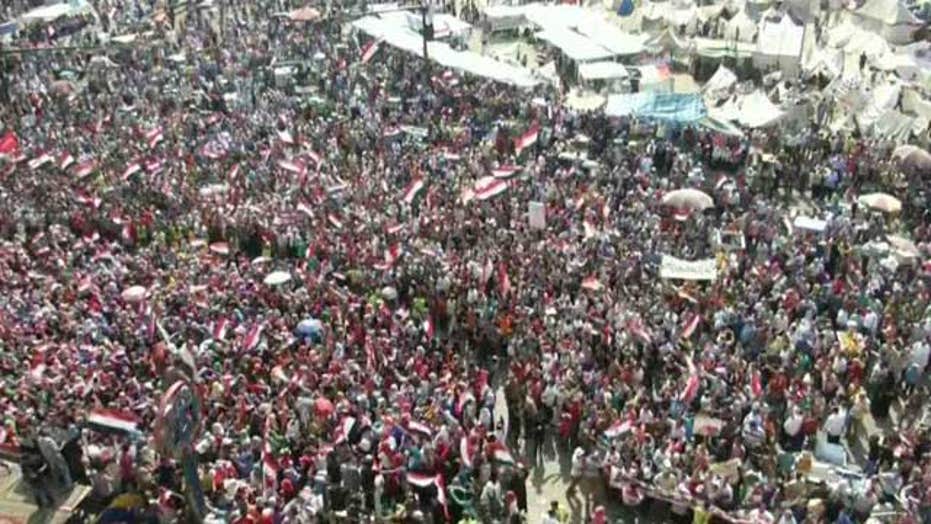 Bolton: Political crisis in Egypt 'not going away'

Egypt teetered on the brink of overthrow late Tuesday after a defiant Egyptian President Mohammed Morsi rejected an ultimatum issued by the military and at least 23 people were reported killed in clashes between his supporters and opponents.

Defense officials have pledged to intervene if the government does not address public demands and end the political turmoil engulfing Cairo.

In a speech to the nation broadcast live late Tuesday, Morsi said he would not step down and would protect his "constitutional legitimacy" with his life.

The deadly clashes came just one day before the deadline set by the military for Morsi and his opponents to work out their differences.

The Associated Press reported that at least 23 people were killed in Cairo Tuesday and more than 200 injured, according to hospital and security officials who spoke on condition of anonymity because they were not authorized to talk to the media.  Most of the killings took place outside Cairo University located at Cairo's twin city of Giza. The official Al-Ahram website reported that the armed forces deployed armored vehicles to the area.

The latest deaths take the number of people who have died since large-scale protests began Sunday to 39, many of them in shootings of anti-Morsi gatherings.

Morsi said Tuesday he would pursue his own plans for reconciliation between his government and opposition leaders, according to Reuters.

The Egyptian leader has repeatedly vowed not to quit, saying that street action must not be allowed to remove an elected president. At the same time, Morsi has offered no concessions, although his opponents appear in no mood to accept anything short of his removal.

His Islamist supporters, some hardliners who belong to formerly armed militant groups, have vowed to defend him.

Reuters reported that a senior member of the Muslim Brotherhood's Freedom and Justice Party (FJP) said "everyone" rejected the military declaration.

"Solutions will be in the framework of the constitution," Yasser Hamza, a member of the FJP's legal committee, told Al Jazeera. "The age of military coups is over."

The comments came as a foreign ministry official said two spokesmen for Morsi -- Omar Amer and Ihab Fahmy -- have stepped down after nearly five months representing him. On Monday, six of his cabinet members quit.

Canada has closed its embassy in Cairo, citing security concerns.

In a highly symbolic move, crowds camped out in Tahrir Square, the birthplace of the 2011 uprising that toppled former Egyptian leader Hosni Mubarak. They also massed Tuesday outside the Qasr el-Qobba presidential palace where Morsi has been working in recent days, in addition to filling wide avenues outside another palace, and in main squares in other cities.

It was not clear if Morsi was in the palace.

Across town, Morsi's backers were hunkered down at their own rally site.

The FJP on Tuesday called on supporters to take to the streets to resist the army.

"This is a very critical moment in Egyptian history - we are facing a moment very similar to 1952," Freedom and Justice Party spokesman Murad Ali told Reuters. "Egyptians are very aware that there are some people that are trying to push the country back in history and back to dictatorship."

On Monday, President Obama urged Morsi to respond to issues raised by the protesters.

The White House released a statement saying that Obama told Morsi in a telephone conversation that "the United States is committed to the democratic process in Egypt and does not support any single party or group." The statement addedthat Obama "encouraged [Morsi] to take steps to show that he is responsive to [protesters'] concerns, and underscored that the current crisis can only be resolved through a political process."