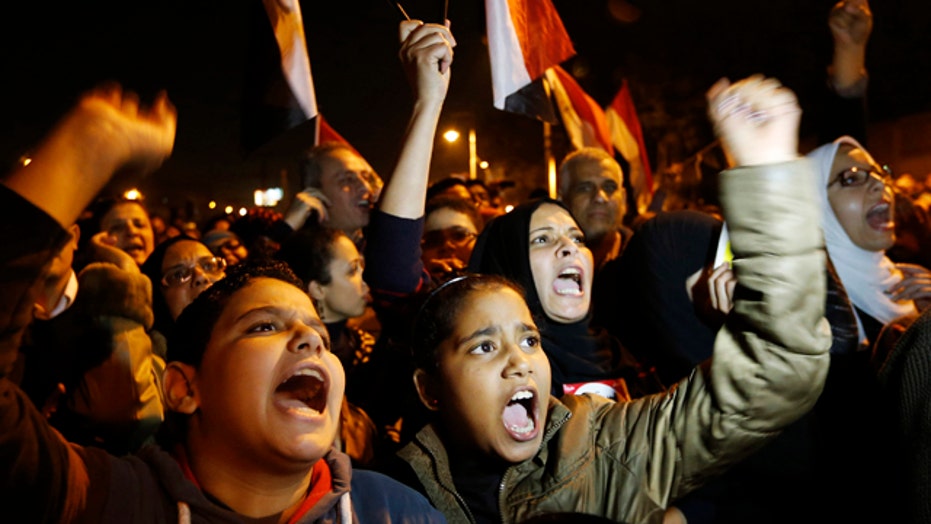 CAIRO – Egypt's main opposition alliance called for a "No" vote in the referendum on a disputed constitution rather than a boycott, hours after Islamist President Mohammed Morsi's government forged ahead by starting overseas voting in diplomatic missions for expatriates.

The opposition's decision did not dispel the atmosphere of a nation in crisis, deeply polarized over the referendum that has stoked three weeks of turmoil on the streets. The opposition still plans more protests and the country's judges are still on strike over a decree by Morsi, since rescinded, that placed him above judicial oversight. And if the referendum passes, there is potential for even greater upheaval.

There are also growing concerns about the already flailing economy a day after Egypt requested a postponement of a $4.8 billion IMF loan. Morsi suspended a package of tax hikes that had been part of a program to reduce Egypt's huge budget deficit for fear the measure would add to political tensions.

The opposition said it still may boycott the vote starting in Egypt on Saturday if its conditions are not met.

Hamdeen Sabahi, one of the leaders of the opposition National Salvation Front, said at a news conference the alliance would urge its supporters to boycott if judges do not oversee the vote and the state does not provide security at the polls. The country's major judges' union said Tuesday it would boycott the referendum, abstaining from their traditional role of oversight at the polls.

"The Front decided to call upon the people to go to the polling stations and reject the draft by saying `No,"' said Sabahi, a leftist politician who finished a close third in the June presidential election narrowly won by Morsi. "The people will rally at the polls and have a chance to topple the constitution by saying `No,"' he said, reading from a prepared statement.

The Islamist-dominated constitution drafting committee rushed through the document in a marathon session last month. Islamists say its approval will restore political stability and allow the rebuilding of the institutions of government. They say it contains new articles banning many of the human rights abuses that were commonplace under Morsi's ousted predecessor Hosni Mubarak, whose 29-year regime was ousted in a popular uprising nearly two years ago.

Liberals, secularists, Christians, and other critics say the draft is full of obscurely worded clauses that could give clerics a say over legality of legislation and allow civil rights to be curtailed by hardline interpretations of Islamic Shariah law. They say the 100-member constituent assembly tasked to draft the constitution was packed with Islamists and ultraconservatives who ignored other groups' concerns and sped the draft through.

The nationwide referendum was initially scheduled to take place on Dec. 15, but in a last minute decree on Tuesday, Morsi ordered the voting stretched into another round on Dec. 22. Voting must be overseen by judges but the powerful judges' union voted Tuesday not to supervise the process, protesting an earlier and now rescinded decree by Morsi placing him above judicial oversight. Their absence would throw the legitimacy of the vote into and thus the legitimacy of the constitution itself.

It was not immediately clear whether the judges will now oversee the voting after the opposition said it would participate in the referendum. But the judges have all along said their stand is inspired by what they see as Morsi' assault" on the judiciary and the siege of the nation's highest court by Islamists loyal to Morsi. The court was widely expected to disband the constitution writing assembly in a session scheduled for Dec. 2. The panel rushed the vote on the draft on Nov. 29-30 and Morsi ordered the referendum on Dec. 1.

Zaghloul el-Balshi, head of the referendum's organizing committee, said on Tuesday that 9,000 judges had agreed to oversee the voting. His claim could not be independently verified. The total number of polling stations in Egypt is nearly 13,000, each of which normally requires a judge. Aides to Morsi said before that judges are only needed to supervise the 9,000 main stations, while government employees or university lecturers can fill in at the rest.

The start of overseas voting after nearly three weeks of mass opposition protests showed the determination of Morsi to go forward with the process despite outrage from the liberal opposition, which contends it places restrictions on liberties and gives Islamists a big say on how the country is run.

The opposition front had been expected to call for civil disobedience, such as general strikes, to escalate the recent mass protests against Morsi. Mass rallies are scheduled for Friday, on the eve of the vote.

The opposition has been considering several options to force Morsi to back down and postpone the vote.

Ahmed Khairi, a spokesman for the liberal Free Egyptians party -- a member of the National Salvation Front -- said the party had been in favor of a boycott.

"There were several points of views, but as long as everybody agreed on going for `No,' we changed our position," he said. Other options, such as more rallies and civil disobedience, remain on the table.

"The constitution is a decisive battle but not the final one. We will keep on fighting for our demands and for Egypt to become a country for all. This will not be the end," he said.

Islamists who support the draft constitution, led by Morsi's Muslim Brotherhood and the ultraconservative Salafis, have been distributing flyers urging a "Yes" vote along and putting up posters with the same message. They have been also been using mosques to disseminate their message.

Several hundred Islamists loyal to Morsi have meanwhile been staging a sit-in outside a media complex known as "media city" on the outskirts of Cairo. The complex is home to some of the most influential independent TV networks critical of the president and his Muslim Brotherhood. The Islamists are threatening to storm the complex.

The opposition has been boycotting a "national dialogue" hosted by the president, saying they don't trust Morsi after he failed to live up to promises during the election campaign to form a representative national coalition government and to win a broad consensus before putting the constitution to a vote.

In another twist, Egypt's military withdrew a call for talks with the opposition, one day after proposing it.

Military spokesman Col. Ahmed Mohammed Ali was quoted by the official MENA news agency as saying Defense Minister Abdel-Fatah el-Sissi decided to postpone Wednesday's meeting because "the response to the invitation was below expectations." The statement was not explained further.

"Lt-Gen. el-Sissi would like to seize this chance and call on all national and political forces and every segment of the glorious Egyptian people to shoulder their responsibility toward the nation and the citizens at this critical and sensitive time," Ali said.

That announcement came at the same time the opposition said it was willing to attend the meeting.

El-Sissi's call, in the midst of dueling mass protest for and against the constitution, was seen as a return of the powerful military to the political scene after Morsi's election ended nearly 17 months of military rule following Mubarak's February 2011 ouster. It was the second time this week the generals have addressed the crisis, signaling their return to the political fray.

On Saturday, the military warned of "disastrous consequences" if the crisis is not resolved.

The cancellation of the army's meeting was likely made under pressure from Morsi, who has been adamant since he took office that the military must stick to its core mission, such as protecting borders. Although Morsi appointed army chief el-Sissi, he is not seen as tightly controlled by the president.

"The military is boiling. The military doesn't live in isolation from the street and what is happening there. We have judges on strike, a constitutional court under siege and a media city under siege," said retired army general and military analyst Hossam Sweilam.

"We have large sectors of Egyptians rejecting the referendum and we have so many ways to postpone it. But the stubborn leadership is insisting on going forward with the process. All this is reflected on the armed forces."

"The patience of the officers is not guaranteed to remain the same forever," said Sweilam, who is widely thought to be close to the military.

The vote for half a million eligible expatriates overseas could give hints at which direction the referendum is going. Egyptian expatriates in the Gulf are known to lean toward Islamists while others in Europe, North America and Australia, among them a large number of Christian migrants, lean more toward liberals.

In the Egyptian embassy in Sanaa, Yemen, a handful of voters showed up after the vote started at 8:00 a.m. local time. Mohammed Abdullah, a physician, said he voted yes because he wants stability, and any changes could be made later. "We can make whatever amendments we want but we have to get through this and return to normalcy," he said.

The Middle East News Agency says that Egyptian expatriates have up until Saturday to cast ballots in 150 diplomatic missions worldwide.

Two months after passing the referendum, the country is scheduled to have new parliamentary elections. A parliament elected after the uprising was disbanded after courts ruled the elections law was unconstitutional.