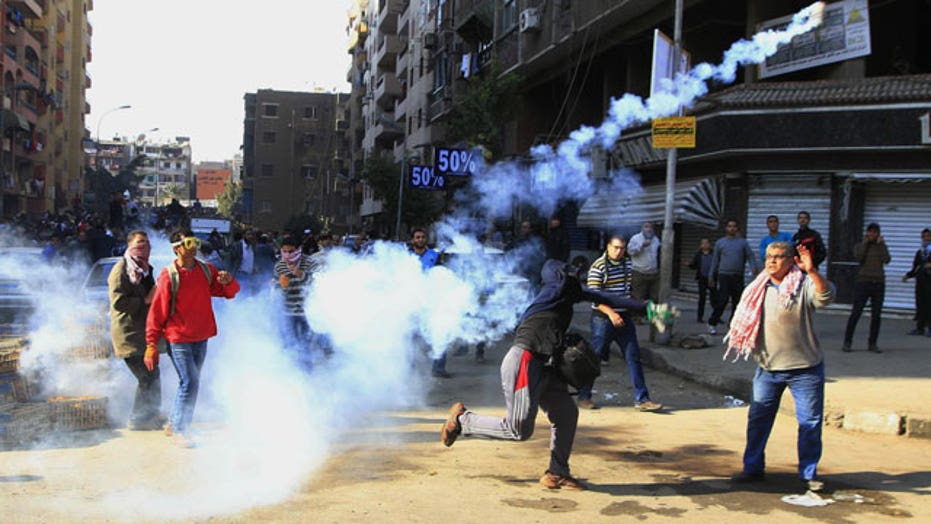 CAIRO – Egypt's military-backed interim government on Wednesday declared the Muslim Brotherhood a terrorist group, criminalizing all its activities, its financing and even membership to the group from which the country's ousted president hails.

The announcement is a dramatic escalation of the fight between the government and group, which has waged near-daily protests since the July 3 popularly backed military coup that toppled President Mohammed Morsi.

Hossam Eissa, the Minister of Higher Education, read out the Cabinet statement after long meeting, saying: "The Cabinet has declared the Muslim Brotherhood group and its organization as a terrorist organization."

He said that the decision was in response to Tuesday's deadly bombing targeting a police headquarters in a Nile Delta city which killed 16 people and wounded more than 100. The Brotherhood has denied being responsible for Mansoura attack and an al-Qaida inspired group has claimed responsibility for the suicide bombing on Wednesday.

"It's not possible for Egypt the state nor Egypt the people to submit to the Muslim Brotherhood terrorism," he added.

Eissa offered no evidence in his speech linking the Brotherhood to Tuesday's attack.

The Brotherhood, founded in 1928, denounced violence in the late 1970s. Ibrahim Elsayed, a member of the Muslim Brotherhood's political group, the Freedom and Justice Party, said the government announcement will have no impact on the work or the beliefs of the group, because it has seen repeated government repression and continued to exist with a moderate view of Islam.

"This decision is as if it never happened. It has no value for us and is only worth the paper it is written on," he told The Associated Press. "It won't impact us from near and far. Ideas won't be impacted by false accusations. We uphold this call only for the sake of God."

The declaration, he said, means that those who "participate in the group's activities, in the organization or promotion verbally or by writing or by any other means or financing its activities" will be facing punishment according to the law. He said that the government had notified other Arab countries about its decision. The Brotherhood has organizations and political parties in other nations in the region.

Ahmed el-Borai, the Minister of Social Solidarity, told reporters in a news conference that the decision means "all activities of the Muslim Brotherhood group are -- banned including the demonstrations."

The declaration gives the armed forces and the police the right to enter universities and prevent protests, as "protection to the students," el-Borai said.