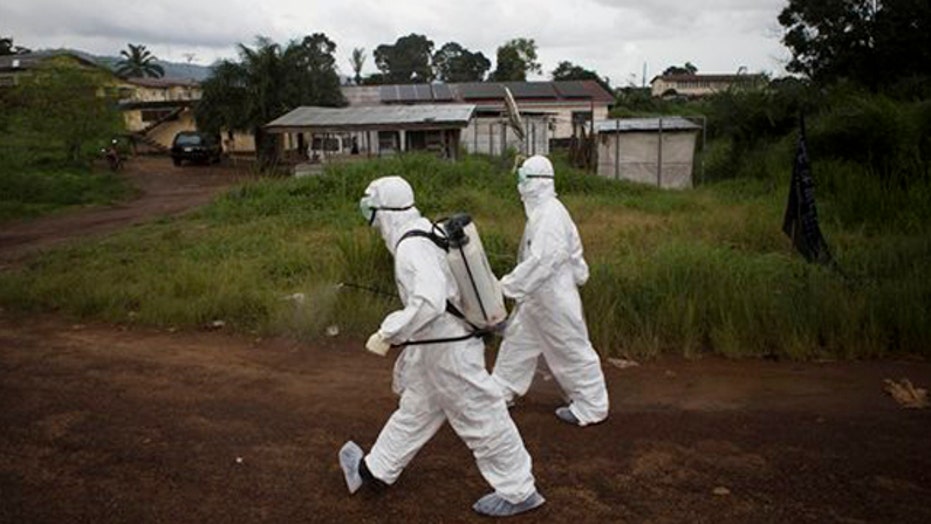 Can outbreak be contained?

Doctors are in short supply and countries are scrambling to find more resources for the Ebola outbreak, as the death toll from the virus hit 3,000.

According to a Wall Street Journal report Sunday, the World Health Organization said 3,091 people have died of confirmed, suspected or probable cases of Ebola.

Even as countries try to marshal more resources, those needs threaten to become much greater, and possibly even insurmountable.

Fourteen-year-old D.J. Mulbah was taken by his mother and grandmother on Saturday in desperate pursuit of a coveted bed at the Ebola clinic run by Doctors Without Borders in Monrovia, Liberia's capital. Too weak to stand, he was put into a taxi with his backpack and a bucket for vomit. Now he lay on the dirt beside the worried women.

"He's been sick for a week with a runny stomach," said his mother, wiping the sweat off the boy's brow with her bare hands. "We tried calling an ambulance days ago but nobody ever came."

Beds are filling up as fast as clinics can be built. Ambulance sirens blare through standstill traffic. Often there is nowhere to take the sick except to "holding centers" where they await a bed at an Ebola treatment facility.

By 8 a.m. a dozen people who likely have Ebola are crouching and sitting on the ground outside the padlocked metal gates of a facility with a capacity of 160 patients. Soon a triage nurse approaches, her voice muffled through a surgical mask covered by a plastic face shield. The clinic will take the boy. D.J. manages a faint smile. Seven of the 30 beds made available Saturday morning were vacated by survivors. The rest had died.

Statistics reviewed by The Associated Press and interviews with experts and those on the scene of one of the worst health disasters in modern history show how great the needs are and how little the world has done in response. Some foreign medical workers have bravely fought on, a few even contracting Ebola themselves as they cared for patients. Experts warn that the window of opportunity to snuff out the dreaded disease may close unless promises of additional assistance immediately become reality.

The existing bed capacity for Ebola patients in Liberia, Sierra Leone and Guinea and Nigeria is about 820, well short of the 2,900 beds that are currently needed, according to the World Health Organization. Recently 737 beds were pledged by countries. Yet even after the promised treatment facilities are built, they will still be at least 2,100 beds short.

The shortage of health workers is also great. WHO has estimated that 1,000 to 2,000 international health workers are needed in West Africa. More than local 200 health workers have died of Ebola trying to save patients, complicating recruitment efforts.

Doctors Without Borders, which has more Ebola clinics than anyone, currently has 248 foreign aid workers in the region.

President Barack Obama has ordered up to 3,000 U.S. military personnel to West Africa to train health workers and build more than a dozen 100-bed field hospitals, including reserved sections for infected aid workers in Liberia.

Among other promises of global assistance:

-- The African Union has said it will deploy 100 health workers to assist the West African countries affected by Ebola. The first batch of an AU Ebola taskforce, totaling 30 people, left for Liberia on Sept. 18. Taskforce members are expected to arrive in Sierra Leone on Oct. 5 and in Guinea by the end of October.

-- Britain and France have both pledged to build field hospitals in Sierra Leone and Guinea.

-- China is sending a 59-person lab team to Sierra Leone.

-- Cuba will send 461 health workers, who will be trained in biosecurity, and some will go to Liberia and Guinea.

"The reality on the ground today is this: The promised surge has not yet delivered," she said.

MSF and other aid workers are distributing home-care kits with gloves and surgical gowns to try and keep those awaiting hospital beds from infecting relatives at home, though only thousands of kits are being distributed in Monrovia, a city of 1.6 million.

"We have been working furiously trying to set up treatment centers but (incoming patients) have been outpacing our ability to set them up," said Dr. Frank Mahoney, co-lead of the U.S. Centers for Disease Control team in Liberia.

Unless the situation is put under control, the outbreak may infect as many as 1.4 million people by the end of the year and nearly half of those people could die, the CDC estimated this week.

If more people get sick than those who recover or die, the needs will grow even more pronounced.

"If this outbreak continues, the sheer caseload will make it much more difficult to contain," said Dr. Bruce Aylward, assistant-director general in charge of emergencies at WHO. "We will need more health workers to take care of them, more PPE (protective suits), more hospitals, more of everything."

A top priority is sending enough protective equipment, including gloves, gowns, masks and boots. WHO is shipping about 240,000 protective suits a month in addition to supplies sent by other agencies. Under-sourced clinics are reportedly washing and reusing protective gear that is meant to be worn once and burned.

"We still do have gaps in the supply, which are quite significant," said Antonio Vigilante, the Deputy Special Representative of the U.N. Secretary-General in Liberia. "Nobody expected that the requirements of protective gear would go in the order of millions." Liberia now requires an estimated 1.3 million protective suits, Vigilante said.

One of the world's top makers of the suits, DuPont, says it has more than doubled production but would not say who has placed orders. Officials are also looking into whether protective clothing can be locally produced.

"The situation on the ground is just disastrous," said Dr. Heinz Feldmann, chief of virology at the U.S. National Institute of Allergy and Infectious Diseases, who recently returned from Liberia.

"The idea of having hundreds of people in tent structures for Ebola management is unbelievable but the way this is spreading, we need to find a solution now."