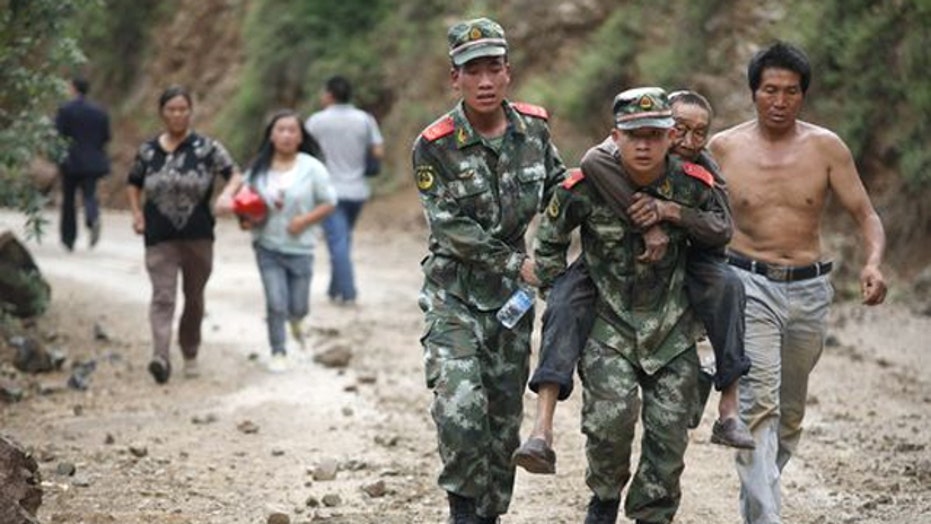 Desperate search for survivors after earthquake in China

BEIJING – Rescuers dug through shattered homes Monday looking for survivors of a strong earthquake in southern China as the death toll rose to at least 398 people, with more than 1,800 injured. Rainstorms were expected to hinder rescue efforts over the coming days.

About 12,000 homes collapsed when the quake struck Sunday afternoon in impoverished Ludian county, around 230 miles northeast of Yunnan province's capital, Kunming, the official Xinhua News Agency reported. It said about 230,000 people had been evacuated.

Ma Yaoqi, an 18-year-old volunteer in the quake zone, said by phone that at least half of the buildings had collapsed on the road from the city center of Zhaotong to the hardest-hit town of Longtou. The rest of the buildings were damaged, she said.

"I saw dead bodies being wrapped in quilts and carried away," said Ma, who arrived with 20 other volunteers Monday. "Some were wrapped with small quilts. Those must be kids."

The magnitude-6.1 quake struck at 4:30 p.m. on Sunday at a depth of 6 miles, according to the U.S. Geological Survey. China's earthquake monitoring agency put the magnitude at 6.5.

The central government has allocated $97 million for rescue and relief work after the quake, the Finance Ministry said.

Dozens of trucks carrying paramilitary troops with banners declaring "Help is on the way" traveled along the four-lane highway from Kunming to Zhaotong on Monday evening.

Heavy rain and thunderstorms in the area were complicating efforts to bring tents, water, food and other relief supplies to survivors. Roads had caved in, and rescuers were forced to travel on foot.

The national meteorological center said the area near the center of the quake would suffer thundershowers over the next three days.

Repeated aftershocks also were making the rescue work dangerous. The USGS showed four aftershocks of magnitude 4.5 and higher hitting after the initial quake.

The Yunnan Civil Affairs Bureau said on its website that 398 people were killed and 1,801 injured. The death toll is expected to rise after rescuers reach remote communities to assess casualties.

Many of the homes that collapsed in Ludian, which has a population of about 429,000, were old and made of brick, Xinhua said, adding that electricity and telecommunications were cut off in the county.

The mountainous region where the quake occurred is largely agricultural, with farming and mining the top industries, and is prone to earthquakes.

In May 2008, a powerful quake in Sichuan province left nearly 90,000 people dead or missing.