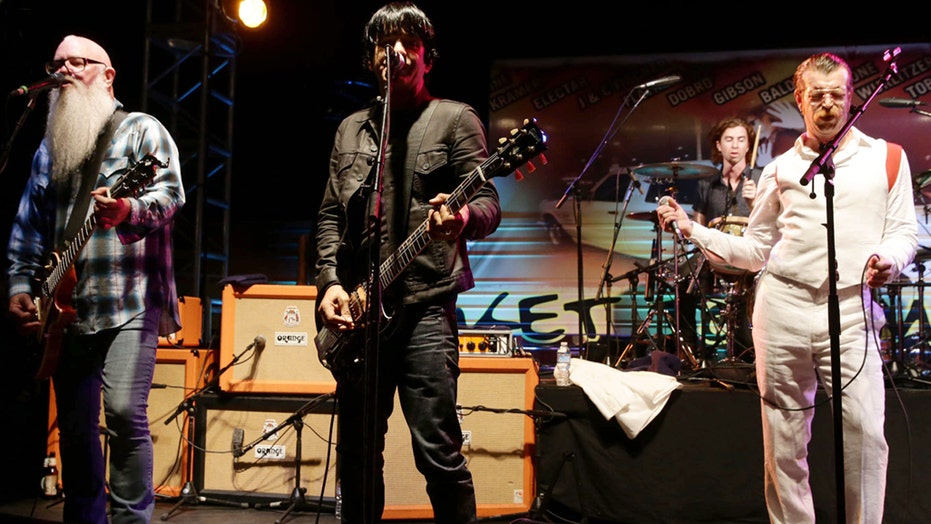 Push to get Eagles of Death Metal song to No. 1

Fox 411: Eagles of Death Metal fans want ‘Save a Prayer’ to top charts as tribute to those murdered at concert

PARIS – Members of the California rock band Eagles of Death Metal have made a surprise return to a Paris stage during a concert by U2, less than a month after suicide bombers stormed the band's Nov. 13 gig at the Bataclan theater and killed 89 people.

U2 on Monday night was playing the last of four concerts in Paris. The last two shows had been postponed when France announced a state of emergency following the attacks that killed 130 people.

It was the first time the Eagles of Death Metal band had performed since the attacks, which band members escaped under harrowing circumstances. The band, though deeply shaken, has said it wanted to play again in Paris.

Just before the band emerged Monday night, U2 frontman Bono said there was "nothing left except to introduce you to some people whose lives will forever be a part of this city of Paris. These are our brothers. Our fellow troubadours. They were robbed of their stage three weeks ago, and we would like to offer them ours tonight. Would you welcome the Eagles of Death Metal!"

The bands then played the U2 song "People have the power."

The Eagles of Death Metal singer then said, "We love you too, so much for giving us this opportunity. I look around and what do I see, nos amis, our friends. I f---ing love you guys so hard, and I will never stop rocking and rolling."