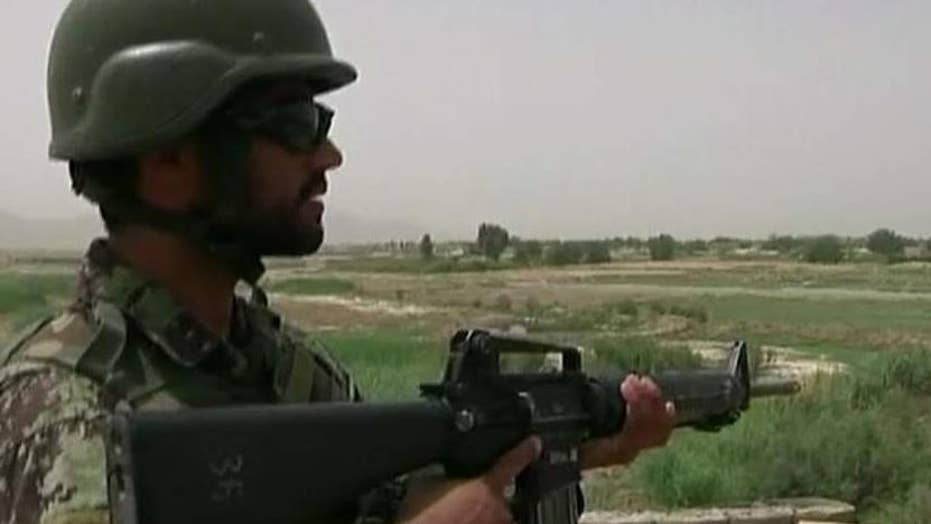 Dozens of Afghan troops training in the US go AWOL

The number of Afghan trainees who have disappeared while traveling in the United States more than doubled last year, according to the latest Special Inspector General for Afghanistan Reconstruction (SIGAR) Quarterly Report released to Congress this week.

More than half are unaccounted for, the report says.

A prominent portion of the report was dedicated to discussing the increasing number of Afghan security personnel going AWOL while training in the United States. Of the 320 foreign military trainees that went AWOL since 2005 while in the U.S, almost half – 152 – hailed from Afghanistan. About 83 of those Afghanis remain unaccounted for.

“We found that the increasing instances of AWOL since 2015 may have had a negative impact on operational readiness of Afghan Defense and Security Forces (ANDSF) units and the morale of fellow trainees and home units, as posed security risks to the United States,” the report states.

The revelations come at a time when the U.S is upping its troop numbers in an effort to try and reverse the deteriorating security situation in the war-embattled nation, in which the Afghan government’s district and population control has declined to its lowest levels in years and armed clashes inside the country are at an all-time high, as reported by the United Nations.

Since 2001, the U.S. has sought to “promote a stable and prosperous Afghanistan,” with a considerable goal in reconstruction efforts through training their armed forces. In July of this year, Congress appropriated a further $68.27 billion to the Department of Defense (DOD) to train and equip the ANDSF. As part of this mission, the U.S government sponsors numerous military training programs – including an Aviation Leadership Program, Regional Defense Combating Terrorism Fellowship Program and a Counter-Drug Training Program – inside the U.S.

Inside the Ministry of Defense (MOD) in the heart of Kabul, Afghanistan (Hollie McKay/Fox News)

This overall figure represents about 6 percent of all Afghans who received U.S-based training, while only 0.07 percent of trainees from other countries went AWOL. But the Afghan trainee problem is on the uptick – last year, the percentage of Afghan trainees who disappeared doubled from the “historical average of 6 to 7 percent to 13 percent.”

Trainees had gone AWOL from 23 different locations across the country and 103 of the 152 were of the rank of lieutenant or captain.

GETTING TOUGH ON THE TALIBAN: TRUMP ADMIN SAID TO BE URGING CLOSURE OF THE MILITANT GROUP'S QATAR OFFICE

The reasons cited by the Afghans who were previously documented as having been AWOL, centered on personal/family safety matters and concerns over job security.

For example, one female claimed that after she departed Afghanistan the Taliban threatened her family because of her U.S. association, while another trainee expressed concern that he expected not to have a job upon return to his home country as many others were able to pay bribes and thus fill the employment allotments.

The uptick in AWOL Afghan trainees in the U.S coincides with the increase in violence inside war-embattled Afghanistan (Associated Press)

However, the issue of AWOL trainees – which takes place when a visiting trainee does not show up at scheduled activities without prior permission for more than 24 hours – is hardly new. A Fox News exclusive back in 2010 exposed the fact that 17 Afghan military men had defected from an Air Force Base in Texas alone, while a further 46 members of the Afghan military had walked away from the Defense Language Institute’s English Language Center.

“ANDSF trainees who go AWOL while training in the United States cost the U.S. government millions of dollars in cancelled course and per diem costs, while wasting training opportunities that could have gone to other students,” the Commander of the Combined Security Transition Command – Afghanistan (CSTC-A) said last year.

In response, the CSTC-A rescinded several slots for trainee courses slated for 2017, but SIGAR contends that more needs to be done to combat the rising problem.

Both U.S and Afghan Forces participated in the dropping of the "Mother of All Bombs" (MOAB) in ISIS hideouts in Afghanistan earlier this year. (Associated Press)

SIGAR urges more stringent monitoring measures be put in place, suggesting that the Department of Defense (DOD) mentors in Afghanistan work closely with the Ministry of Defense (MOD) and Ministry of Interior (MOI) in Kabul to develop processes and procedures.

The report also indicated that there needs to be an improvement in coordination between U.S Citizenship and Immigration Services (USCIS) and U.S. Immigration and Customs Enforcement (ICE) to help prevent AWOL trainees who may pose a national security threat.

“Although the United States and Afghan governments have established processes for selecting and vetting ANDSF personnel for training, these processes appear flawed,” the report concluded.