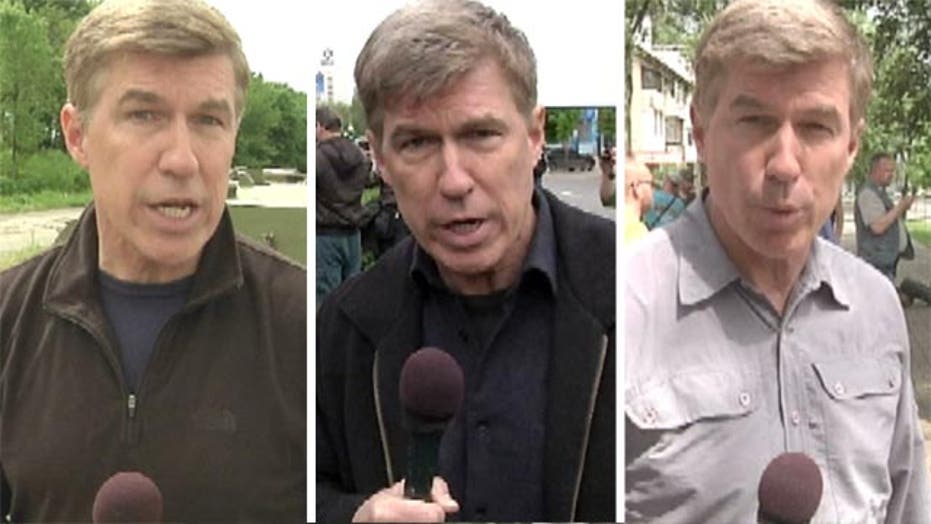 A compilation of reports from Donetsk

Fox News Channel's Greg Palkot spent the last month in Donetsk, Ukraine, where fighting between the military and pro-Russian insurgents following Moscow's annexing of Crimea threatens to destabilize the nation's eastern region. Below is his first-hand account of the struggle for control of the deadly struggle for control of eastern Ukraine.

Four weeks in Donetsk. It has been a crazy series of events: Threats from masked armed men at checkpoints…Shells landing near us…Russian slogans shouted at rallies…Locals struggling to make sense of it all.

It is a cliché to say things are spiraling out of control, but they could be.

The accompanying video shows the ups and downs, the twists and turns of this crisis.

A lot of violence, guns, barricades and bloodshed.

Book-ended by a referendum held by pro-Russia separatists claiming to show a desire of the people to split from Kiev…to a presidential election that went well everywhere in Ukraine except in the east, where only the brave voted.

Political complaints about too much corruption and not enough democracy shifted into a violent struggle.

In the beginning, the focus was on 40,000 Russian troops outside of the border. Now it is on an army of Russian fighters within. Saying they speak for the people…With AK-47s that rattle through the night.

We asked one woman why she was risking her life to prepare ballots for a national election targeted by those in charge now.

“Because we are patriots,” she replied. That spirit could be put to the test in the coming weeks…on all sides.