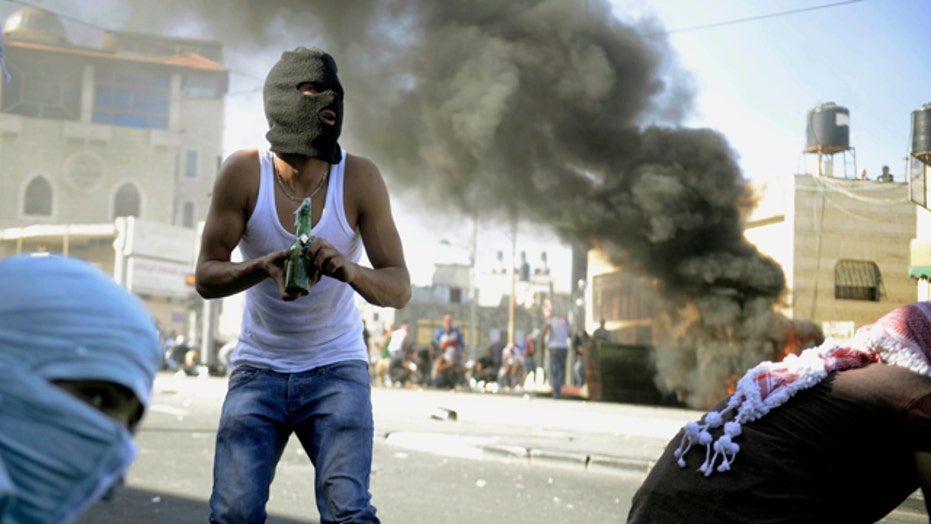 Palestinians clash with Israeli police after body is found

Former Israeli Ambassador to the U.N. Dan Gillerman breaks down tensions with Hamas

A Palestinian teen was abducted and killed Wednesday, Palestinians said, accusing Israeli settlers of conducting a revenge attack for the deaths of three Israeli youths.

The discovery of the teen’s body sparked clashes between Palestinians and authorities.

Just hours after Israel buried the three teens, relatives of Mohammed Abu Khdeir said the 17-year-old was forced into a car in a neighborhood of east Jerusalem before it sped off. A burned body was found shortly afterward in a Jerusalem forest.

Later Wednesday, Abu Khdeir's family said it had identified the body. The teen's cousin, Saed Abu Khdeir, said the family believed the youth was killed by Israelis in an act of revenge.

"It's a clear crime by settlers in revenge for the killing of the three," he said. Abu Khdeir said the family witnessed security camera footage of the suspected kidnapping, which purported to show a car nearing Mohammed Abu Khdeir and taking him away.

In a statement, Secretary of State John Kerry called the killing "sickening" and said "there are no words to convey adequately our condolences to the Palestinian people."

But Israeli officials urged calm as police investigated the incidents, hoping to contain the violence.

"Everything is being examined. There are many possibilities. There is a criminal possibility as well as a political one," Israel's public security minister, Yitzhak Aharonovitch, told Israel Radio. "I am telling everyone, let us wait patiently."

Israeli Police Spokesman Micky Rosenfeld said authorities are also looking into previous kidnap attempts of members of the family to which the teen belonged.

“It is possible this is a personal or family-related incident,” he told the Jerusalem Post. “We are not ruling anything out.”

Prime Minister Benjamin Netanyahu urged authorities to swiftly investigate the "reprehensible murder" and called on all sides "not to take the law into their own hands."

In Washington, the Obama administration denounced the killing as a "heinous murder" and called for the perpetrators to be brought to justice.

"There are no words to convey adequately our condolences to the Palestinian people," said Secretary of State John Kerry, calling the killing "sickening."

U.N. Secretary-General Ban Ki-moon also called for the perpetrators of the "despicable act" to be promptly brought to justice.

In a statement, the European Union condemned the killing "in the strongest terms" and welcomed Israel's pledge to investigate. It urged all parties to show "maximum restraint."

As news of the youth's disappearance spread, hundreds of Palestinians in east Jerusalem torched light rail train stations and hurled stones at Israeli police, who responded with tear gas and stun grenades.

Rosenfeld said security was heightened in Jerusalem, with extra units dispatched and the city's light rail train service cut short to avoid the scene of the violence. Significant damage was reported to three light rail stations and rioting ensued in Shuafat and Beit Hanina.

Police closed a key holy site in Jerusalem's Old City to visitors after rock throwing there.

At midafternoon, masked men holed up in a mosque in the east Jerusalem neighborhood of Beit Hanina lobbed rocks toward Israeli security forces in the street below. Police responded by firing stun grenades toward the mosque, as a small group of Palestinian youths stood to the side.

The street was largely deserted and littered with rocks and debris, as a small fire set next to a large green trash bin spewed black smoke into the air. There were no reports of injuries.

Rosenfeld said police received a report early Wednesday that an Arab teen was "forcibly pulled into a vehicle" in an area of east Jerusalem and that an hour later a body was discovered in a separate part of the city.

The discovery comes after several hundred right-wing Israeli youths marched through Jerusalem on Tuesday, demanding revenge for the murders of Eyal Yifrah, 19, Gilad Shaar, 16, and Naftali Fraenkel, 16, the three Jewish seminary students who disappeared last month and whose bodies were found Monday in a field near the West Bank city of Hebron.

Five Palestinians were attacked, two of whom required medical treatment, and 50 people were arrested after violent confrontations with police that lasted several hours in the capital's center.

Israel has accused Hamas of abducting and killing the three teens, and has arrested hundreds of its members across the West Bank. Rocket fire from the Hamas-controlled Gaza Strip has meanwhile intensified, and been met with Israeli air strikes.

On Wednesday evening, the Israel Air Force (IDF) struck a mortar launcher in the Gaza strip that was being used to fire at southern Israel, the Jerusalem Post reported.

The IDF’s Iron Dome rocket defense system also intercepted a rocket fired from the Gaza Strip that was passing over the city of Asheklon.

The three young men were buried side by side Tuesday in the central Israeli town of Modiin. Thousands of mourners arrived in large convoys of buses arranged for the ceremony.