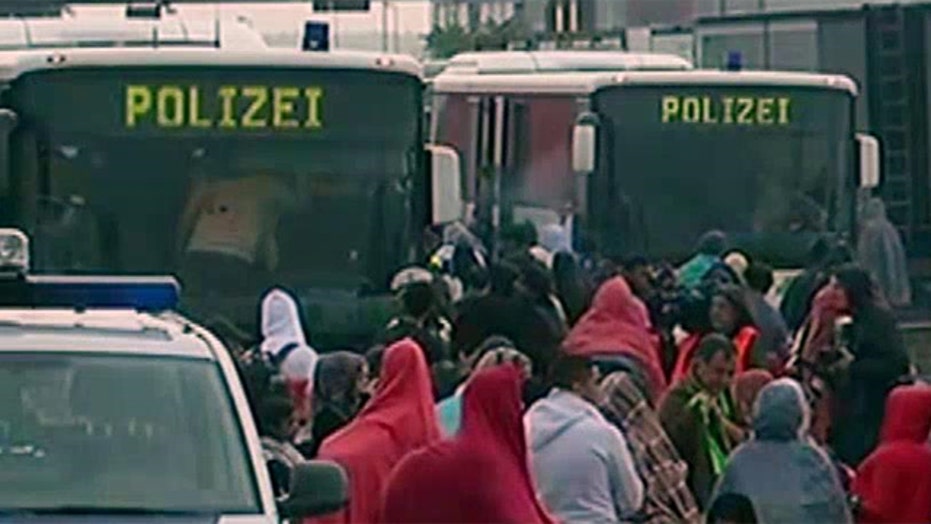 A first endeavor to cross the border by car was unsuccessful: Russian drivers no longer take refugees into Norway since it threatened to prosecute them for people trafficking. After learning he wouldn't be allowed to walk through the checkpoint at Storskog, some 250 miles north of the Arctic Circle, the Syrian teacher from Hamah bought a bike for $150 and cycled a 20-mile stretch of gravel road to the border.

"I had my laptop on my chest and a bag on my back," he said at the Refstad refugee shelter in Oslo. "I was wearing two jackets and two sets of underwear under my pants. North is cold."

The teacher's Arctic path illustrates the extraordinary scope of Europe's migration crisis, as the continent grapples with the biggest groundswell of asylum seekers since World War II.

As more European countries erect walls and deploy barbed-wire fences in a bid to stop the irrepressible flow, the circuitous northern route via Russia has emerged as a safer option than the often deadly passage thousands undertake packed into ships across the Mediterranean Sea or into trucks across Eastern Europe.

VIDEO: Is US turning blind eye to refugee crisis

Though 2,300 miles north of Syria and often freezing cold, the border between Russia and Norway is an attractive alternate route, providing a direct gateway into the Schengen Area, within which there are no border controls. Although Norway isn’t a European Union member, it is part of the visa-free zone.

The more than 150 migrants recorded at Norway's Storskog border post so far this year represent a fraction of the estimated half-million people who have applied for asylum in Europe during the period. But Norwegian authorities say the Arctic flow is growing fast as Syrians and other migrants appear to be sharing the tip.

"Some have discovered a fast track to Europe," said Hans Møllebakken, chief of the police station guarding the Norwegian side of the border with Russia.

The teacher's travel diary and those of other Syrian refugees who have come through Russia to Norway suggest the Arctic route is also fast and cheap, compared with the more commonly used southern paths.

The teacher, who traveled alone, said the trip cost him $2,400, including $250 for the Russian visa and $1,600 for a plane ticket from Beirut to Moscow. Mohammed Al-Salim, a 20-year-old Syrian who arrived in Oslo on Friday , said he spent $2,500 and completed the trip in three days.

Migrants who have reached Northern Europe via Greece or Italy, sometimes using fake passports, cite costs of $12,000, including as much as $2,500 just for crossing to the Greek islands from Turkey.

In Oslo, Syrian refugees said they planned their trips themselves, relying on relatives and friends to collect the necessary funds and arrange some hotel reservations along the way.

Al-Salim, who also had to cycle through the Norwegian checkpoint, said he got the idea to travel via Russia at the start of the year, when he was with his brother in Tartus, a coastal town in Syria.

"There was a power outage," he said. "I had nothing but a world map to look at."

"I believe I was among the first Syrians to travel this route," he said.