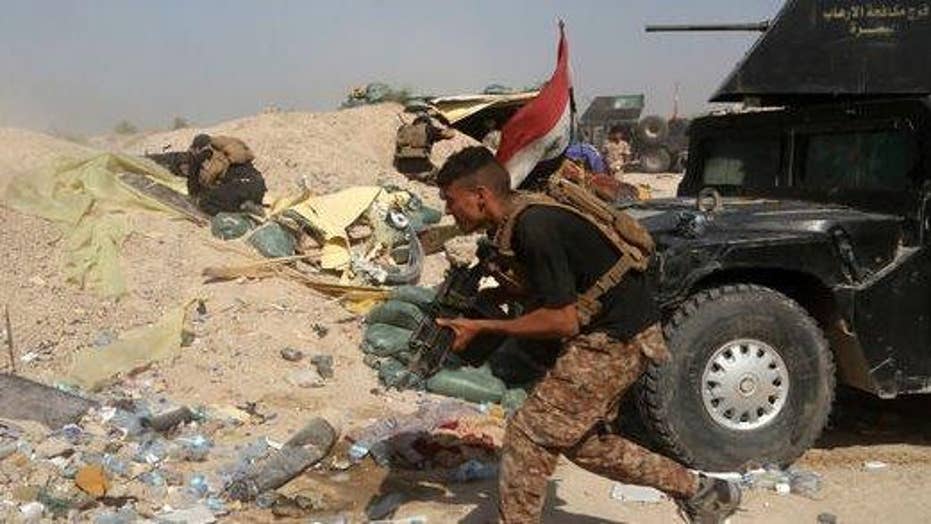 ISIS fighters desperately clinging to the embattled city of Fallujah in the face of an overwhelming liberation force are literally stealing blood from civilians to heal their wounded, witnesses told FoxNews.com.

Reeling from a months-long siege and facing a force of 20,000 Iraqi government troops, Iranian-supported militia and a civilian population sensing pending freedom, the black-clad occupiers of the city some 40 miles west of Baghdad have resorted to the unthinkable. ISIS fighters are accosting people on the street and in their homes, forcing them to give blood for wounded fighters and leaving some drained and dying in the streets, a witness inside the city told FoxNews.com.

Iraqi forces are trying not to exacerbate a burgeoning humanitarian crisis. (Special to FoxNews.com)

“ISIS now have a large number of wounded fighters and is desperate for blood,” the Iraqi source said. “Many of the civilians couldn’t get even two meals a day for a long time, so they’re very ill and weak.”

Iraqi forces are trying to retake the city without destroying it or worsening a burgeoning humanitarian crisis, according to military officials. Their effort to free the city neighborhood-by-neighborhood and even door-to-door also is being slowed by the dug-in terrorist army dwindling firepower.

“ISIS is using a lot of snipers and plenty of IEDs,” Capt. Omar Nazar, head of an elite unit in the Iraqi Emergency Response Division, told FoxNews.com. “They have booby-trapped a lot of homes and they are moving civilians around to use them as human shields.”

The battle for Fallujah is strategic as well as symbolic. After Mosul, Fallujah is Islamic State’s key stronghold in Iraq, and the city of 300,000 was the scene of some of the bloodiest urban combat with U.S. forces in 2004. ISIS took control of it two years ago.

The operation on the ground is being executed by various security divisions, including Iranian-supported militias, Iraqi Army forces, Iraqi federal police and Sunni police forces from Fallujah who are being primed to hold the city once ISIS is defeated, along with U.S.-led coalition airstrikes from above.

Several residents have died fleeing Fallujah on boats and rafts, in a dangerous crossing of the Euphrates. (FoxNews.com)

Government forces, backed by U.S. airstrikes, have smashed through three ISIS perimeters, taken control of the city’s main hospital and a key bridge across the Euphrates and killed regional ISIS commander Abu Amir Ansari. The closer Iraqi forces get to liberating the city, the more desperate the black-clad terrorist army now under siege becomes.

As the liberating forces gingerly move in, ISIS is scrambling to repel them with car bombs, snipers and artillery, and stocking the front line with foreign fighters, according to military officials.

The battle is considered a test for the looming, and likely bloodier battle to retake Mosul, the country’s second-largest city. The forces have successfully taken back other large cities such as Ramadi – the capital of Anbar Province – late last year, but most of the city was razed to the ground in the operation.

Ali Abd Al Hassan, a member of the Iraqi Special Operations Golden Brigade, said that the approach this time is vastly different.

“The operation is to liberate Fallujah, not destroy it,” he said, adding they are attempting to secure safe lanes for people to flee and intend on dropping leaflets from the air to inform people on what directions they can go before any military activity takes place.

The United Nations estimates that as many as 90,000 civilians could still be trapped inside the volatile city. Several have died in their attempts to escape, including some who drowned in makeshift rafts trying to cross the Euphrates.

Human rights groups have raised deep concern for the absconding residents not only under the threat of ISIS, but concern that the mostly Sunni residents have and will suffer at the hand of Shia militias in revenge attacks.

“We are committed to the human rights treaties and agreements, we conduct our operations as far away as possible from residential areas,” an authorized official with the Saraya Al Ashura popular mobilization unit, which is operating alongside the Iraqi Army to victoriously reclaim a number of Fallujah-surrounding villages. “We are not interacting with the civilian population and only fighting in close combat against ISIS so we don’t have to use our rockets, which could cause severe damage to them.”