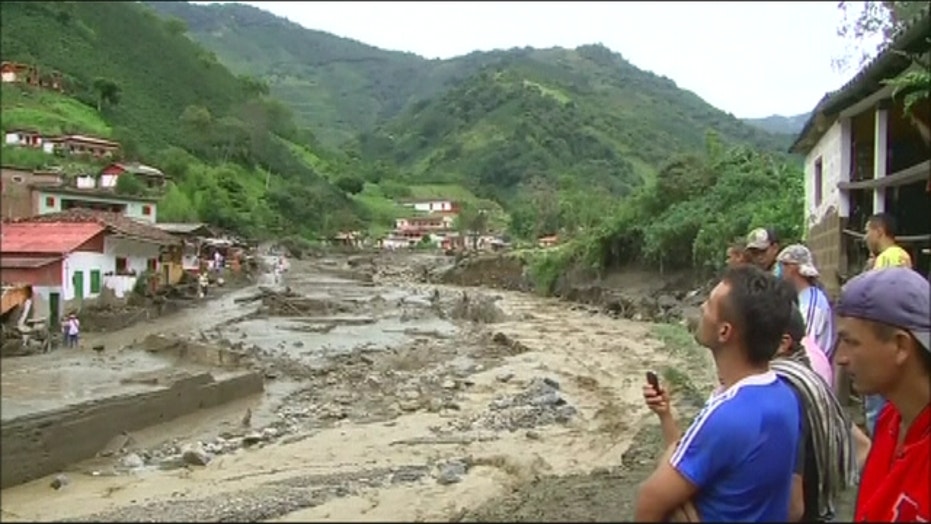 Colombian President Juan Manuel Santos on Monday declared a "public emergency" in the town of Salgar, in Colombia's northwestern province of Antioquia, after an avalanche of mud and debris roared through the Andean town before dawn Monday, killing at least 58 people, injuring dozens more and leaving hundreds homeless.

An undetermined number of people are still missing.

Firefighting units have been dispatched to the scene from nearby municipalities to scour through the ruins of the town for the missing, according to the National Risk and Disaster Management Unit, or UNGRD.

Survivors recalled being stirred from their beds by a loud rumble and neighbors' shouts, barely having enough time to gather their loved ones as modestly built homes and bridges plunged into the Libordiana river.

"The river took out everything in its path," said construction worker Diego Agudelo, adding that the back part of his home was lost.

Dozens of rescuers supported by Black Hawk helicopters on Monday evacuated residents near the ravine for fear of another mudslide. A red fire truck could be seen hauling away several bodies, their bare feet dangling from an open trunk.

President Juan Manuel Santos, who traveled to the town to oversee relief efforts, said several children lost their parents and the bodies of those killed needed to be transported to Medellín for identification. He vowed to rebuild the lost homes and provide shelter and assistance for the estimated 500 people affected by the calamity.

"Nobody can bring back the dead ... but we have to handle this disaster as best we can to move forward," Santos told reporters.

"The first thing that was done was to declare a public calamity to be able to have the flexibility to use those resources where they are most needed," he said.

Santos also said that the state will pay the families of each deceased person 16 million pesos (about $6,500).

By Monday evening, Carlos Ivan Marquez, head of the National Disasters Unit, said 58 people had been killed and 37 injured.

The flooding destroyed the town's aqueduct and even areas in less hazardous zones experienced flooding. Authorities provided water, food supplies and blankets to help residents cope with what they described as a humanitarian emergency.

Colombia's rugged topography, in a seismically active area at the northern edge of the Andes, combined with shoddy construction practices, has made the country one of Latin America's most disaster-prone. More than 150 disasters have struck the country over the past 40 years, claiming more than 32,000 lives and affecting more than 12 million people, according to the Inter-American Development Bank.

The tragedy in Salgar appeared to be the single deadliest event since a 1999 earthquake in the city of Armenia that left hundreds dead. A wave of flooding during the 2011 rainy season left more than 100 dead.

Luz María Urrego, 74, said she escaped certain death because she had traveled to Medellín for the long holiday weekend. She said her brother was killed along with his children and grandchildren.

"I said to my wife 'let's hold each and hope that God saves us,'" said Jorge Quintero, a local resident, describing to RCN TV how he was trapped between two raging currents that had taken with it two homes on either side of his own. "I know God gave us his hand because here we are, alive, still frightened, but alive."

Based on reporting by the Associated Press; EFE contributed to this report.