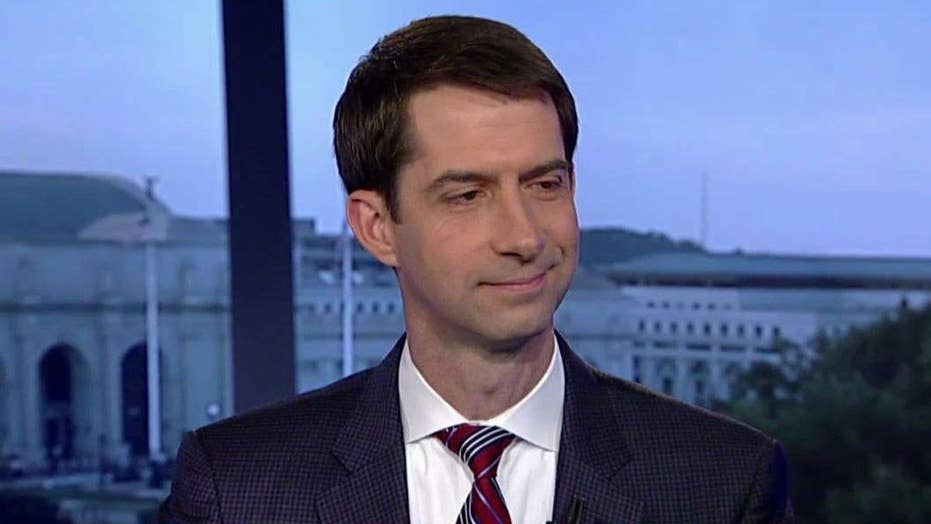 Sen. Tom Cotton on how Trump can undo the Iran deal

RAWANDIZ, Iraq – It would be idyllic if it wasn't so dangerous.

Fog swirls over the snow-dusted mountain range as the sunlight fades and the late fall cold settles on this rugged portion of a war-torn country reached only by a single, curling road. With the sprawling Iranian countryside as a distant backdrop, a dozen men trek up the steep mountain path, hunched under the weight of rucksacks laden food, electronics and the most coveted Iranian-bound cargo of all: alcohol.

"Other things are okay to smuggle during the day," one local operative said. "But alcohol? Only in the dead of the night."

Hundreds of men, on foot and on horseback, haul the contraband booze into Iran, risking their lives in the process. (FoxNews.com)

One smuggler estimates that 15 men die each month at this very peak, felled by gunfire from an Iranian border patrol tower that looms above, landmines left over from the bloody 1980s war between Iran and Iraq or the harsh elements. The men are traversing one of more than 20 bootleg routes that straddle the border, and they make their deadly jaunt at night.

On foot or horseback, hundreds of men meet Kurdish suppliers on the road below, picking up liquor that arrives in the beds of pickup trucks, just before the Iranian border stations and in full view of an enormous checkpoint portrait of Supreme Leader Ayatollah Khamenei.

Smugglers, mostly poor farmers from both sides of the border, typically make around $60 per trip, which takes about six hours from pick-up to drop-off. Their suppliers make far more for their role in defying Tehran’s hard line on booze.

The demand for alcohol inside Iran has risen steadily since it was outlawed following the 1979 Revolution. Consumption is deemed a "crime against God," and is punishable with lashes or even execution for multiple offenses.

Most of the alcohol smuggled in is purchased in bulk from Armenia. Absolut vodka, Johnnie Walker scotch and counterfeit Grey Goose are among the popular labels. By the time it makes it through Kurdish territory and into the Islamic Republic, the price has tripled.

Trucks like this one bring the alcohol to the men who complete the trip on foot. (FoxNews.com)

The nuclear inspection deal that lifted sanctions on Iran and pumped billions of dollars into its economy had no effect on the price of illicit liquor, one smuggler told FoxNews.com.

"The rate remains steady," he said. "After all, we all know it is not the people of Iran that are getting that money to spend."

Smugglers are not the only source of alcohol for Iranians. Illicit breweries and makeshift stills bubble inside Iranian homes, feeding an addiction second only to opiates. In recent years, Iranian authorities have begrudgingly acknowledged the growing problem, and in 2013 opened Iran's first and only detox center in Tehran.

Soon, the alcohol destined for Iran may have to be smuggled in to Iraq, as well. Late last month, Iraq’s Parliament approved a bill to ban alcohol. It's not yet clear when the ban might take effect, or if it will even survive a Supreme Court challenge, but many critics see it as an ominous reflection of Iran’s influence on its neighbor. They predict a ban will lead to the same black market that now quenches Iran’s thirst for alcohol.

"For decades, Iran has wanted to control Iraq and this is their opportunity to bring more conservative Islamic values into Iraq and shape it into its own second Shiite Iran," said Juliana Tamoorazi, the founder of U.S.-based Iraqi Christian Relief Council, an Assyrian who fled Iran as a refugee after the revolution.

"A bi-product of this legislation is the further marginalization of persecuted minorities, it appears laws like this want to push minorities out of the country."

Khalid Rumi, a member of Iraqi Parliament and a leader of the nation’s embattled Mandaen religious community, said decrees such as the alcohol prohibition "choke minorities and force them to leave," but are an even more sinister threat.

"This isn't just about suppressing minorities, it is about targeting personal freedoms for everybody,” Rumi said. “The danger isn't only banning alcohol, there is a bigger goal to target more personal freedoms.”

Many Iraqis who spoke to FoxNews.com said they won’t part willingly with alcohol or any of the personal freedoms they now enjoy. If a ban is passed, the smuggling route will begin at Iraq’s own border and lead into the war-torn nation.

"To pass this law is one of the most stupid decisions ever made," said 29-year-old Baghdad-based financial expert and author Rusly Almaleky.