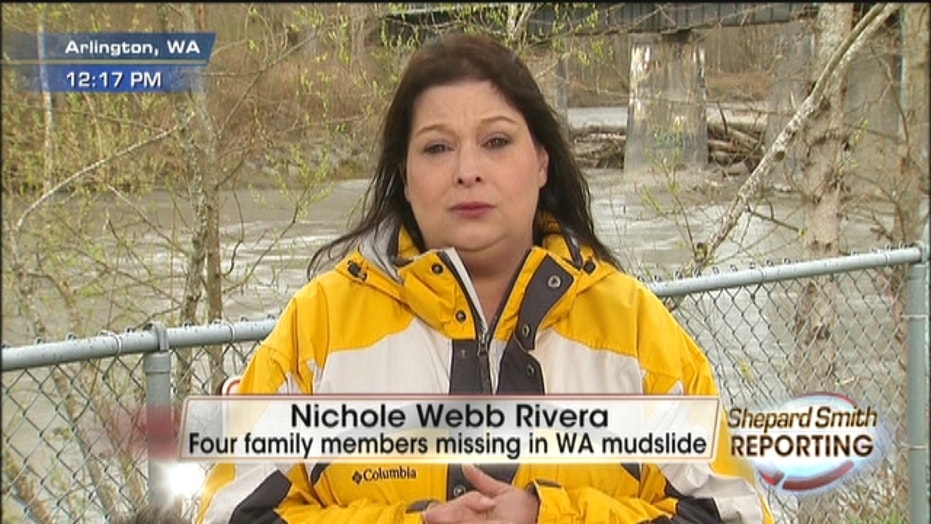 Nichole Webb Rivera has had no official confirmation from authorities. But when she saw an aerial photograph of Saturday's landslide, she knew her parents, didn't make it out.

SEATTLE (AP) – When a massive hillside collapsed in Washington state over the weekend, Nichole Webb Rivera frantically texted her two adult sons, her daughter and her daughter's fiance in the area to make sure they were OK.

She heard back from her sons, but nothing from the other two. And no one has been able to reach Rivera's parents, who live in a house along the Stillaguamish River, smack in the middle of where the milewide slide came crashing down.

Relatives called around, but the somber reality soon set in. "We've lost four," said Rivera, who grew up in Darrington, a logging town of about 1,400 people just to the east of the landslide.

Rivera has had no official confirmation from authorities. But when she saw an aerial photograph of Saturday's landslide, she knew her parents, Thom and Marcy Satterlee, didn't make it out.

Her daughter, 20-year-old Delaney Webb, and Webb's fiance were visiting the older couple from Everett at the time, and they likely died too, Rivera said.

"It sounds terribly morbid, but looking at it, I'm resigned," said Rivera, 39, who lives in Houston but flew to Seattle on Sunday night and drove to the slide area Monday.

"How could anyone survive? Their house was dead center of where that mountain came down. Where you see debris ... they were in the middle of that neighborhood."

Webb, who was studying at Everett Community College, was preparing to get married in August at her grandparents' scenic riverfront home.

"They were planning a beautiful outdoor wedding. They were happy and in love," Rivera said. "She was the sweetest. (He) was an amazing person."

Rivera said her father, Thom, was a Vietnam War veteran, and her mother was an artist. They lived in the area for years but only recently moved into the Steelhead neighborhood.

"They loved living on the river. They loved to garden," she said.

Webb was supposed to baby-sit for Rivera's ex-husband on Saturday morning, but she never showed up, Rivera said.

On Monday, searchers continued to comb a massive pile of sludge, fallen trees and other debris to look for survivors. Authorities said they were holding out hope but noted no one has been found alive since Saturday.

Rivera said she has braced herself for bad news. "When I saw the aerial photograph on Saturday is pretty much when I gave up hope."

She spoke in a telephone interview after returning from an American Red Cross shelter with her aunt, two sons and her ex-husband.

"We don't know what to do next," Rivera said. "There are no answers."