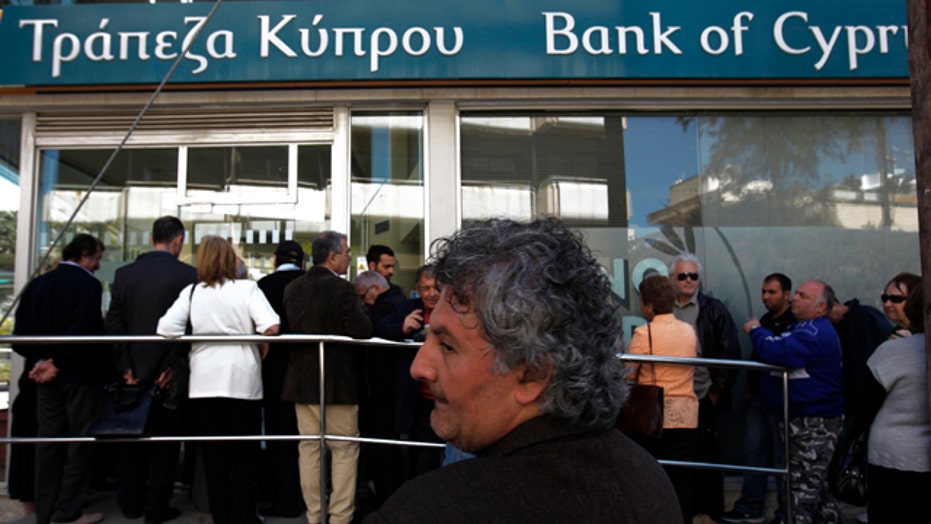 NICOSIA, Cyprus – Banks in Cyprus reopened to customers for the first time in nearly two weeks Thursday, albeit with strict restrictions on transactions, after being closed to prevent people withdrawing all their savings during the country's acute financial crisis.

Large lines had formed outside the banks ahead of the opening of banks for six hours from noon. Systems were frozen ahead of the start of business, and guards from a private security firm reinforced police outside some ATMs and banks in the capital, Nicosia.

Branches of the country's troubled second-largest lender, Laiki, didn't open on time due to a delay in the bank's computer system. Laiki spokesman Costas Archimandrites said there had been an initial issue with the bank's system but that 80 percent of branches had opened after about half an hour.

At one branch in central Nicosia which was still shut nearly an hour later, an employee emerged from the bank and pleaded for patience with the line of about 50 people. Most waited calmly, although some began to complain about being made to wait.

Banks in Cyprus have been shut since March 16 to prevent people draining their accounts as politicians scrambled to come up with a plan to raise enough funds for Cyprus to qualify for 10 billion euros ($12.9 billion) in bailout loans for its stricken banking sector. An initial plan that would have seized up to 10 percent of people's bank deposits was soundly rejected in Parliament, leaving politicians struggling to come up with an alternative.

The deal was finally reached in Brussels early Monday, and imposes severe losses on deposits of over 100,000 euros in the country's two largest banks, Laiki and Bank of Cyprus. Laiki will be broken up, with its good assets being absorbed by Bank of Cyprus. The exact amounts of the losses have not yet been officially announced.

Although the banks have opened, customers are severely limited in what transactions they can carry out. Capital controls, imposed to prevent worried savers and businesses rushing to withdraw all their money, include limiting cash withdrawals to 300 euros ($383) per day per person and limiting payments abroad to 5,000 euros.

No checks can be cashed, although they can be paid in, and people leaving the country can only take up to 1,000 euros, or the equivalent in foreign currency, with them in cash.

The restrictions will be reviewed daily and are initially in place until next Wednesday, the decision published by the Finance Ministry states.

Cyprus Foreign Minister Ioannis Kasoulides said that, according to the country's central bank assessments, restrictions on financial transactions are to be fully lifted in a month.

In Nicosia, one 70 year-old pensioner who only gave his name as Ioannis arrived at the bank some two hours ahead of the scheduled opening time.

"I had to come this early, I came from my village 20 kilometers away, what do they want me to do, keep coming and going?" he said.

Many Cypriots are struggling to work out exactly what they could and couldn't do with the restrictions in place. Morning television talk shows hosted dial-ins with experts, with viewers' queries ranging from where they would repay loans if they were taken out from Laiki, to how they could pay tuition fees for children studying abroad and handle check payments. Across the country, people wondered whether they would be able to access their salaries, many of which were due this week.

"I believe this will be a very difficult day for both people and bank employees because no matter how much information there was, things were changing all the time," said Costas Kyprianides, a grocery supplier in Nicosia. "Even us traders, like myself, have so many checks which I need to deposit so I can make ends meet."

During the bank closure, ATMs were working but quickly ran out of money. Those of the two troubled banks, Laiki and Bank of Cyprus, had imposed withdrawal limits of 100 euros a day.

"Up until last night things kept on changing," said store owner Antonis Arotokritou, wondering about how to go about dealing with checks. "There's an overall panic and uncertainty from both the bankers and the rest of the people."

"The Central Bank decided on some limitations, so we are sure that slowly, slowly we are going back to functioning of the banks without serious problems," the head of the parliament, Yiannakis Omirou, told AP. "Some problems I'm sure will be created but our people are ready to overcome the difficult moments we are passing."