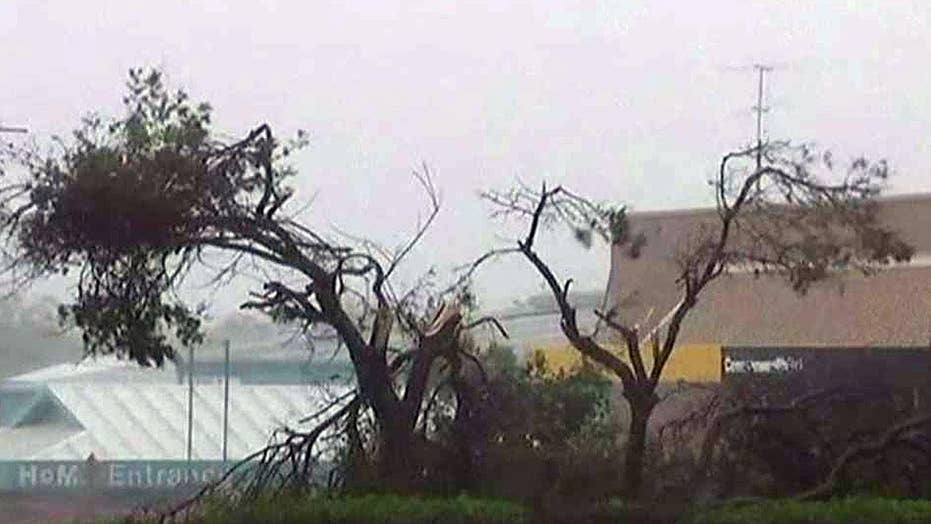 Authorities are trying to get drinking water and food to areas devastated by Cyclone Debbie, as residents are told to expect more heavy rain and power shortages for days.

More than 63,000 homes are without power, including in Mackay, Sarina, Airlie Beach and Proserpine.

Queensland Premier Annastacia Palaszczuk said there was a lot of structural damage across the Whitsunday region and the government was prioritising getting water to Daydream Island, where about 200 holiday makers and 100 staff are running short.

Efforts are being “constrained by the environment” with heavy rain, debris large waves, damaging wind gusts and abnormally high tides, still being experienced across the region.

News.com.au reporter Emma Reynolds was in Airlie Beach overnight and said people woke up to scenes of devastation this morning, with boats washed up on the beach, trees smashed through roofs and windows shattered throughout the area.

The area’s once-beautiful lagoon was filled with uprooted trees and locals and business owners are starting to count the cost, with lights dangling from electrical wires and roads blocked with debris.

“At our hotel, which is supposed to be resistant to category 5 cyclones, rooms were flooded, doors hanging from their hinges and roof tiles smashed on the ground,” she said.

“The wind is still howling and rain lashing Airlie Beach and locals say the power may stay out for a week with electricity pylons reportedly damaged.”

Nearby roads have been closed and cars left stranded — one was seen with a fridge on top of it.

Tom Humphries, a tourist from Wales, said he couldn’t wait to get away.

“It’s f***ed,” he said. “There was loads of wind, trees falling down and windows blown out in the next room and we’ve got no food left. It’s a bit of a nightmare. We’re getting cabin fever. It seems we’re stuck here for a few days at least.

“I’m sure it’s a beautiful place but for now I’m completely over it.”

The Whitsunday Islands as well as Bowen and Proserpine were some of the areas hardest hit by the cyclone.

Boatmen and women looked on in disbelief on Wednesday morning as they surveyed the damage at Shute Harbour at Airlie Beach, the country’s second biggest ferry terminal and gateway to the Whitsundays.

Piers have been destroyed and pushed up onto the bank, while sails attached to the main building have been torn to shreds.

Boat owner James Wighton says he’s never seen such “devastation”. “This is millions of dollars worth of infrastructure,” he told AAP.

“It looked like a war zone, actually,” he said.