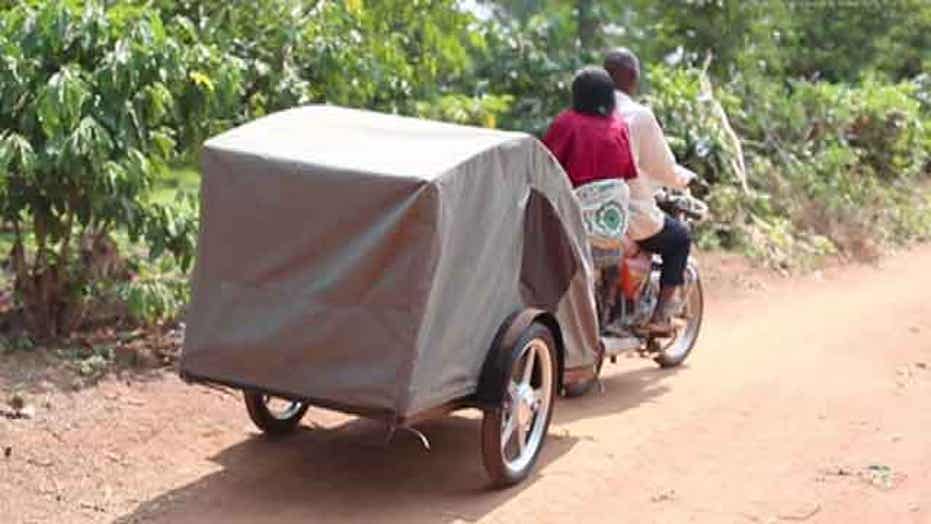 In a country where villages are miles away from the nearest dirt road, the death rate for pregnant women in Sub-Saharan Zambia is one hundred times higher than in developed nations.

But that statistic my change with the emergence of the "zambulance," a two-wheeled bicycle or motorcycle hooked up to a covered, three-by-six foot trailer.

For women in labor and Zambians with other health emergencies, the method of transportation to medical clinics has long been by way of wheel barrow, oxcart or the back of a bicycle. There are no cars in remote villages, which are connected only by walking or bike paths – creating a barrier to urgent health care that has resulted in the unnecessary deaths of pregnant women and others.

"The zambulance enables pregnant women in labor to get to a clinic with a skilled attendant," he said, noting the issue is most critical for women in need of a C-section. The mortality rate for pregnant women in Zambia and other Sub-Saharan countries is 1 in 39. The zambulances have also been used to transport bed-ridden patients for tuberculosis and HIV treatments.

The idea was conceived by 28-year-old Dustin McBride and his college classmate, 29-year-old Vaughn Spethmann, who in 2007 began manufacturing bikes for thousands of Africans – with roughly 10,000 distributed to date. In 2008, the pair began developing the "zambulance" as a way to transport pregnant women and the gravely ill to hospitals.

"I had no idea I would have the opportunity to save lives through transportation," said McBride, who graduated in 2007 from Azusa Pacific University, a Christian college in southern California.

"It's been such a blessing," he said. But, McBride added, "It’s just one link in the chain" in providing adequate and accessible health care for millions in Africa.

Approximately 1,000 zambulances have so far been distributed – mostly in Zambia, but also in countries like Malawi, Uganda and the Democratic Republic of the Congo. McBride said he hopes to have the ambulances in south Sedan by the end of this year.

The zambulance costs between $800 and $1,000 to manufacture – money that comes entirely through donations. Larson said the company has production facilities in both Uganda and Zambia, where he said villagers have been trained to weld the ambulances, assemble and paint them – an endeavor that has in turn created jobs for locals.

Several non-profit organizations, including World Vision, Samaritan’s Purse, Catholic Relief Services and Plan International, have purchased the zambulances – and the results have been life-changing.

Last month, Moses Drileyo, a young Zambian boy, fell from a tree he was climbing and hit his chest on a rock. The boy was having trouble breathing and needed urgent medical care, but the only option his mother could think of was to carry the boy on her back for 24 miles to the nearest hospital.

But when a staff member from the village's clinic received word of the boy’s condition, he suggested the two travel in a zambulance that had arrived in the village a week prior to the incident. The trailer, covered by a weather-proof canvas and hooked on to the back of a motorcycle, saved the boy’s life.

For information on how to donate, visit Zambikes.org